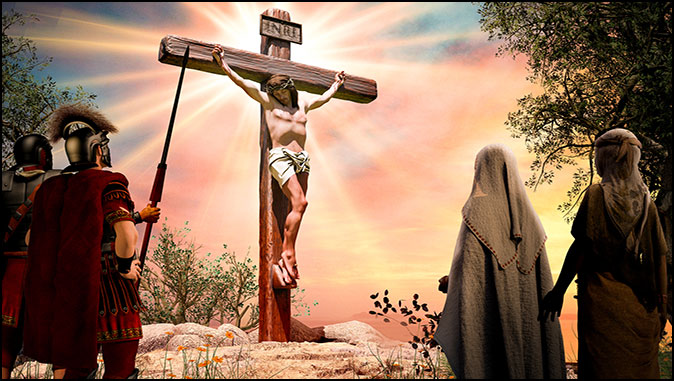 He Said I Thirst
By Dennis Huebshman

John 19:28-30; “After this, Jesus knowing that all was now finished, said (to fulfill the scripture) ‘I Thirst.’ (29) A jar full of sour wine stood there, so they put a sponge full on a hyssop branch, and held it to His mouth. (30) When Jesus had received the sour wine, He said, ‘It Is Finished’, and He bowed His head and gave up His Spirit.” (any emphasis mine)

Jesus came to this earth, and willingly became a human (lower than the angels – Hebrews 2:7-9), in order to provide the only perfect sacrifice possible for all of us imperfect people. Also, He can testify that He personally knows our feelings, pain, temptations and overall, what it is like to live as a human on this earth.

Even though tempted in person by satan himself, Jesus was able to resist and not sin. (Matthew 4, Mark 1 and Luke 4) From birth to His last breath on the cross, Jesus was the only “human” to have never sinned. There are people today that believe He may have at least sinned once, but had that happened, we would still be hopelessly lost. God the Father could only accept a perfect blood sacrifice, and knew He would have to provide the “Lamb” Himself.

From the second that Jesus bowed His head and gave up His Spirit, He was again “fully God”. His “mortal” body that lay in the grave for 3 days was raised “immortal” by the Father, just as all believers will have happen at the Rapture. Jesus was able to enter a locked room without opening a door, and He was “raptured” in the presence of His disciples, up to Heaven. We know that His Spirit was with the Father the instant He died, because He told the thief next to Him that he would be with Him in paradise that very day. (Luke 23:43) As Paul said, to die in Christ is to be with Christ. (Philippians 1:21)

Besides the reference to being thirsty on the cross, there was one other occasion when Jesus spoke of being thirsty. In John 4, Jesus asked a Samaritan woman for a drink from a well where she was drawing water.

Just speaking to this woman was against Jewish custom, as Jewish people refused to have any dealings with people from Samaria. Jesus not only let her know who He was, but in verse 23 stated, “But the hour is coming, and is now here, when the true worshipers will worship the Father in Spirit and truth, for the Father is seeking such people to worship Him.”

Please note, Jesus didn’t say “Jewish worshipers”, but “true worshipers”. This holds true today. Romans 10:13 states, “All who call on the name of the Lord will be saved.” When Jesus openly had a conversation with the woman from Samaria, He was showing He is no respecter of persons. God loves all of His creation, (John 3:16; Romans 5:8; 2 Peter 3:9) and will gladly accept anyone who receives and accepts the gift that Jesus freely gave.

Likewise, anyone who rejects that gift will not enter Heaven, but will go through the White Throne Judgment at the end of the Millennial reign of Jesus as given in Revelation 20:11-15. That goes for His chosen people and everyone else who has accepted satan. Someone might say they don’t accept satan, but to refuse Jesus is to do just that. There is no middle of the road here. (John 3:18; 1 John 5:12)

Mark Lowry is a wonderful gospel singer/writer whose mother, Beverly, was a songwriter as well. Mark had a major success with “Mary Did You Know”, written by him and Buddy Greene. His mom’s song, “I Thirst” from 1993, became a mainstay with the Cathedrals; later for Legacy Five; and also for Ernie Haas. Miss Beverly was born March 25, 1934, and passed into the arms of the Lord on December 2, 2013. This song is a wonderful legacy that she has left us.

(1) One day I came to Him, I was so thirsty. I asked for water, my throat was so dry. He gave me water that I had never dreamed of. But for this water, my Lord had to die.

(2) Now there’s a river that flows clear as crystal. It comes from God’s throne above. And like a river, it wells up inside me; bringing mercy and life giving love. (ref x2)

The lyrics and tune are simple, yet the message runs deep. By accepting Jesus as our Savior, we will be privileged to drink from the river that flows from the Throne of God. Our cost? Accept the free gift of Salvation that Jesus paid for in full with His own blood at Calvary.

We cannot buy one drop of this wonderful water, nor can we do any works to earn it. To attempt to do so would be an insult to the Son of Our Heavenly Father, one third of the Holy Trinity.

Once we have accepted Jesus as our Savior, it is natural to want to worship Him, praise and glorify His name and share kindness in honor of Him. We do not do this for material gain, but hopefully to let others know what a wonderful Savior we serve.

The time is rapidly approaching that we’re told of in 1 Thessalonians 4:13-17 and 1 Corinthians 15:51-53. There will be a trumpet blast, a call from the arch angel, and all true believers will be taken up to meet our Jesus in the air – “in the Twinkling of an eye”. To be a part of this, call on Jesus to forgive you, believe He died for our sins, and was raised from the dead to conquer sin and death for all who will receive and accept Him. (Romans 10:9-13)

Today wouldn’t be too early; tomorrow could be too late. Your choice; it’s your eternity; choose wisely.

Thank You Lord Jesus for the living water!