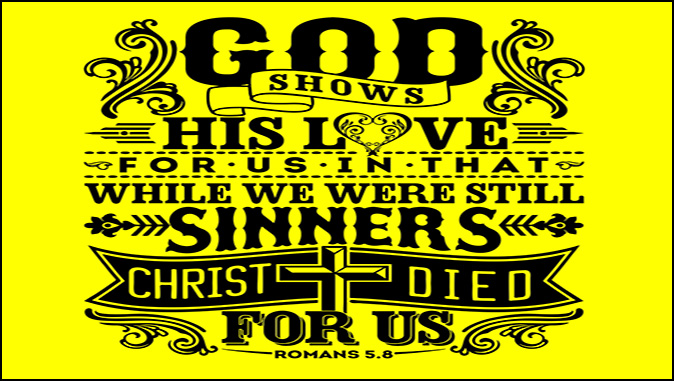 He Died For You – Live For Him
By Dennis Huebshman

Romans 5:8-10; “but God shows His love for us in that while we were yet sinners, Christ died for us. (9) Since therefore, we have now been justified by His blood, much more shall we be saved by Him from the Wrath of God. (10) For if while we were reconciled to God by the death of His Son, much more, now that we are reconciled, shall we be saved by His life.” (ESV – all emphasis mine)

There are a number of verses that will be given for your consideration. However, to try and list all verses that show the Love of the Father, you would just need to read His word from cover to cover. The Bible is undoubtedly the greatest demonstration of our Father’s love for us as given in 2 Timothy 3:16-17; “All scripture is breathed out by God, and profitable for teaching, for reproof, for correction and for training in righteousness, (17) that the man of God may be complete; equipped for every good work.”

And then 2 Peter 3:9; “The Lord is not slow to fulfill His promise, as some count slowness, but is patient toward you, not wishing that any should perish, but that all reach repentance.”

Even before Jesus came to this earth for the purpose of providing the perfect sacrifice for sin, He was prophesied about throughout the Old Testament. One example is Isaiah 53:4-5; “Surely He has borne our griefs, and carried our sorrows; yet, we esteemed Him stricken, smitten by God and afflicted. (5) But He was pierced for our transgressions; He was crushed for our iniquities; upon Him was the chastisement that brought us peace; and with His wounds we are healed.” This was approximately 700 years before Jesus physically walked upon this earth.

When the Bible uses a word such as “our” or “us”, it comes to mind that it should be “my” or “I”, because it totally applies to everyone, and that includes me. Once a person develops a true relationship with Jesus, and has asked His forgiveness, and to be their personal Savior forever, then this becomes very personal. From an early age I believed that Jesus is real, and also His death, burial and resurrection really took place, but until I actually called out for Him to save me, His sacrifice for me didn’t really sink in. I did not have a true relationship with Him.

Our Heavenly Father, Creator of the Heavens and the earth, and all that is there, actually loves us so much (John 3:16-18), that He took a part of Himself, made Him lower than the angels for a time (Hebrews 2:7), and sent Him to earth to suffer and die a most cruel death for all who would receive and accept this gift. And, it is a gift that we can neither buy nor earn, but is freely given to all who will receive and accept it as stated above.

Ephesians 2:8-9 explains this very well; “For by grace you have been saved through faith. And this is not your own doing; it is the gift of God, (9) not a result of works so that no one may boast.”

For “man-generated” religions to believe they can earn or work their way into paradise, they are grossly insulting our Lord and Savior, Jesus the Christ. Personally, I would not want to face the Father after passing from this life with this unforgivable sin on my record. All can be forgiven if the person repents and calls out to be saved before taking their last breath here.

Romans 8:1 is very specific; “There is therefore now no condemnation for those who are in Christ Jesus”. This applies to every living, breathing soul on this earth.

When the Father repeats a promise, He is emphasizing something we need to take special notice of. For example, Joel 2:32, Acts 2:21 and Romans 10:13 state that “all who call on the name of the Lord will be saved”. We can take this as absolute truth as God cannot lie. (Titus 1:2)

In Roman 8:38-39, Paul tells us just how committed our Father is toward those who have His Son as their Savior; “For I am sure that neither death nor life, nor angels, nor rulers, nor things present, nor things to come, nor powers, (39) nor height, nor depth, nor anything else in all creation will be able to separate us from the Love of God in Christ Jesus our Lord.”

John 14:6; “Jesus said to him, I am the Way, the Truth and the Life; no one comes to the Father except through Me.” Going to verse 11; “Believe Me that I am in the Father, and the Father is in Me; or else believe on account of the works themselves.”

Peter boldly declared to the religious leaders in Acts 4;12; “And there is Salvation in no one else, for there is no other name under Heaven given among men by which we must be saved.” This is the same apostle that denied his Savior three times when these same leaders had Jesus on trial as a prelude to His crucifixion. Peter had been present at many of the Savior’s miracles, yet his belief wasn’t strong enough until he actually saw the risen Lord, and witnessed the ascension, or Rapture of Jesus.

This makes John 20:29b more clear when Jesus declared; “Blessed are those who have not yet seen, and yet have believed.”

Jesus Himself gave a promise to all who would receive and accept Him in Revelation 3:20-21; “Behold, I stand at the door and knock. If anyone hears My voice and opens the door, I will come in to him and eat with him and he with me. (21) The one who conquers, I will grant him to sit with Me on My throne, as I also conquered and sat down with My Father on His throne.”

The opposite can be said for those who do not “open the door”. There will be no place in Heaven for them. They will join satan and all his fallen angels or demons, in the Lake of Fire that was prepared especially for them. (Matthew 25:41) Humans have something that satan and the demons never will; the ability to be forgiven of all our sins. There is no pathway to forgiveness for those who were with the Father in Heaven, and decided to follow lucifer.

God, Jesus and the Holy Spirit are not creations, and have always existed. This is difficult for humans to understand fully, because we’re all bound by time; which was created by the Father for us. All who belong to Jesus will have forever, immortal bodies, and we will have a mindset like our Savior’s.

We honor those who have made sacrifices that have helped to maintain our country’s freedom. How much more should we honor, and live for One who is our Creator; yet, He gave us the absolute supreme sacrifice to guarantee all who truly accept him will have an eternal Home with Him? We could be living under a totally different environment if the Father had decided we were to be created just to be slaves or bonded servants, with no hope of anything after this life.

“Jesus paid it all, all to Him I owe. Sin had left a crimson stain; He washed it white as snow.” Without our Savior’s sacrifice for us; for me; we could never be able to approach the Father at all. Nothing we could ever do ourselves could appease the Father’s need for perfection. But He did come; He willingly suffered and died for all us sinners (John 10:18); and only because of Him do we have Home waiting for us in Paradise.

Now would be a great time to call out and ask His forgiveness and to become a part of His precious flock of true followers. To delay could be the most costly mistake that we could ever make. Remember, He died for all of us – our natural response would be to Live For Him. Romans 10:9-13 gives the simple steps to eternal life with Him. He is there 24-7 to take our call.