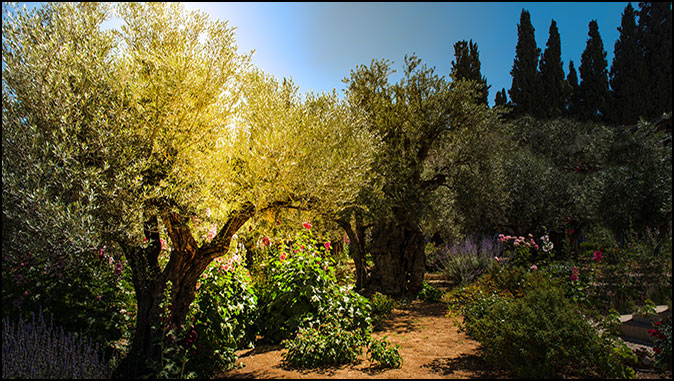 For anyone who would like to be truly inspired, there’s a YouTube video featuring a 3-year old Claire Ryan recorded in January, 2020. She is singing “Gethsemane”, and it is truly an uplift. A second video by Reese Oliveria who was 10-years old when recorded in 2015 is good also, but the one by Miss Claire affected me the most. (any emphasis mine)

Gethsemane means “oil press”, and it’s believed to be named after a grove of olive trees near Jerusalem. It’s exact location is unknown, but an olive grove on the western slope of the Mount of Olives is believed to be the site where Jesus prayed just before His arrest. (Matthew 26:36-46; Mark 14:32-42; Luke 22:39:46 and John 18:1)

On the night of His betrayal, He took Peter, James and John with Him to the Garden. He asked them to stand watch with Him while He prayed, as He knew this would be the beginning of what has been called “The Passion of the Christ”. According to scholars that are far more qualified than I, the word “passion” comes from a Latin word meaning “suffering”.

As recorded in Matthew, Mark and Luke, the apostles fell asleep, and Jesus woke them three times. After the first two, He returned to His site to continue praying to the Father. On the third occasion, He told them to get up, as Judas had brought the Temple Guards to arrest Him.

Jesus knew what was to come as it had been prophesied in Isaiah 53. He was familiar with all prophecy as He was instrumental in the prophets receiving their information. From the actual time of earth’s creation, God knew He would have to send a part of Himself in order for mankind, whom He truly loves (John 3:16; Romans 5:8), to have a pathway to Heaven. Genesis 3:15, God speaking to satan who was in the form of a serpent; “I will put enmity between you and the woman, and between your offspring (demons), and her offspring (Jesus); He shall bruise your head (Revelation 20:10), and you shall bruise His heel” (crucifixion). No human could ever make a sacrifice that would be sufficient to please God to cover our sins.

At Gethsemane, Jesus realized the full significance of what was about to take place, and said to the Father that if possible, the cup (His blood offering) be removed from Him. He ended each time saying, “Not My will, but Thine be done” (paraphrased) He obeyed the Father’s will completely.

Some have said Jesus didn’t want to go through the physical pain, but that was not the main reason that caused Him the most grief. He was prepared for all the physical abuse and torture of the crucifixion process, but what concerned Him most was knowing that for the first time ever, He would have to be totally separated from the Father. In Matthew 27:46 and Mark 15:34, He cried out, “My God! My God! Why have You forsaken Me?” This very saying is also recorded in Psalm 22:1 as a prophecy of what was to come.

When all the sins of this world; past, present and future; were laid on Our Savior, He became the “Sacrificial Lamb” that was without blemish. The Father had to look away, because He cannot tolerate sin in any form. Something that I have come to realize over the years, My Sins were part of that pain and suffering. My Sins caused Jesus the pain of being totally alone, even if for just a short time; separated from the Trinity – Father, Son and Holy Spirit.

Here was the Creator of the Universe; Lord of Lords; King of Kings; placed on a cruel cross for what mankind could not cover. Is it any wonder that the Father is so adamant that we receive and accept this “gift”, given at Calvary, as a means to be with Him forever?

At that moment in time, Jesus saw every sin that had been committed up to that point, and would be committed all the way to the end of the Millennium. Some say that would be impossible, but we have to remember, He is God (John 10:30), and is not bound by time as we are. He is omniscient (all knowing); omnipotent (all powerful) and omnipresent (everywhere at once).

We, as humans, are limited to the here and now. We have our past experiences to draw from, but cannot see exactly what will happen later this day, much less what will happen tomorrow. Many people try to saddle God with our limitations because they truly don’t know Him, nor do they make an effort to develop a relationship with Him.

When we finally call out to Jesus to be our Savior, we believe and have total faith that He really did come to this earth in human form (yet still was fully God); that He was crucified and died for sins we have committed and will commit; He rose that third day to conquer sin and death for us; All who call on Him to be their Savior will be saved. (Acts 2:21 and Romans 10:9-13)

His gift has no price tag that we can pay, and there’s no deed of any kind that we can do to earn our Salvation. To think otherwise is to insult the giver of our wonderful gift. Jesus paid the total cost, and is willing to give this gift to anyone who will truly believe in and accept Him. Please remember, He could have called off, at any moment, the ordeal He faced, but as stated in John 10:18, He willingly fulfilled what He came here to accomplish.

1.) Jesus climbed the hill, to the garden still, His steps were heavy and slow. Love and a Prayer; took Him there; to the place only He could go.

ref.) Gethsemane; Jesus Loves Me; so He went willingly, to Gethsemane.

2.) He felt all that was sad, wicked or bad; all the pain we would ever know. While His friends were asleep; He fought to keep, His promise made long ago. (ref)

3.) The hardest thing, that was ever done; the greatest pain that ever was known; the biggest battle that was ever won; this was done by Jesus; the fight was won by Jesus.

ref. 2) Gethsemane; Jesus Loves Me; so He gives His gift to me, In Gethsemane.

Just a personal note; while preparing this message, I once again watched Miss Claire’s version of this song. To say it’s emotional is a gross understatement.

We don’t know the day or hour our Blessed Redeemer will call us up to meet Him in the Rapture. Every sign that was given by Him and numerous others are all here, and for the first time all at once. To miss this wonderful event would be a terrible tragedy. The Wrath/Tribulation will make what’s happening in the world today seem calm and serene.

Remember, all who sincerely call on Jesus will be saved. He truly wants a relationship with everyone, and every true believer will not go through the terrible approaching time. (1 Thessalonians 1:10; 1 Thessalonians 5:9-10 and Revelation 3:10)

Today would not be too early to ask the Messiah into your heart. Tomorrow could be too late.

Be Careful Little Children By Dennis Huebshman Going way back to my childhood days, I…