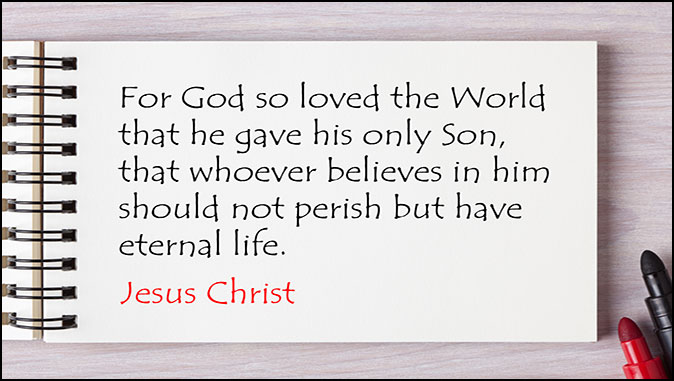 John 11:25-26: “Jesus said to her, I am the resurrection and the life. Whoever believes in Me, though he die, yet shall he live, (26) and everyone who lives and believes in Me shall never die Do you believe this?” (all emphasis mine)

Jesus was talking to Martha about the death of her brother Lazarus. Shortly after this, Jesus raised Lazarus from his grave after he had been there four days. It was truly a blessed miracle for all who witnessed it, but the reality is, Lazarus had to die again. We are not told anything about that in scripture. In fact, all the people Jesus raised while in His ministry here, had to die again. Only Enoch and Elijah are said to have been taken up into Heaven, prime examples of a Rapture; and of course Jesus Himself was raptured after His resurrection.

We have at least two instances in the Bible that addresses what happens after our earthly death. I realize that many people believe that this life is all there is, and they live a lifestyle to fulfill as many pleasures and desires that they can. Sadly, they will be completely shocked when their last breath is taken here.

Heaven has always been there, as our Creator, Jesus and the Holy Spirit have always existed. The Trinity has no beginning, and will have no end. This is a concept that is difficult for humans to understand as time was made for us at the creation. God is not bound by our time.

Satan and his fallen angels are created beings which could have existed peacefully in heaven from their creation, all through eternity. However, he allowed destructive self-pride to take over, and he defied the Heavenly Father. For him and his fallen angel followers, the Lake of Fire – Hell – was created especially for them. (Matthew 25:41) At the present time, Hell is unoccupied, but those who have already died and are lost will spend eternity there after the Great White Throne Judgment, and they have already begun their punishment wherever their souls are being held.

The first two occupants of the actual Hell will be the antichrist and false prophet of the tribulation period as given in Revelation 19:20. One thousand years later, they will be joined by their leader, satan. (Revelation 20:10) Finally, all the other lost souls from Creation to the end of the millennial reign will receive their formal eternal details of their punishment, and join them in Hell. (Revelation 20:11-15)

A second example is given to us in the writings of Paul. When a believer passes from this earth, we are assured by the examples of the beggar Lazarus in the mentioned parable, and also by Paul in Philippians 1:21-23. “For me to live is Christ, and to die is gain. (22) If I am to live in the flesh, that means fruitful labor for me. Yet, which I choose I cannot tell. (23) I am hard pressed between the two. My desire is to depart and be with Christ, for that is far better.”

Paul understood that because of his belief and acceptance of the gift of the Savior, he received a commitment to spend eternity with our Lord. Alive, the Holy Spirit was already in him; but to die, his soul would immediately be with Jesus. Our outer covering and inner organs are not who we actually are. It is our conscious soul that is truly alive. When we take our last breath in these mortal bodies, our forever soul will continue immediately.

After the Rapture, all who have died in Christ will be raised and their bodies will reunite with their souls, and be given a new forever immortal imperishable body. Those who are alive will be converted on their way up to meet Jesus in the air. (1 Thessalonians 4:13-17 and 1 Corinthians 15:51-53) No more pain or suffering, no more death, and no more being tempted by satan and his followers.

It’s all about choice. All earthly choices, no matter how important they may seem at the time, are not permanent. The most important choice to make that will last for eternity, is to accept or reject Jesus. Sadly, for many, this isn’t at the top of their priority list, or even on their list at all. They don’t realize that eternity already exists. The “I’ll get around to it later” concept could be the biggest mistake anyone could make. It is also one of satan’s greatest tools to cause someone to think they have a lot of time left.

Paul was confident with his relationship with Jesus, and the thought of dying did not cause him any distress. No one relishes the idea of the “act” of dying, but death itself should not frighten a believer in the Savior. Jesus has gone on ahead to prepare a place for us, as spoken of in John 14:1-3, and we should take comfort in His promise.

On the other hand, anyone who does not have Jesus as their Savior, should be very concerned. We’re not guaranteed another hour here, much less any extended period of time. Matthew 24:43; “But know this, that if the master of the house had known in what part of the night the thief was coming, he would have stayed awake and not have let his house be broken into.”

In my lifetime, I have witnessed many people of all ages pass from this life into death. The vast majority had not planned on this at all. One minute they were here and alive, and the next, their mortal body was dead. Whoever passed that were part of the Shepherd’s flock, received the most wonderful greeting of all. Those who were not, are as the rich man was in the parable, waiting for their final sentence, and have no hope for any other outcome.

To think of eternity as being far off is probably the biggest gamble anyone could ever make. To think you would be able to call out to Jesus as the thief on the cross did, is saying you believe that you, not the Father, control your time here.

According to all the signs present, there will be a trumpet sounded and a shout, and then all true believers will be taken up to meet Jesus in the air. There will be no other warning, and the event known as the Rapture will be over in the “twinkling of an eye”, or calculated by experts to be less than one second. After that, all who are left behind will enter the absolute worst period of time this earth has ever seen.

The only “sure bet” is to have already received and accepted Jesus into your heart prior to this event happening. Romans 10:9-13 gives the steps to be saved, and they are not complicated. The only “hard” part is for stubborn humans to believe and have faith that this is true. God did not waste His time writing fairy tales for our entertainment. He gave us the ultimate words of how to have the “gift” given by His Son to be eternally with Him. All scripture is Holy Spirit inspired, and there for everyone who will receive it. (2 Timothy 3:16)

Today would not be too early to ask Jesus to be your Savior. Tomorrow could just be too late. We have a loving Heavenly Father who wants us all to spend eternity with Him in Heaven. (2 Peter 3:9) However, it is a choice that each person has to make for themselves, and God will in no way force anyone to accept Salvation.

Right now, if you haven’t already done so, please make the most important decision of your life. No one can make it for you, and you can’t make it for anyone else. It’s up close and personal, and God will honor what you decide either way. Hope to see you at the Rapture!