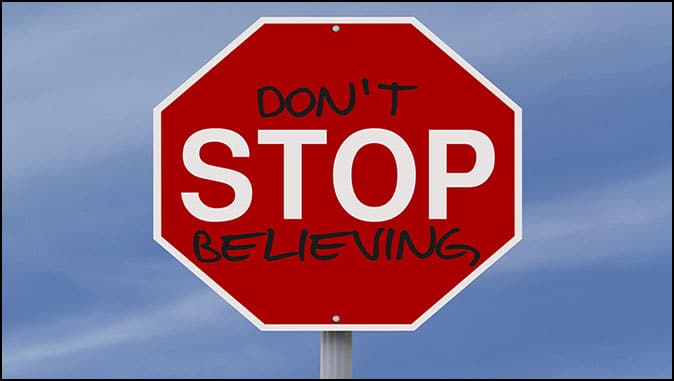 Do Not Stop Yet
By Dennis Huebshman

Although all the signs given by Jesus and others that reference the end of this age are present right now, this is not the time to sit back and do nothing. Satan and his minions are working harder than ever to draw as many souls away from the Christ as possible. He knows his time is extremely short, but he’s determined to cause as much damage as possible. Our main goal is to prepare people everywhere, who will accept Jesus before He calls all true believers Home. (all emphasis mine)

There are two future times when satan will be allowed to create total havoc upon the earth. One will be all during the 7-year tribulation/wrath, and the other will be at the very end of the Millennial Reign of Jesus on earth. After that, his fate is sealed as given in Revelation 20:10; “and the devil, who had deceived them, was thrown into the lake of fire and sulfur where the beast and false prophet were, and they will be tormented day and night forever.”

As stated, he joined the beast and false prophet who were the first occupants there. Revelation 19:20; “And the beast was captured, and with it the false prophet who in its presence had done the signs by which he deceived those who had received the mark of the beast; and those who worshiped its image. These two were thrown into the lake of fire that burns with sulfur”. This is at the very end of the 7-year tribulation.

After this, Jesus will physically be on this earth to rule for 1000 years. Revelation 20:1-3 tells us where satan will be during that time. “Then I saw an angel coming down from Heaven, holding in his hand the key to the bottomless pit, and a great chain. (2) And he seized the dragon, that ancient serpent who is the devil and satan, and bound him for a thousand years, (3) and threw him into the pit and shut it, and sealed it over him, so that he might not deceive the nations any longer; until the thousand years were ended. After that, he must be released for a little while.”

You would think that without satan on earth to draw people away from Jesus, there would no longer be any sin. After all, Jesus, one third of the Holy Trinity, will be here in person all through that time.

However, God knows human weakness and our willingness to be deceived and follow evil rather than Jesus. Just to get an idea how satan will be influential even though bound in the pit, Revelation 20:7-8 states; “and when the thousand years are ended, satan will be released from his prison, (8) and will come out to deceive the nations that are at the four corners of the earth; Gog and Magog; to gather them for battle; their number is like the sand of the sea.”

Somehow, satan will convince a large mass of people that they can win a battle against Jesus, who will be in Jerusalem. Verse 9 of Revelation 20 states that “fire came down from Heaven and consumed them.” This group and all who rejected God’s will prior to Calvary; and those who refused to receive and accept Jesus from Calvary to the end of the Millennial Reign, will go to the Great White Throne Judgment. Once and for all, evil will be removed entirely, and all who became part of Jesus’ flock will spend eternity with Him in Paradise.

Our quest right now, this very day, should be to follow the Savior’s great commission, and to spread the Gospel (Good News) as far around the world as possible. Not everyone will be a major evangelist, and not everyone has the resources to travel and reach all parts of the world. However, each of us should live as 1 Peter 3:15 states; “but in your hearts honor Christ the Lord as Holy, always being prepared to make a defense to anyone who asks you for a reason for the hope that is in you; yet do it with gentleness and respect.”

Our Heavenly Father does not force us to accept Jesus, but gives everyone the privilege to have free-will to be saved or lost. Unlike what false prophets are proclaiming, there are no other choices or options. Neither should we as followers of Jesus, be rude and forceful in our efforts of presenting Jesus to others.

There are probably those who believe we’re so close to being taken off this earth, that now is the time to just sit back and wait. We don’t know the day nor the hour, but in a number of parables, Jesus spoke about “working” until He actually comes. This doesn’t mean “works” by which we can earn our Salvation, or buy a ticket to Heaven due to any effort on our part. Ephesians 2:8-9 tells us it’s by Grace through Faith that we’ve been saved. However, once we truly have Jesus in our hearts, it’s only natural that we would want to honor Him by sharing His word with others. That could be with thousands, hundreds, or even just one person; whatever opportunity presents itself.

What a wonderful experience it would be if we were in the middle of presenting God’s word when the trumpet of God sounds, and a shout from an arch angel signals that the Rapture is taking place. At that instant, we won’t have time to get further prepared. Paul says in 1 Corinthians 15:52 that it will be “in the twinkling of an eye”, which scientists a whole lot more educated than I estimate this will be considerably less than one second.

In Paul’s first epistle that he wrote (1 Thessalonians), he describes the rapture in Chapter 4 verses 13-17. Then if we go to 1 Corinthians 15:51-53, we get more information. Even though there are numerous organized evangelical groups that do not present God’s word about taking up all believers to meet Jesus in the air to avoid the tribulation, it’s right there in His word for all to see.

Our Heavenly Father did not give us the Holy Spirit inspired writings of about 40 people to just fill pages in a book. This is no fantasy novel. When He says He will keep all believers from the Wrath/Tribulation (1 Thessalonians 1:10; 1 Thessalonians 5:9-10 and Revelation 3:10), that is a covenant that He will not break.

If the word of the Father is foolishness, as some believe (1 Corinthians 1:18), He would never have sent Jesus to be our only sacrifice for our sins that He could accept. He absolutely would not have sent Jesus to go through the agony of crucifixion if He were not serious about our souls. He loves us that much and more.

Whether today, tomorrow, a week or even months from now, when, not if, the Harpazo or Rapture takes place, would you not love to hear the words from Our Savior, “Well Done, good and faithful servant!”? Even if it’s only praying for the needs of others, Our Savior told us to love one another as well as to love His Father. He just wants us to use our talents we have been blessed with to serve Him.

The world may hate us, just as Jesus said it would, but I’d rather be hated by man than fall out of favor with our Heavenly Father. The day is coming that to proclaim Jesus as our Savior anywhere in this world will cause a person to be martyred.

Wouldn’t you really want to escape that time? Romans 10:9-13 gives the simple steps to Salvation, and Romans 8:1 is our promise that if we have Jesus, we are not condemned by the Father. Today would not be too early to call on Him as your Savior. Tomorrow could be a completely different situation.

Our Savior is always there to hear our confession, and to grant our request that He be our Savior. From that moment on, the Holy Spirit will come and reside in you. This opportunity is for everyone world-wide to receive or reject. Once we are a part of the Savior’s precious flock, our sins – my sins – will be totally forgiven and for the Father they will be removed from us as far as the east is from the west. (Psalm 103:12) The hardest part for us is to have the Faith and Believe this is so. Just remember, God cannot lie. (Titus 1:2)

Accept the gift that is being offered while you still can. After someone takes their last breath here, their eternity is set, and there is no provision to be saved after that. Have the peace of mind to know your eternity will be wonderful.