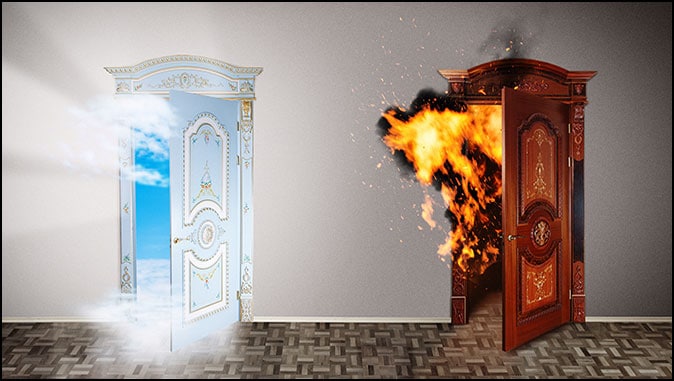 Do Not Complicate A Simple Choice
By Dennis Huebshman

Probably the largest group of people our Savior had problems with when He was here, were the “religious” leaders of His day. From the time the Law was given to Moses by God, to the era that Jesus was on the earth, it would have been nearly impossible to find God’s original words in their rules. It’s as if each new generation of priests added or changed the “Law” to put their own identity on it. (any emphasis mine)

Jesus covered a number of issues when He gave His “woe-be’s”. It seemed sabbath rules were a special bone of contention. Mark 2:27-28; “And then He said to them, the Sabbath was made for man, not man for the Sabbath. (28) So the Son of man is Lord, even of the Sabbath.” Needless to say, this did not go over very well.

Matthew 23:24;27-28; “You blind guides; straining out a gnat and swallowing a camel! (27) Woe to you scribes and Pharisees, hypocrites! For you are like white washed tombs; which outwardly appear beautiful, but within are full of dead people’s bones, and all uncleanness. (28) So you also outwardly appear righteous to others, but within you are full of hypocrisy and lawlessness.” Sounds like some who Jesus didn’t really care for.

Please know, Our Jesus loves every living, breathing soul on this earth. There were some though, that He strongly disliked. His “warnings” to them came from His heart in an obvious attempt to have them turn away from their unrighteousness, and back to their Creator – back to Him. Had they done so, He would have embraced them with true love. If any of them repented before they died, and asked Him to forgive them and be their Savior, we will see them in Heaven. (Acts 2:21; Romans 10:13)

A very simple Gospel song title of today is “Loving God – Loving Each Other”. (Bill and Gloria Gaither 1997) It covers the two commandments that Jesus gave. Yes, we will get upset with others, and may not like what they do. In fact, we may not like them as a person at all. However, each and every human on this earth has an immortal soul that will spend eternity in one of two places – Heaven or Hell.

To think of any of my loved ones not being in Heaven, is a thought almost too painful to process mentally. My prayers daily include that each and every one of them have Jesus as their Savior so that we can spend eternity with Him together. This is not just a once-a-day prayer, but as often as it enters my mind.

On a like note; my prayers call for forgiveness for anyone who has wronged me in my lifetime, in any way. Even if they never repented of trying to cause me harm, no one has caused me so much damage that I would want to see them suffer forever. I ask the Lord to forgive them, and give them something that would cause them to seek Jesus if they haven’t done so already. I have no problem thinking that even enemies here can be another soul to love in Heaven. Our “petty” issues can be overcome through the example Jesus gave on the cross when He asked the Father to “forgive them, for they know not what they do.” He was asking for forgiveness for those who were murdering Him.

It’s very obvious that there’s a turning away from, and a turning against, anything that relates to our Jesus. Christians are being targeted by laws meant to persecute and condemn us. However, Jesus Himself stated this would happen near the end of this age. John speaks of false prophets and antichrists in 1 John 2-5, that would increase in number and activity. Peter tells us of scoffers that would be here and Paul gives numerous examples of those who go against the Father, His Son, and the Holy Spirit. What we need to remember is, it’s all satan-inspired.

There are those who are trying to tweak and change the true word of the Father, to fit their immoral ways. They are trying to draw the “elect” away from Jesus and into the ranks of satan and his evil followers. God is very clear as to what He calls “abominations”, and leaves no room for “however”, “unless”, or “except for”. Any true version, no matter what the translation of God’s word, spells out specifically what He hates. It isn’t complicated, but there are those who are trying to make it so.

There are some previously bible-based evangelical organized religions, that have gone “off the book”. They lead their membership with entertainment sessions that have stimulating, non-biblical music; ear tickling messages, and tell the members they are “saved” just by being there. Seats and collection plates are filled each time of “worship”. Sadly, for many, there will be no decrease in attendance the Sunday after the Rapture.

There are those who may disagree, but I do not need to be a member of any organized “religion”, or any particular church. Today, as long as I have Jesus in my Heart, that is what matters most. I don’t worship Him one to three hours a week. He is in my heart, and on my mind every minute of every day. My relationship with Him grows stronger daily, and I know I can talk to Him at any time about anything. Sometimes, it’s just to say, “Thank You Lord, for loving me.” He’s always there, always listening, and always answers me. Sometimes the answer is “no”, but that is fine because He knows what is best for me.

The relationship that my wife and I have with Him is not exclusive. There’s no special ceremony, secret codes, deeds to be done or membership fees. He’s a “soul” person who wants a place in our hearts. Yes, He wants a relationship, and asks that we honor Him by showing our love for Him. He would like us to stop our habitual sins, but is there to forgive us when we do slip. (1 John 1:8-10)

He will turn no one away who truly calls out and asks Him to be their Savior. However, He will not force anyone to do so. It’s a free-will issue, and He will honor our choice; even if it’s that we accept the world over Him.

God sends no one to hell; they choose it for themselves. Even satan did so when his destructive self-pride challenged the Father. Heaven forever, or Hell forever. Your individual decision to make. No one else can make it for you. It’s the absolute most serious choice you will ever make. Choose wisely.