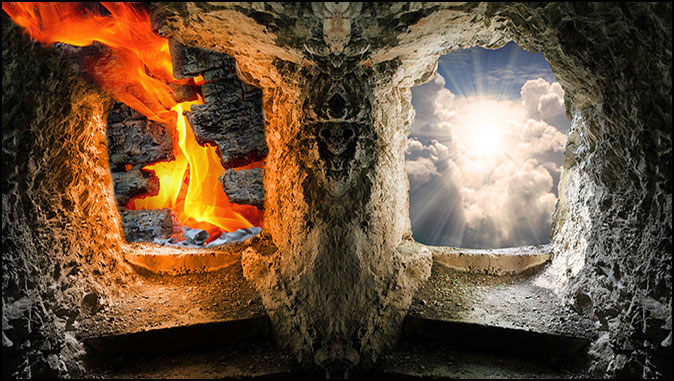 Condemned but Saved
By Dennis Huebshman

Romans 8:1-8; “There is therefore now no condemnation for those who are in Christ Jesus. (2) For the law of the Spirit of Life has set you free in Christ Jesus from the law of sin and death. (3) For God has done what the law, weakened by the flesh, could not do; by sending His own Son in the likeness of sinful flesh, and for sin (though Jesus never sinned as a human), He condemned sin in the flesh, (4) in order that the righteous requirement of the law (which itself does not save anyone) might be fulfilled in us, who walk not according to the flesh, but according to the Spirit. (5) For those who live according to the flesh (satan’s followers) set their minds on the things of the flesh; but those who live according to the Spirit (Jesus’ followers) set their minds on the things of the Spirit. (6) For to set the mind on the flesh is death, but to set the mind on the Spirit is life and peace. (7) for the mind that is set on the flesh is hostile to God, for it does not submit to God’s law; indeed, it cannot. (8) Those who are in the flesh cannot please God.” (any emphasis mine)

Paul is making it very clear that there are only two paths we can choose to follow here on earth; Heaven or Hell. The referencing of “the flesh” is all about everything that our Savior is not. 1 John 2:15-17 states; “Do not love the world, or the things in the world. If anyone loves the world, the love of the Father is not in him/her. (16) For all that is in the world – the desires of the flesh, and the desires of the eyes and (destructive) pride of life – is not from the Father, but is from the world (satan’s domain) (17) And the world is passing away along with its desires; but whoever does the will of God abides forever.”

The unforgivable sin is described in several verses. First John 3:18; “Whoever believes in Him (Jesus) is not condemned, but whoever does not believe is condemned already, because he/she has not believed in the name of the only Son of God.” John 10: 27-30; “My sheep (true believers) hear My voice, and I know them, and they follow Me. (28) I give them eternal life, and they will never perish, and no one will snatch them out of My hand. (29) My Father, who has given them to Me is greater than all, and no one is able to snatch them out of the Father’s hand. (30) I and the Father are One”

Then, John says in 1 John 5:12; “Whoever has the Son has life; whoever does not have the Son of God does not have life.” Straight to the point.

John 16:33; “I have said these things to you, that in Me you may have peace. In the world you will have tribulation, but take heart, I have overcome the world.”

From the moment of the first sin in the Garden of Eden (Genesis 3), every human born on this earth, except Jesus, has had the sin nature in us. Because Jesus’ blood never came from, nor mixed with, Joseph’s and Mary’s blood; He did not have the sin nature within Him. Though He was tempted by the master of temptation, satan himself, Jesus remained pure and holy. (Matthew 4:1-11; Mark 1:17-13; Luke 4:1-13) If He had sinned even once, His sacrifice for our sins (My Sins) would have been worthless.

God allowed people to make sacrifices through the blood of bulls, goats, sheep and doves as a “temporary” substitute. One sacrifice was never enough, and had to be repeated over and over per God’s instructions. The promise of a Messiah went back to Genesis 3:14-15. Through animal sacrifices, God was giving a preview of what would take place at the appointed time for one final and perfect sacrifice, supplied by the Father Himself.

John 3:16 is possibly the most recognized verse in the Bible; “For God so loved the world, that He gave His only Son; that whoever believes in Him, shall not perish, but have eternal life.” I’ve already given John 3:18, but it needs to be emphasized that God did not have to do what He did for us. He could’ve very well said that we were unredeemable, and everyone would go to the lake of fire when we die.

Without the love and compassion of the Father, no mortal flesh could be saved. Satan and the fallen angels have no pathway to forgiveness, as Jesus’ sacrifice was for all “humans”; not heavenly beings. They already had been in the presence of the Lord God Jehovah, and rejected Him to follow satan. Mathew 25:41 tells about the eternal fire that is prepared for them.

This is why we’re told that without the Son, we do not have the Father. Without Jesus, we do not have eternal life in heaven. Jesus made it very plain and clear in John 14:6; “Jesus said to him, I am the Way, the Truth, and the Life; no one comes to the Father except through Me.” Peter, filled with the Holy Spirit in Acts 4:12, told the Jewish religious leaders; “And there is Salvation in no other name given under heaven among men by which we must be saved.” This was given by a man who earlier had denied the Savior three times.

Because God loves us, we have a pathway to forgiveness after we have received and accepted Jesus as stated in 1 John 1:8-10. We are promised to be kept from the coming wrath/tribulation in 1 Thessalonians 1:10; 1 Thessalonians 5:9-10 and Revelation 3:10. Before anyone says they haven’t sinned since having Jesus as their Savior, please read Romans 3:23; “For all have sinned and fall short of the Glory of God.”

Every possible sign that was given about the end of this age is here for the first time, and the progression toward the introduction of the ultimate antichrist is very near. This means that the rapture of all true believers is even closer still. It could be at any minute, any day, and we will be removed from all this chaos and confusion and growing evil. There has been sin from the Garden of Eden to today, but the sheer magnitude of the increasing evil is unprecedented.

To be prepared, follow the steps given in Romans 10:9-13. Once a person has confessed they are a sinner, believed in and have faith that Jesus is our only Savior, and have called out to Him to be saved, their eternal address will be a place in Heaven, prepared by the hand of our Savior Jesus Himself. (John 14:1-3)

To pass up this gift, paid for in full at Calvary by the pure blood of the Son of God, will put you in line for the worst 7-year period of time this world has ever seen; and most likely a place in the long line at the Great White Throne Judgment of Revelation 20:11-15. And the main point here is it’s so unnecessary. All, everyone, who calls on the name of the Lord will be saved.

God is very specific about what we must do, and understandably so. He allowed His beloved Son to suffer a cruel death for us, an has the absolute right to say we must accept Jesus, or be separated from Him forever.

If you haven’t made your decision yet, today would not be too early. Satan’s lie that there’s plenty of time later is a sure way to end up with him in the lake of fire .

Call now; you won’t get a busy signal; and Jesus will personally take your call. God would never force anyone to choose eternal life, but will honor whatever choice we make. Forever is a long, long time!

Celebrate Everyday By Dennis Huebshman For many people today, the times for “celebrating” our Savior…

Face To Face By Dennis Huebshman As the world gets more and more evil, the…

Despicable By Dennis Huebshman When we hear the word “despicable”, one or more images comes…

Our God Reigns By Dennis Huebshman With all the hype that’s going on today, people…