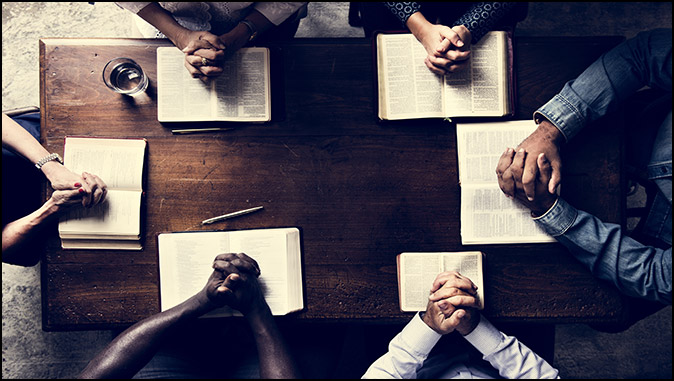 Can I Pray For You?
By Dennis Huebshman

While we are on this earth, we will have issues that sometimes seem to overwhelm us. No matter which way we turn, there just doesn’t seem to be any relief. There’s an old expression that goes, “I have to look up to see bottom!” Then, someone comes along and says, “I’m praying for you.” For a believer, those few words seem like a wonderful symphony to us. (ESV – all emphasis mine)

Now for a reality check; if we tell someone they are in our prayers, be sure that they really are. Our Savior gave us the best examples of talking with the Father, using several different methods. For example, just about everyone has heard of what’s called the “Lord’s Prayer” in Matthew 6:9. This is the one where He is teaching the disciples how to pray, and it could very well be labeled the “Disciple’s Prayer”.

Going to Matthew 6:5, Jesus also told the disciples how not to pray. “And when you pray, you must not be like the hypocrites, for they love to stand and pray in the synagogues and on the street corners so that they might be seen by others. Truly, I say to you that they have received their reward.”

The true “Lord’s Prayer” can be found in John 17. Jesus knew His mission here on earth was just about over, and this entire chapter is devoted to a most intimate “talk” with the Father that spoke of the welfare of His devoted disciples after He would depart to go back to Heaven He asked that they would be able to continue their ministry that was given to them, and at the end of verse 15 He states; “…but that You will keep them from the evil one.” He knew that the devil would do everything in his power to attack anything that had to do with Christianity, especially when He was not physically present.

A very wonderful request in this prayer that Jesus made of the Father involves every other soul on this earth that would receive and accept Him as Savior. Verses 20-21; “I do not ask for these only, but also for those who will believe in Me through their word, (21) that they may all be one, just as You, Father, are in Me, and I in You, that they may be in Us, so that the world may believe that You sent Me.” This includes all souls from the Resurrection to the end of the Millennial Reign.

Jesus had some difficult prayers with the Father in the Garden of Gethsemane just before His arrest. Matthew 26:30-56, Mark 14:32-42, and Luke 22:39-44 tells us of Jesus’ agonizing over what was to come; however, each time He ended His plea with, “Not Mine, but Your will be done.” I’m sure that some of this was the human side dreading the entire ordeal, yet His true pain went deeper than that.

There had never been a time that the Trinity was separated; not even for a minute. The Father, Son and Holy Spirit always were as “One”, yet there was about to be a change, even if only briefly. Jesus knew that when the entire load of sin that this world would ever commit was placed on Him, the Father would have to look away for a moment. Thus the cry; “My God, My God; Why Have You Forsaken Me?” (Matthew 27:46; Mark 15:34 and also in Psalms 22:1) At that very second, He became the pure sinless sacrificial lamb whose blood would take away every sin, and the only sacrifice that the Father could accept.

John 19:30 tells us that just before Jesus died, He said, “It Is Finished.” At that moment His sacrifice was complete. His Spirit would return to the Father, and all of us now have a pathway to eternal life with Him. To be on that pathway, the “gift” must be received and accepted.

Although His body was in the grave three days, His Spirit was immediately with the Father at His last breath, just as the souls of those who are In Christ are when they pass away. The verses that verify this are Luke 23:42-43; “And he said, ‘Jesus, remember me when You come into Your kingdom’. (43) And He said to him, ‘Truly, I say to you; today you will be with Me in Paradise’.” This was the thief next to Him who asked Jesus to be His Savior. When the Rapture takes place, all those souls that are with the Lord will come with Him to be reunited with their earthly bodies, no matter what is left, and to be changed forever into immortal, unperishable heavenly bodies.

Jesus experienced just about everything that humans go through, and He understands us completely. He felt the different seasons, pain, hunger, sadness along with just about every other emotion that we go through.

Mark Bishop released a song in 2004 called, “Can I Pray For You?”. It covers a lot of different issues with the main theme of sharing through prayer. Sometimes, just knowing that someone else cares enough to go to the Father for us is a giant boost.

1.) I’ve been your friend for a while; I know you’re hiding behind that smile. And you’re keeping inside, tears that should have been cried, You’ve been brave through the trial.

You’ve been as strong as a stone, against the stormy winds that have blown. But you have friends who care, more than willing to share, don’t face those troubles alone.

Ref.) Can I pray for you? Can I mention your name to the Lord? When I seek His face, can I plead your case? That’s what praying is for. I’ll help you carry your cross, and find the way when you’re lost. If we let Jesus be true, I know that He’ll see you through; can I pray for you?

2.) I know that there’ll come a day, when I have trials and need you to pray. Just like you’ve done before, you’ll mention me to the Lord. That’s why I’m here to say, let me be there for you; we’ll divide all your problems by two, and soon there’ll be three; you and Jesus and me. That’s what friends are supposed to do.

We have received the greatest gift ever, and our obligation is to open it in our hearts. Romans 10:9-13 gives the steps and a final promise at the end; “All who call on the name of the Lord will be saved.”

If you haven’t asked Jesus into your heart, now would be a perfect time to. No one has sinned so bad that He won’t forgive the ones who truly ask Him to. To pass from this earth without Jesus is unforgiveable, and the outcome is given in Revelation 20:11-15.

We pray daily, and several times a day that all our loved ones have Jesus as their Savior. It’s an individual choice, and no one can make it for you. For all who respond to Him, they can be considered ready to rise up to meet Him in the air when the call comes. (1 Thessalonians 4:13-17 and 1 Corinthians 15:51-53)

Call today; the line is always open, and there’s never a busy signal.