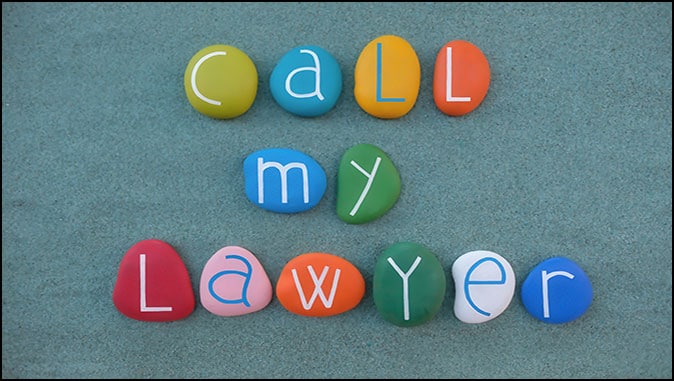 Call My Lawyer
By Dennis Huebshman

A local commercial shows a person who represents a law firm, giving advice to people who have been involved in an auto accident. He states that insurance companies will try to solicit statements and offer settlements for their own benefit. His advice is to simply state, “Call My Lawyer”, and then to not say anything else. (all emphasis mine)

The bible offers us very similar instructions when we are confronted by satan and his followers. No matter how intelligent we may think we are, and no matter how much we believe that we can outwit the devil, please know that you will be on the losing end of that battle. Satan is far more clever and intelligent than people give him credit for, and he loves it when he’s depicted as having horns, a long tail and a pitchfork. He has been stealing souls from the Father since the beginning of creation.

Satan was created as a beautiful guardian angel who became full of destructive self-pride. He decided he should be equal to God and have a throne right next to Him. Once he sinned against the Father because of that pride, his fate was sealed forever. Neither satan, nor his angels who followed him, have any pathway to forgiveness. God created the Lake of Fire specifically for them, and at the appropriate time, it will be their punishment place forever. (Ezekiel 28:14-17; Isaiah 14:12-15; Matthew 25:41)

A very dear lady sent me an email that she had received from a friend of hers. I told her it was too good not to share, and she approved my using it in this message. It’s called, “I Love My Attorney”.

“After living what I felt was a decent life, my time on earth came to an end. The first thing I remember is sitting on a bench in the waiting room of what I thought to be a court house. The doors opened, and I was instructed to come in and have a seat at the defense table.

As I looked around, I saw the ‘prosecutor’. He was a villainous looking gent who snarled as he stared at me. He definitely was the most evil person I have ever seen.

I sat down and looked to my left, and there sat my Attorney, a kind and gentle looking man whose appearance seemed so familiar to me; I felt I knew Him.

The corner door opened, and there appeared the Judge in full flowing robes. He commanded an awesome presence as He moved across the room. I couldn’t take my eyes from Him. As He took His seat behind the bench, He said, ‘Let us begin’.

The prosecutor rose and said, ‘My name is satan, and I am here to show you why this man belongs in hell.’ He proceeded to tell of lies that I told, things that I stole, and in the past when I cheated others. Satan told of other horrible perversions that were once in my life, and the more he spoke, the further down in my seat I sank.

I was so embarrassed that I couldn’t look at anyone, even my own Attorney, as the devil told of sins that even I had completely forgotten about.

As upset as I was at satan for telling all these things about me, I was equally upset at my Attorney who sat there silently, not offering any form of defense at all. I know I had been guilty of those things, but I had done some good in my life, and couldn’t that at least equal out part of the harm I’d done?

Satan finished with a fury and said, ‘This man belongs in hell; he is guilty of all that I have charged, and there is not a person who could prove otherwise.’

When it was my turn, my Attorney first asked if He might approach the bench. The Judge allowed this over the strong objection of satan, and beckoned Him to come forward. As He got up and started walking, I was able to see Him in His full splendor and majesty. I realized why He seemed so familiar; this was Jesus representing me, my Lord, and my Savior!

He stopped at the bench and softly said to the Judge, ‘Hi Dad’, and then He turned to address the court. ‘Satan was correct in saying that this man had sinned, and I won’t deny any of these allegations. And, yes, the wage of sin is death, and this man deserves to be punished.’

Jesus took a deep breath, and tuned to His Father with outstretched arms and proclaimed, ‘However, I died on the cross so that this person might have eternal life, and he has accepted Me as his Savior, so he is Mine.’ My Lord continued with, ‘His name is written in the Book of Life, and no one can snatch him from Me. Satan still does not understand yet, this man is not to be given justice, but rather Mercy.’

As Jesus sat down, He quietly paused, looked at His Father and said, ‘There is nothing else that needs to be done; I’ve done it all!’

The Judge lifted His mighty hand and slammed the gavel down. The following words bellowed from His lips… ‘This man is free. The penalty for him has already been paid in full. Case Dismissed!’

I asked Jesus, as He gave me my instructions where to go next, ‘Have you ever lost a case?’ Christ lovingly smiled and said, ‘Everyone that has come to Me and asked Me to represent them has received the same verdict as you – Paid In Full.”

First and foremost, Romans 8:1 sums up this story perfectly. “There is therefore now no condemnation for those who are in Christ Jesus.” Satan’s presentation is 100% correct, and applies to every human that has ever lived, or will live on this earth, except Jesus. Romans 1:29-32, “They were filled with all manner of unrighteousness; evil; covetousness; and malice. They are full of envy, murder, strife, deceit, maliciousness. They are gossips, (30) slanderers, haters of God, insolent, haughty, boastful, inventors of evil, disobedient to parents, (31) foolish, faithless, heartless and ruthless. (32) Though they know God’s righteous decree, that those who practice such things deserve to die, they not only do them, but give approval to those who practice them.”

If you care to take a serious look at this world today, you will see every one of the above traits taking place, along with all the attitudes of 2 Timothy 3:1-5. These are the ones who choose to reject anything that pertains to the Father, Jesus and the Holy Spirit. They would rather engage in the so-called pleasures of this world, than to be concerned with their eternal souls. They have fully bought into all of satan’s lies.

Please know and understand that even though we reject satan, and receive and accept Jesus as our Savior, we will not be sin-free as long as we are in these human bodies. God knows this, and lets us know He isn’t taken by surprise. Romans 3:23; “For all have sinned and fall short of the glory of God.” Romans 6:23; “For the wages of sin is death, but the free gift of God is eternal life in Christ Jesus, our Lord.” What we deserve is the “death” penalty, but through the willing sacrifice of our Lord and Savior, when we are His, God forgives us for all our sins.

John 10:9, Jesus said, “I am the Door. If anyone enters by Me, he will be saved, and will go in and out and find pasture.” John 10:27-28; “My sheep hear My voice, and I know them, and they follow Me. (28) I give them eternal life, and they will never perish, and no one will snatch them out of My hand.” That includes Lucifer. The verse that clinches it all is John 14:6; “Jesus said to him, I am the Way, the Truth and the Life; no one comes to the Father except through Me.”

Once a person follows the ABC’s of Salvation found in Romans 10:9-13, that person will have received and accepted Jesus as their Savior. That person’s eternal address will have changed from the Lake of Fire to paradise with Jesus. Our Savior will send us a “Helper” as given in John 14:15-17; “If you love Me, you will keep My commandments. (16) And I will ask the Father, and He will give you another Helper (Holy Spirit) to be with you forever, (17) even the Spirit of Truth, whom the world (the lost) cannot receive because it neither sees nor knows Him. You know Him, for He dwells with you, and will be in you.”

For those who do not know the ABC’s, they are as follows:

A – Admit you are a sinner and understand that we can never be “good enough” to please the Father.

B – Believe in your heart that Jesus died in our place to be the perfect sacrifice for our sins, and have faith that God raised Him from the dead to conquer sin and death for all who will accept Him. This is the only sacrifice the Father could ever accept.

C – Call on Jesus to be your Savior, and confess you are a sinner in need of a Savior. Verse 13 is God’s absolute guarantee for all who will receive and accept His Son; “All who call on the name of the Lord will be saved.”

Jesus’ death burial and resurrection covered all of the sins of those who call out to Him. For all who reject the Savior, they will answer for every sin ever committed by them at the Great White Throne. (Revelation 20:11-15) There will be no forgiveness or pardons available there. Everyone will be shown all the opportunities they had to avoid their condemnation.

Jesus will be calling all true believers to rise up to meet Him in the air very soon, to avoid the coming wrath/tribulation. Please seriously consider an eternity in a place of darkness and constant punishment for not asking Jesus to save you. This does not have to be if you will call out to Him today; right now! We don’t know the day our hour, but every prophecy that had to be done prior to this has been completed. Literally, He could come at any “minute” now.

He loves all of us so much that He would never force anyone to accept Him. Likewise, He will turn no one away that truly seeks His forgiveness and free gift. You haven’t sinned so much, that you are beyond His grace, and the mercy of the Father. He is available for your call 24-7.

Stepping On Toes By Dennis Huebshman Acts 4:19-20; “But Peter and John answered them; ‘Whether…