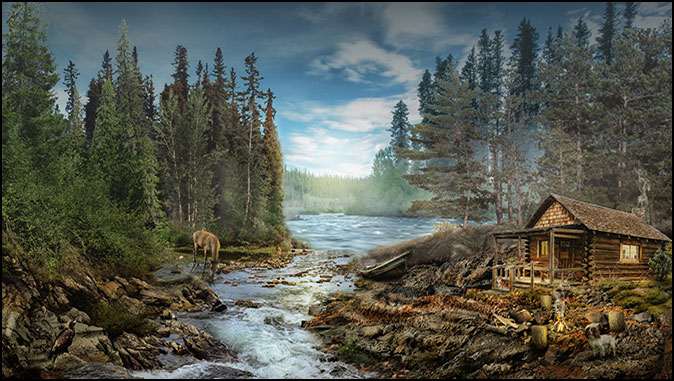 Build Me A Cabin
By Dennis Huebshman

John 14:1-3; “Let not your hearts be troubled. Believe in God; believe also in Me. (2) In My Father’s house are many rooms. If it were not so, would I have told you that I go to prepare a place for you? (3) And if I go and prepare a place for you, I will come again and take you to Myself, that where I am, you may be also.” (ESV – all emphasis mine)

John 3:16-18; “For God so loved the world, that He gave His only Son, that whoever believes in Him, should not perish, but have eternal life. (17) For God did not send His Son into the world to condemn the world, but in order that the world might be saved through Him. (18) Whoever believes in Him is not condemned; but whoever does not believe is condemned already, because he has not believed in the name of the only Son of God.”

There are a number of songs that refer to mansions in Heaven. Probably the most popular is “Mansion Just Over The Hilltop”. Another is “There Is A Mansion”; also, “Just Build My Mansion”; and “In My Father’s House”. All have been recorded by many artists, but by far “Mansion Just Over The Hilltop” probably has been recorded the most. It was written by Ira Stanphill in 1949.

One song written by Curtis Stewart of Alabama strikes home for me over all the others. It was recorded by several artists, but the version I associate with the most is by Hank Williams Senior, and was written sometime in the 1940’s.

1.) Many years I’ve been looking, for a place to call home. But I fail yet to find it, so I must travel on. I don’t care for fine mansions, on earth’s sinking sand. Lord, build me a cabin, in the corner of Glory Land.

2.) Blessed Lord, I’m not asking to live in the midst. For I know I’m not worthy, of such splendor as this. But I’m asking for mercy, while humbly I stand. Lord build me a cabin, in the corner of Glory Land. (ref)

3.) I have many loved ones, who’ve gone on their way. On the grapevine of mourning, shall I hear them say; ‘come and join in the singing, and play in our band’. Lord, build me a cabin, in the corner of Glory Land. (ref)”

Revelation 21:16-17 gives the dimensions of the new Holy City of Jerusalem. This will come down from Heaven after the White Throne Judgment of Revelation 20:11-15, and only those who will be with Jesus forever will occupy the New City. Revelation 16-17; “The City lies foursquare; its length the same as its width. And he measured the City with his rod, 12,000 stadia. Its length and width and height are equal. (17) He also measured its wall, 144 cubits, by human measurement, which is also an angel’s measurement.”

When the song says, “I’m not worthy, of such splendor as this”, consider that the wall is built of Jasper. The city is pure gold like clear glass. The foundations are Jasper, Sapphire, Agate, Emerald, Onyx, Carnelian, Chrysolite, Beryl, Topaz, Chrysoprase, Jacinth, and Amethyst. Just to let you know, I’m not familiar with about four of these elements. Also, there’s twelve gates; three on each side; and each gate is made of a single Pearl. The streets are pure gold like transparent glass. (Revelation 21; 18-21)

There is no place on this earth that can begin to compare with God’s city. Yes, there are some beautiful castles, mansions and even some cities; but their “splendor” is dull compared to what’s waiting for us. Also, there will be room enough for all who will have received and accepted Jesus after His sacrifice, and all who were in God’s will prior to Calvary.

What’s so sad is there is nothing difficult or impossible that would keep anyone from having a place in the New City. Jesus paid our “forever rent” through His shed blood on a cross that should have been ours. He paid for sins He never committed, so we could have such a wonderful forever. The price demanded by God has been paid in full!

Is there anything I can pay, or is there any deed I can do to earn a place there? Absolutely not. As Ephesians 2:8-9 states; “For by Grace you have been saved through Faith. And this is not your own doing; it is the gift of God, (9) not a result of works, so that no one may boast.”

I can totally relate to, “But I’m asking for mercy, while humbly I stand.” My Savior would be totally justified to cast me into outer darkness forever, for all the sin that was done by me in my lifetime. However, He has loved everyone to the point that He gave Himself willingly for all who would receive and accept his gift. (John 10:18)

There are requirements from God that must be met in order for a “room” to be prepared for us. The same requirements are for everyone, no matter what our lot in life is; and the last requirement says it all.

Romans 10:9-13 gives the steps; the ABC’s if you will; to becoming a member of our Precious Shepherd’s flock. (John 10)
Step one; “because if you confess with your mouth (admit), that Jesus is Lord, and believe in your heart that God raised Him from the dead, you will be saved.” This is enhanced by John 14:6 and Acts 4:12 referenced earlier. These two verses plainly state that Jesus is the only way to the Father, and therefore the only way to a Home in the New Jerusalem.

Next; “For with the heart one believes and is justified, and with the mouth one confesses and is saved. For the scripture says that everyone who believes in Him will not be put to shame.” (Also Isaiah 45:17)

One question here; what about those who cannot speak? If they can’t say “with their mouths” that they believe in Jesus and ask His forgiveness, are they lost? Everyone has a “language” they can use in communicating with the Father, even if it is silent to this world. The part that tells this is “For with the heart one believes and is justified”. The confession is to God, and when one truly believes Jesus is their Savior, their “mental” prayers to the Father are heard by Him loud and clear.

Everything that is negative about this world came about through a fallen archangel; Lucifer, satan, the devil. Every bit of the negativity of this world will go with him into the Lake of Fire forever, along with all the lost souls and the demons (fallen angels). All who reject Jesus will have done so of their own free will, and they will have chosen to be separated from Him forever.

While the concept is difficult for me to understand, My Jesus know more would reject Him than accept the free gift of eternal salvation. (Matthew 7:13-14)

The increase of evil and all the issues our Savior spoke of that will be here at the end of this age, and are here right now at the same time. It’s only a matter of hearing the Trumpet of God and the shout from the archangel, and all the believers worldwide will be taken up to meet Jesus in the air. That could take place any minute now.

To be assured you will be on that Heavenly Flight, please take a moment right now and call on Jesus to save you. It’s totally your choice, and He will turn no one away. You have not sinned so bad that He will not forgive you. Right now, the unforgiveable sin is to not have Jesus as your Savior when you take your last breath on this earth. There will be one more unforgiveable sin that will take place during the Tribulation. All who take the mark of the beast will be thrown into hell with him, the false prophet and satan.

He’s waiting for your call, and I hope He will “Build You A Cabin; near mine. Just imagine the eternal fellowship all will have at Home!