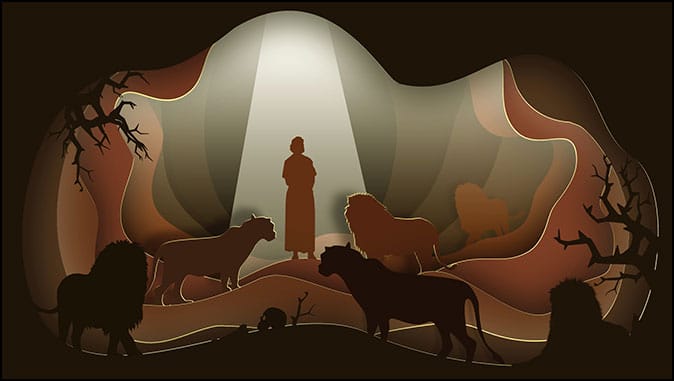 While preparing to write this message, a simple poem formed in my mind; “I sing of Your Praise; I sing to Your Glory! It is my deep privilege, to write and tell Your story.” As I relate to anyone who comments on the raptureforums.com and raptureready.com messages, they are all given to me by the Father. I am not that talented to come up with them on my own. The ones that I have tried to do without His help have ended up unpublished, and trashed. (any emphasis mine)

Going to Daniel 6, we find a plot against Daniel because King Darius held him in high regard. Daniel served his king faithfully, and with total honesty. For this, the other high officials were jealous of him, and using Darius’ ego, had him sign a declaration that they knew Daniel would go against. No one was to “petition any other god than Darius for 30 days.”

Daniel knew this had been put into effect, yet he still got on his knees three times a day before an open window in his room that faced the direction of Jerusalem, and gave thanks to the Lord God Jehovah. This was not the first time Daniel defied the ruling of a king

When first taken as a captive to Babylon, Daniel and three of his friends refused the portion of food and wine offered them by King Nebuchadnezzar. Daniel made an agreement with the steward over them, that Shadrach, Meshach, Abednego and himself were to be given only water and vegetables for ten days. God honored Daniel and his friends, and their food was shown to be healthier than that supplied by the king.

For Daniel’s “crime” against Darius, he was to be thrown into a lion’s den. For his “loyalty” to God, he spend a peaceful night in the presence of otherwise very hungry lions. The next day, his accusers and their families took his place in the den, and they were killed immediately. As for Darius, he spent a very fitful night realizing his pride might be the cause of his best high official’s death.

Our God never sleeps nor slumbers. He allows some events to take place to be used to show the words of the Bible are true and accurate. Prophecy today is being fulfilled right before our eyes, and we’re closer to going Home than we can even imagine. There are naysayers that are saying there is no “Rapture”, and we all will go through the tribulation. They haven’t considered 1 Thessalonians 1:10, 1 Thessalonians 5:9-10 and Revelation 3:10, as just three times the Father has promised to keep us from the coming Wrath. All believers that have truly accepted His Son as their Savior will not be here to be subject to the devil’s wrath through his antichrist.

Problem is, messages coming from many evangelical pulpits have turned away from His true word. As Isaiah 5:20 states, “evil will be called good, and good will be called evil.” Is that not what’s happening in the world – especially the United States – today? People are looking for “feel-good” and “ear-tickling” messages that do not tell them they are sinners in need of a Savior. The false prophets and antichrists already here as given in 1 John 2 through 5, are only too eager to give them what they want. It increases their bank accounts, and keeps the seats filled during the weekly services. Sadly, this will not end well for the “preachers” and the congregation. (Revelation 20:11-15)

In Matthew 23, Jesus gave seven “woe-be’s” that we are to watch out for. Though they were prevalent in His time, they are just as much in effect today. While speaking to the crowds, Jesus told them about scribes and Pharisees, and how they distort the “law” to serve their own purposes. In verse 3 He says, “so do and observe what they tell you, but not the works they do.”

Verse 13; “But woe be to you, scribes and Pharisees, for you shut the Kingdom of Heaven in people’s faces For you neither enter yourselves, nor allow those who would enter to go in.”

Verse 15; “Woe be to you, scribes and Pharisees, for you travel across sea and land to make a single proselyte (new convert), and when he becomes a proselyte, you make him twice as much a child of hell as yourselves.”

Verse 23; “Woe be to you, scribes and Pharisees, hypocrites, for you tithe mint and dill and cumin, and have neglected the weightier matters of the law – justice and mercy and faithfulness. These you ought to have done without neglecting the others.”

Then He gives a statement that I just love; Verse 24; “You blind guides; straining out a gnat and swallowing a camel!”

Verse 25; “Woe be you, scribes and Pharisees; for you clean the outside of the cup and the plate, but inside they are full of greed and self-indulgence.”

Verse 27; “Woe be to you, scribes and Pharisees hypocrites; for you are like whitewashed tombs, which outwardly appear beautiful, but within are full of dead people’s bones and all uncleanliness.”

Verse 29; “Woe be to you, scribes and Pharisees, hypocrites, for you build the tombs of the prophets, and decorate the monuments of the righteous saying, ‘If we had lived in the days of our fathers, we would not have taken part with them is shedding the blood of the prophets.”

Jesus ends these seven “woe-be’s” with this lament in Verse 37; “O Jerusalem, Jerusalem, the city that kills the prophets and stones those who are sent to it! How often would I have gathered your children together as a hen gathers her brood under her wings, and you were not willing!”

With each “woe-be” He goes further with the specifics of their sins. Jesus knew that in a very short time, He would be arrested because of the hate of the Pharisees, and would be put to death because of them. Sadly, if any of them repented before they died, He would have forgiven them, but it’s recorded very few did so.

This world today is making turns that we would not have thought possible just a few years ago. Evil and abominations listed in the Bible are being called good, and anything to do with Jesus is evil, just as Isaiah said over 2500 years it would be so. Christians are being singled out for persecution, and even martyrdom in some parts of the world. We are exactly where Jesus said we would be in Matthew 24, and the world has all the attitudes given by Paul in 2 Timothy 3. The events spoken of in 1 Thessalonians 4:13-17 and 1 Corinthians 15:51-53 are just about to take place.

Today, right now, it is the best time to decide who you will follow. Jesus or satan. No matter what anyone might tell you, there is no third choice. This world is getting more evil by the hour, and people are worried and very troubled by what is taking place. Just as it was in Jesus’ time, we need to look to Him, because He has overcome the world. (John 16:33)

There is only one way to Heaven, and that’s through Jesus as given in John 14:6 and Acts 4:12. The process is simple, yet many refuse to believe it is so. Romans 10:9-13 gives the steps. The main point is “All who call on the name of the Lord, will be saved!”

As stated, today, right now would not be too soon to call. For the prepared, the “trumpet of God, and the shout from the archangel” could be at any second. Jesus will turn no one away who truly receives and accepts His wonderful gift; but He will in no way force anyone to do so. Call today – He’s waiting, but not for much longer.