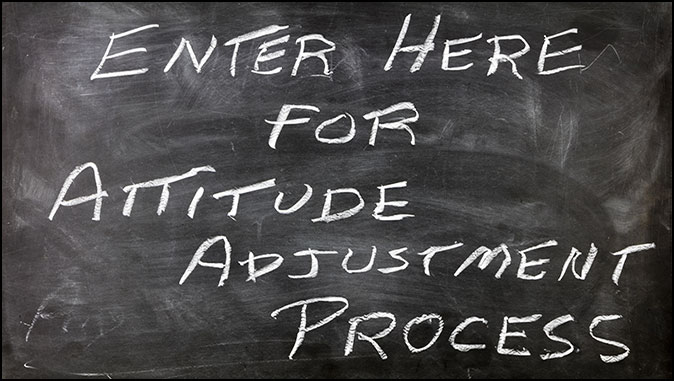 When I was in High School in the 1960’s, if someone was sent to the principal’s office for a rules infraction, that person would be subject to an “attitude adjustment” with the “board of education”. That meant the student would bend over and grab their ankles, and the principal would “administer the board” for however many whacks that the offense called for. After having this done once, not many students would go back for a second session. Not that I was perfect by any means, I am thankful that I did not break rules serious enough to have this done to me. (any emphasis mine)

As far as I can remember, there were never any lawsuit threats from parents because of this discipline. Though we did have some “issues” about some incidents back then, there were never any fears of reprisal against any of our educators because they referred to a student by the “wrong gender”. Nor was there ever a “pronoun problem”, as the students were referred to as male and female; and we knew which bathroom we were to use.

Today, some places are having “criminal charges” filed against anyone that refers to a student by anything other than what or who that student believes they are. It has gone beyond ridiculous.

Our past president stated that “transgenders” did not belong in our military services. He made a common sense case that it would be disruptive overall to allow this to happen. Our current president couldn’t wait to overturn that, and many other rulings about all the “alphabet” people in the many twisted beliefs that the radical left have. He has stated that males who identify as females should be allowed to compete as females in any sport event. Bathrooms are no longer “safe” as anyone can use any bathroom they choose without any reprisals.

As far as the radical left is concerned, all true Christian believers just need an “attitude adjustment”, and need to accept all the junk that God calls abominations as the new way of life. Well, God is not apt to change His mind on any of this, and expects us to live by the guidelines He gave to us in His holy word. It doesn’t matter how many centuries ago the Bible was composed, to our Creator, it’s as if it were released today. He is the same today as yesterday, and will be forever. (Hebrews 13:8; Malachi 3:6; Numbers 23:19; and Psalm 100:5)

Any time a writer spoke of the end of this age, it’s made clear that there would be a shift away from Heavenly things to earthly things. Jesus, Paul, Peter, John and others told us that evil will abound near the end. Current prophecy is so up to date, that the next major event that will take place will be the Rapture. That process is described in 1 Thessalonians 4:13-17 and 1 Corinthians 15:51-53. Satan is well aware of the nearness of the end, and has pulled out all the stops.

One of the main reasons we can look forward to this is we won’t go through the tribulation/wrath 7 year period of time we’re told of. This will be the worst time this earth has ever gone through, and God has promised that Jesus’ flock will not be in it according to 1 Thessalonians 1:10; 1 Thessalonians 5:9-10; and Revelation 3:10.

Another strong indicator is that the “church” is not mentioned from Revelation 6 through 19, and that is when Jesus will return with His “army” to put down the rebellion. Then He will rule from Jerusalem for 1000 years. His “army” will not be brought with Him to fight a battle, but to witness the awesome righteous power our Savior has. We will be with Him to serve as He wills, and we will cherish that service.

After the Millennium Reign, the final judgments will take place, and all sin and death will be gone forever. Those who are cast into hell (Revelation 20:11-15) will not have a pleasant eternity at all.

Those who are a part of Jesus’ precious flock will be with Him and with all the Saints in Heaven forever. We will not be sitting on clouds with our halos over our heads plucking on harps. This is what the secular world would like for us to believe. We will be truly alive for the very first time, and our service for the Trinity will be totally fulfilling and complete. No more saying goodbye to loved ones through death, and we will all have immortal forever bodies that won’t know any sickness or pain.

The true Christian “attitude adjustment” is found in Romans 10:9-13. Simply stated, confess that we are sinners; ask Jesus to forgive us for our sins; believe He truly gave us the gift of eternal life through His death, burial and resurrection; have faith and believe God will have mercy for our acceptance of the grace of His Son. This applies to everyone as verse 12 states; “For there is no distinction between Jew and Greek; for the same Lord is Lord of all, bestowing His riches on all who call on Him.”

To believe there’s many ways to heaven without Jesus, or that all religions worship the same god, or there really is no such place as hell, is to face eternal damnation with satan and all his fallen angels. Satan knows our every weakness, and without the help of the “Way, and the Truth and the Life”, we would all be lost.

No religion saves anyone. Only Jesus our Lord and Savior can do this. All who worship Him and follow the Bible are on the right track. There are some “evangelical” churches today that have turned away from the true word of God, and have “tweaked” the meanings to fit the false prophets’ motives. John tells of them in 1 John chapters 2-5, as well as the antichrists that will be here.

Today would not be too early to call on Jesus to be your Savior. His call for us to “meet Him in the air” is imminent, and could be at any moment. He will turn no one away, and no one has sinned so bad that they won’t be forgiven if they ask. The unforgiveable sin is to die without ever having received and accepted Jesus.

For reassurance, go to God’s word. If you’ve never read it, get a true bible translation that you can understand, and start with the Book of John. Then, read Romans. After that, start with Matthew and read all the way to Revelation 22:21.

Just don’t delay as doing so could put you in that terrible 7-year period spoken of. Again, today would not be too early to call. He’s never to busy to hear from us, and would delight in adding you to His true believers.

The “Possible” Dream By Dennis Huebshman Matthew 19:26; “But Jesus looked at them and said,…