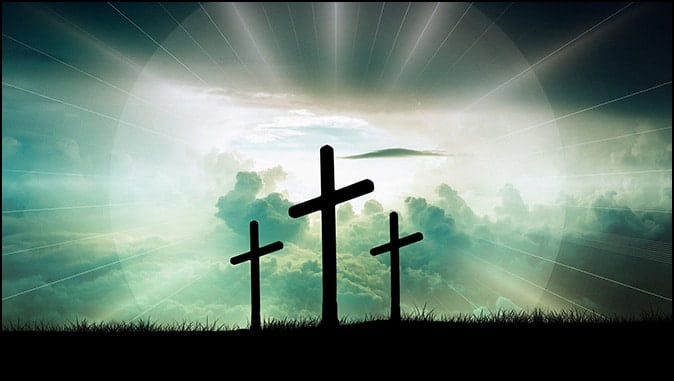 At The Cross
By Dennis Huebshman

Almost 2000 years ago, an event took place that had been prophesied centuries before, and it changed the world forever. The Creator’s Son, one third of the Trinity, came to this earth as a human, for one purpose. No sacrifice for sins up to our Savior’s arrival, could ever be permanent, because the humans offering the sacrifices were not perfect. From Genesis 3 forward, man has carried a sin nature inherited from our initial earthly parents. (any emphasis mine)

Though Jesus arrived in human form, He never gave up His Sovereignty as still being fully God. Some false prophets have said Jesus never claimed to be God, yet John 10:30 and John 14:9-11 shows us where Jesus claimed that He and the Father were One. He was not just “a good prophet”, as some will say; and He will not be coming back as allah’s servant as one major religion alleges.

One more point here, Jesus had full control and authority over all that took place during His time here. At any time, He could’ve stopped His whole ordeal. John 10:17-18; “For this reason, the Father loves Me; because I lay down My life that I may take it up again. (18) No one takes it from Me, but I lay it down of My own accord. I have authority to lay it down; and I have authority to take it up again. This charge I have received from My Father.”

Matthew 26:53-54; “Do you think that I cannot appeal to My Father, and He will at once send Me more than twelve legions of Angels? (54) But how then should the scriptures be fulfilled, that it must be?”

The part of the crucifixion that Jesus dreaded most was knowing He would, for a short time, have every sin this world would ever commit laid on Him. At that moment, the Father, who cannot accept any imperfect sacrifice, would have had to look away, and for the first and only time ever, the Son was separated from the Father. With this in mind, in Matthew 26:39, Jesus made one statement, “And going a little farther, He fell on His face and prayed, saying, My Father, if it be possible, let this cup pass from Me; nevertheless, not as I will, but as you will.” Jesus was totally submissive to what would be required for our sakes. Can you just imagine the true agony Jesus felt when He cried out “My God! My God! Why Have You Forsaken Me?” (Psalm 22:1; Matthew 27:46)

Prior to His arrest, Peter and the others said they would never leave Jesus, and would even die with Him. (Matthew 26:35) Jesus told Peter that not only would he deny the Savior three times, but that all the others would run away as well. This was fulfilled in Matthew 26:56; 69-75.

By the way, I have heard people say they would not have left Jesus had they been there. My question is, then why is the “Church” so silent about everything that is taking place today? Anyone who speaks up as a Christian is subject to persecution and being censured by the forces of satan that are gaining ground in strength and activity. All this was told that it would be so by Jesus, Paul, Peter, John and others pertaining to the end of this age.

I can’t begin to say how many times I’ve sung or heard the Hymn, “At The Cross”. I did not realize it was written in 1707 by Isaac Watts. In the past, the meaning did not really make a deep impression on me as it does today. Though written over 300 years ago, I now see the words and realize Just how much My Jesus’ sacrifice really meant for me. Not just for me alone, but for everyone who has been, or will be, on this earth.

Jesus was not a sinner, I am. I firmly believe Romans 3:23 that says we’re all sinners needing a Savior. Without His sacrifice, I know I would be facing that Lake of Fire, rather than paradise with Him forever. Though I will never claim to be worthy, I will be forever grateful that He covered My Sins on that cross. I have faith and believe that when I confessed that I am a sinner and cannot rescue myself; and that I asked Jesus to be my Savior, my eternal address changed, just the same as it can for all who will call on Him. (Acts 2:21; Romans 10:9-13)

Please take a moment and consider the lyrics of this amazing song. Some of the wording is definitely old English, but consider how they apply to us today.

1.) Alas; and did my Savior bleed, and did my Sovereign die? Would He devote that sacred head, for such a worm as I?

(Ref.) At the cross, at the cross, where I first saw the light; and the burden of my heart rolled away. It was there by faith, I received my sight; and now I am happy all the day.

2.) The body slain, sweet Jesus Thine, and bathed in its own blood. Which the firm mark of wrath divine, His soul in anguish stood.

3.) Was it for crimes that I had done, He groaned upon the tree? Amazing pity; grace unknown, and love beyond degree.’

(4) Well might the sun in darkness hide, and shut the glories in. When Christ the mighty Maker died, for man, the creature’s sin.

(5) Thus might I hide my blushing face, while His dear cross appears. Dissolve my heart in thankfulness, and melt my eyes to tears.

(6) But drops of grief, can ne’er repay, that debt of love I owe. Here Lord, I give my self away; tis all that I can do.

Knowing that my Jesus loves me, puts me into an elite class that I cherish. From the moment I truly called out for His precious gift, I have asked that He provide me the ability to honor and love Him more each day. I can truly say, my relationship with Him only grows stronger as each day passes. This can apply to any and all who call on Him.

As I have said before, I do not worship the cross in any manner, shape or form. However, when I see one, either in the form of jewelry, pictures or whatever, I am reminded of the One who took my cross; my punishment; bled and died for me; and provided an eternal home for me with Him forever. This is something I could never afford on my own.

This era on this earth is coming to an end. I will not set dates or times, but will say soon. Everything is here that Jesus said would be when He said to “Look up, for your redemption draws nigh.” (Luke 21:28-32) The clock started ticking May 14, 1948, and is nearing the so-called “midnight hour”.

Call on Him now; to delay could be the biggest mistake any could ever make. Heaven or Hell – it’s totally your choice.

He Said I Thirst

He Said I Thirst By Dennis Huebshman John 19:28-30; “After this, Jesus knowing that all…

Lamb Of God By Dennis Huebshman Revelation 5: 6-10; “And between the Throne and the…