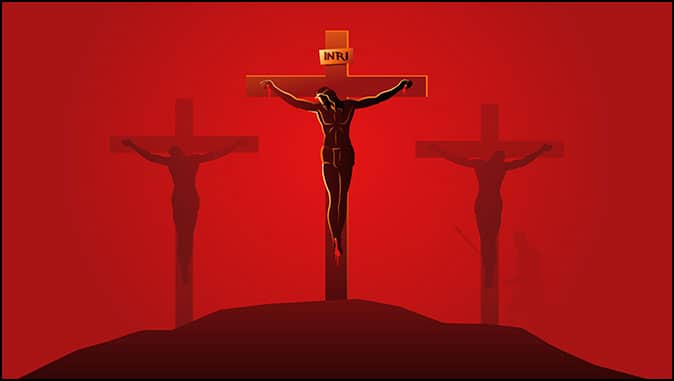 At The Cross Revisited
By Dennis Huebshman

When Jesus was hung on the cross, there were two types of people there. First, and definitely in the minority, were His loved ones, including His mother. Despite His agony, He took the time to make sure she was taken care of. John 19:26-27; “When Jesus saw His mother and the disciple whom He loved (John) standing nearby, He said to His mother, ‘Woman, behold your son.’ (27) Then He said to the disciple, ‘Behold your mother.’ And from that hour, the disciple took her to his own home.” (any emphasis mine)

The other type was the religious leaders, and those that they had influenced against the Savior. This was sort of like the false prophets today, and their followers. Whatever the followers were told to do by these leaders, they would do so as if the “blind were leading the blind.” As the old saying goes, “When the blind leads the blind, both will fall into the pit.” In this case, for the unrepentant, the pit is the lake of fire, or hell, as given in Matthew 25:41. Jesus spoke often of the “outer darkness”, and in Mark 9:47-48 He states, “And if your eye causes you to sin, tear it out. It is better for you to enter the kingdom of God with one eye, than with two eyes to be thrown into hell; (48) where the worm does not die, and the fire is not quenched.”

Our Heavenly Father has always known that the majority of the people would turn away from Him and the Trinity in order to follow their own sinful desires. This is not what He wanted for us, but from the first sin in the Garden of Eden, we have inherited a sin-nature that, individually, we need to overcome. Those who don’t will ultimately end up in hell. (Revelation 20:11-15)

Jesus spoke of the “straight and narrow path”, and also the “broad path that leads to destruction”. (Matthew 7:13-14) He stated there would be “many” on the broad path compared to the “few” on the straight and narrow one. Just looking at the attitude of the majority of the people on this earth today, our Savior was absolutely correct. It didn’t make any difference as to whether or not He would complete His sacrifice. He came for all, but knew He would die for the few.

Isaiah 5:20 says evil will be called good, and good will be called evil. Our sinful society is embracing all the alternate lifestyles that God called abominations. They are now hailed as somehow being in good standing with our Creator. The rich man of Luke 16:19-31 would absolutely dispute going against God’s word, if he could. At the moment of his death, his punishment began just as it does for all who do not have Jesus as their Savior. As for Lazarus, he was immediately at peace “in the bosom of Abraham”. Since Calvary, all who have died with Jesus as their Savior, their souls have been with Him.

From the moment a person takes their last breath here, their eternity is set. The “lost” no longer have the privilege of calling out to the Lord to be saved. (Acts 2:21; Romans 10:13) All who appear at the Great White Throne Judgment will understand what “no hope” is all about. There are no rewards or pardons at this judgment; only the final sentence as to the severity of their eternal punishment. It goes without saying that satan’s punishment will be the absolute harshest of all. This will be followed by all the fallen angels, or demons, and then all of the lost souls from Creation to the moment of that Judgment.

For the Judgments of the “saved”, they will either be given rewards, or lose rewards according to their lifestyle while on this earth. However, they will ultimately be with Jesus forever in Heaven. Their Judgement will not be for punishment, but to show how their love for the Lord will be honored. We do not earn or buy our Heavenly Home, but anything we have done in the name of Jesus will be recognized. In Matthew 10:42, Jesus pointed out, “And whoever gives one of these little ones even a cup of cold water, because he is a disciple, truly, I say to you, he will by no means lose his reward.” This applies to all females as well.

The cross is a symbol of victory over defeat, and was given to us by our Savior. We never should “worship” any image of a cross, but instead use this as a “reminder” of the price our Jesus paid so that we could be forgiven for our sins and spend eternity with Him. I see it as an implement on which my Lord suffered, bled and died for my sins. It’s absolutely amazing that my Creator would ago to such lengths to give me the privilege of living with Him forever – if I receive His gift and accept it along with His forgiveness through my confession to Him. (Romans 10:9-13)

“At The Cross” is a standard hymn written by Isaac Watts (1674-1748) in the year 1707. He used 1 Timothy 2:5-6 as the inspiration for this hymn. “For there is one God, and there is one Mediator between God and men, the man, Christ Jesus; (6) who gave Himself as a ransom for all, which is the testimony given at the proper time.”

(1) Alas and did my Savior bleed; and did my Sovereign die? Would He devote that sacred head, for such a worm as I?

(ref) At the cross, at the cross, where I first saw the light; and the burden of my heart rolled away. It was there, by faith, I received my sight, and now I am happy all the day.

(2) Was it for crimes, I had done, He groaned upon the tree? Amazing pity; grace unknown; and love beyond degree. (ref)

(3) Well might the sun, in darkness hide; and shut His glories in. When Christ the Mighty Maker died, for man, the creature’s
sin. (ref)

(4) Then might I hide, my blushing face; while His cross appears. Dissolve my heart, in truthfulness, and melt my eyes to tears. (ref)

When this song was written over 300 years ago, people were looking for the return of our Savior to take them from this world to their forever Home in Heaven. Only issue was, there were still prophecies that had to be fulfilled before that could happen.

The main one was that Israel had to be back in their land, and be a thriving nation, and that didn’t start until May 14, 1948. Since that day, everything has been done that would precede His call. As of today, the trumpet of God and the shout of the archangel is imminent, and could be literally at any moment now. On the prophetic timeline, the next major event is the Rapture of all true believers.

All the signs that Jesus spoke of, and the attitudes given by Paul, and the rise of false prophets and antichrists as given by John that would be here at the end of this age, are all here right now. Soon and very soon, true believers will be leaving this earth to be with Jesus and to be kept from going through the wrath/tribulation as promised by the Father.

Biggest question; are you ready? No one will have time to confess, repent and ask Jesus to be their Savior at the moment the Rapture takes place. “Twinkling of an eye” is calculated at less than one second. To be assured you will rise up to meet Him in the air, first, go to Romans 10:9-13 for the steps to be saved. Then go to 1 Thessalonians 4:13-17 and 1 Corinthians 15:51-53 to see what will take place at the instant of His call.

John 14:6 and Acts 4:12 tell us that Jesus is the only way to the Father. There are no shortcuts or any other ways, which are being put out by the false prophets. Satan wants you to believe all the lies, and he understands completely he was defeated by the risen Christ and an empty tomb. His goal now is to take as many souls to torment with him as he possibly can. If you are a believer, he especially wants you, and will use any and all measures to deceive you.

By receiving the gift that Jesus gave willingly at Calvary, and accepting Him as your Savior, satan cannot override this. Joel 2:32; Acts 2:21 and Romans 10:13 all say that all who call on the name of the Lord will be saved. Be a part of this “straight and narrow” group. You will be thankful for all eternity that you have Jesus. He knows you will slip and sin all the way to your leaving this earth, but will forgive you when you confess and ask Him to. (1 John 1:8-10)

He took your sins – my sins – to that awful cross, and He would like you to accept Him and be a part of His precious flock. He won’t force you or anyone else, but will accept all who truly call on Him for their Salvation. Call today; tomorrow could be too late.