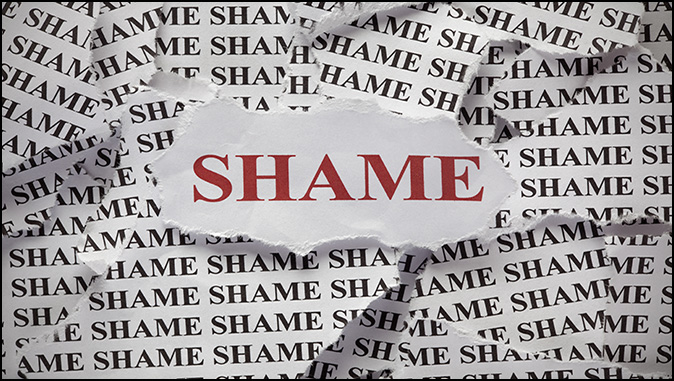 Ashamed of Jesus? Shame On You!
By Dennis Huebshman

The attitude of the world today, and even in the United States, is that anything that has to do with Christianity is to be condemned. A previously very small group of people has come out from behind closed doors, and are declaring that all “love” is absolutely to be allowed. This would include same sex, pedophilia, transgender and whatever they can dream up. They are gaining followers daily. Because followers of Jesus will not participate in such activities, we are called “haters”. Our stance for Jesus makes others uncomfortable, and therefore, in their opinion, we need to be silenced. They have made a lot of noise against us, and are getting more vocal every day. (ESV all emphasis mine)

First and foremost, I hate no one as commanded by my Lord and Savior. That does not mean I have to accept any lifestyle that my Heavenly Father calls abominations. Those who participate in such activities have not committed the unpardonable sin, and could be forgiven if they would repent and call out to the Savior for forgiveness. However, satan and his demons are very adept at putting the desires of this world in the minds of people, and turning them away from eternity in Heaven. It’s the perfect example of Isaiah 5:20; “Woe to those who call evil good, and good evil; who put darkness for light and light for darkness; who put bitter for sweet and sweet for bitter.”

How about John 3:18; “Whoever believes in Him is not condemned, but whoever does not believe is condemned already, because he has not believed in the name of the only Son of God.” The apostle also wrote in 1 John 5:12; “Whoever has the Son has life; whoever does not have the Son of God does not have life.” John 3:35-36 follows this with; “The Father loves the Son, and has given all things into His hand. (36) Whoever believes in the Son has eternal life; whoever does not obey the Son shall not see life, but the wrath of God remains on him.”

In John 10:9, Jesus says; “I am the door. If anyone enters by Me, he will be saved, and will go in and out and find pasture.” Then turning to John 14:6; “Jesus said to him, I am the Way, the Truth and the Life; no one comes to the Father except through Me.” In Acts 4:12, Peter emphasizes this with; “And there is Salvation in no one else, for there is no other name under heaven given among men by which we must be saved.” So much for those who say there’s “many ways” to heaven.

Paul says in 1 Corinthians 1:18; “For the word of the Cross is folly to those who are perishing; but to us who are being saved, it is the Power of God.”

One may think that with all the evil and unrest that’s taking place today, people would be looking for a reason to be positive in such a negative setting. Jesus understands our nature, and knew there would be less that would receive and accept Him over this sinful world. Matthew 7:13-14; “Enter by the narrow gate. For the gate is wide and the way is easy that leads to destruction; and those who enter by it are many. (14) For the gate is narrow, and the way is hard that leads to life, and those who find it are few.”

Even in His day, Jesus knew people would rather follow the masses than be put out of the synagogue. That’s the easy way. For those who decided to receive and accept Jesus, their decision was unpopular with the hypocritical religious leaders, and they would be considered “infidels” at the very least. The hard way was to go against the grain, even if it were to mean martyrdom.

This is something we are hearing of even today. In some African, Arabic and other nations, people are being killed who profess a belief in our Lord and Savior. Some are even given the opportunity to recant and turn against Jesus, but their conviction is such that they would rather face death than go against the Savior. They are following Matthew 16:25; “For whoever would save his life would lose it; but whoever loses his life for My sake will find it.”

What we are witnessing today seems totally foreign to us with the increased satanic activities. However, for anyone who has done any study of end-time prophecy, we’re right on schedule. Paul lists numerous attitudes and activities in 2 Timothy 3-5 about the end of this age. We are the generation that saw Israel become a nation again after about 2000 years on May 14, 1948. That started the end-time clock ticking toward the end of this age. We could be called up in the Harpazo, or Rapture, at any moment. Our Father promised that the flock of the Shepherd would not go through the wrath.

All who are true believers who have received and accepted Jesus as Savior are looking forward to that call. Paul describes them in 1 Thessalonians 4:13-17 and 1 Corinthians 15:51-53. Prophecy experts that far more qualified than I, are proclaiming the rapture is imminent. The world looks at us as being crazy, but God doesn’t make idle conversations. We have to be gone from here so that the man of lawlessness can come forward. That’s covered in 2 Thessalonians 2. The restrainer would be the Holy Spirit, and to remove Him means all that He indwells must be removed also.

Those who will be left behind will face a world that will be worse than has ever been. It will still be possible to call out to Jesus and be saved, but it will more than likely result in death. The evil antichrist will not tolerate worship of anyone else, but himself. Anyone who takes his mark, and worships him will not receive forgiveness. It will be eternity in the lake of fire.

To avoid this scenario, right now would be a great time to receive and accept Jesus as your Savior. Romans 10:9-13 gives the process which is not difficult at all. The final verse (13) states clearly; “All who call on the name of the Lord will be saved.”

It’s a free-will decision that the Father will force on no one. He will allow anyone to not choose His Son, but they will end up at the Great White Throne Judgment of Revelation 20:11-15. He does not want anyone to fail (2 Peter 3:9). He would much rather that everyone repent and ask Jesus to save them. Only those who do not will be condemned.

Time is getting short, and all believers could be leaving very soon. There’s room for more, and today would not be too early to choose eternal life. Meanwhile, all of us who have the gift Jesus provided for us are saying; “Amen! Come Lord Jesus!”

Jesus The Gentle Shepherd By Dennis Huebshman Not too long ago, the song “Oh Gentle…