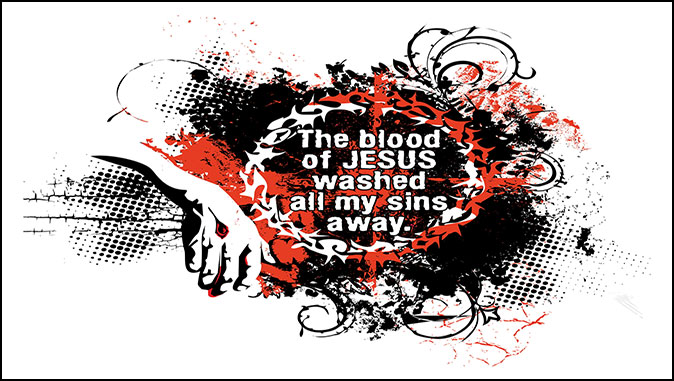 Are You Washed?
By Dennis Huebshman

Because of all the faux “religion” that is around today, claiming to be a “true Christian” takes on a very serious meaning. Anyone who truly desires to be saved for all eternity, and have a relationship with Jesus right now, can know for sure whether or not they are really saved. Just know that “religion” saves no one – only Jesus does. (all emphasis mine)

Jesus did not come to this earth as our perfect sacrifice to say it was only for a certain nation, or a certain group of people. While it’s true that He came to the Jews first, in John 10:16 He made it clear His gift was for everyone. “And I have other sheep that are not of this fold. I must bring them also, and they will listen to My voice. So, there will be one flock, one Shepherd.” When He references “this fold”, that was the Jews. “Other sheep” referenced everyone else.

We should know that the word “all” means every – without exception. In three verses, it is written that “All who call on the name of the Lord will be saved”; Joel 2:32, Acts 2:21 and Romans 10:13. There are other Bible verses that makes reference to this, but these three are plain, simple and directly to the point.

In 1 John 2:18-19, the apostle states; “Children, it is the last hour, and as you have heard that antichrist is coming, so now many antichrists have come. Therefore, we know that it is the last hour. (19) They went our from us, but they were not of us; for if they had been of us, they would have continued with us. But they went out, that it might become plain that they are all not of us.” Satanic influence is growing stronger daily worldwide.

Today, there are some very notable names of so-called “Christian pastors”, yet many have turned away from giving the true word of the Father. John spoke of false prophets and antichrists that were already present in the first century, and he also gave warnings that their activities would increase as time passes. As stated, this is happening right now.

Likewise, in 2 Thessalonians 2, Paul spoke of what would take place. In verse 7, he stated; “For the mystery of lawlessness is already at work. Only He who now restrains it will do so until He is out of the way.” Everyone who has received and accepted Jesus as their Savior has the Holy Spirit indwelling them. This is the influence that presently holds the ultimate antichrist back from making his appearance today.

In theatres, we have seen “Previews of Coming Attractions”. In today’s world, there are previews of the coming wrath of God, also known as the tribulation. There is a definite dividing line between believers and non-believers, and animosity is growing toward anything that even hints of Jesus. Though we are commanded to love everyone, satan’s policy is one of hate and persecution. His followers are responding to his will with increasing force.

By the way, we are to love everyone for their eternal souls, and realize that every person on this earth is a brother or sister. However, this in no way means we must accept their lifestyles, and there are those that we don’t even have to like. Our Savior set that example as He loved everyone; however His greatest issues were with the “religious leaders”, who He chastised regularly. If any of them repented and called out for forgiveness before they died, they will be with Him in Heaven. Those who didn’t, will be separated from Him forever.

Paul was raised as a strict Pharisee, and initially he persecuted people who were of the “Way”, as Christianity was first labeled. His hatred and zeal toward shutting them down was known far and wide. That is why that after his encounter with Jesus on the road to Damascus, people found it difficult to accept his “conversion” as being real. Paul suffered in many ways for his proclaiming that Jesus is the only true Messiah, but as he said, he counted everything as loss compared to the value of knowing and serving Jesus as Lord. (Philippians 3:7-9)

Some former bible-based evangelical churches are proclaiming today that what God called abominations in the Bible, no longer apply. Supposedly, all “sexual” relationships are stated to be an “act of love”, and therefore are right in His eyes. The truth is, God has not changed His mind, nor will He ever condone any relationship except for what He called pure and holy.

Just go to Matthew 7:13-14, and read what Jesus said about the broad path that leads to destruction, compared to the straight and narrow path that leads to eternal life. The Father, Son and Holy Spirit are not surprised by anything that is taking place today.

As believers, we need to be looking up, because Jesus said that when these things begin to happen, His coming is soon. (Luke 21:28) Of course, when this is brought up, and we try to advise others just how close the Rapture most likely is, it’s said that this has been the same as always, and it’s just a myth.

Going to 2 Peter 3:3-4, even in the first century it was said; “knowing this first of all, that scoffers will come in the last days with scoffing; following their own sinful desires. (4) They will say, ‘Where is the promise of His coming? For ever since the fathers fell asleep, all things are continuing as they were from the beginning of creation’.”

When God makes a promise, it is absolute. Paul tells us in 1 Thessalonians 4:13-17 and 1 Corinthians 15:51-53 about the soon to take place Rapture, or taking up, of all believers to meet Jesus in the air. The speed is compared to the “twinkling of an eye”, or considerably less than one second. No matter how satan tries to convince everyone this is foolish (1 Corinthians 1:18), we know it is very real.

The main question is, are you ready? As Elisha A. Hoffman (1839-1929) wrote in a song in 1878, “Are You Washed In The Blood?” While this may seem gross to some, for the Savior’s flock, it means all our filthy sins are made sparkling clean through the pure sinless blood sacrifice that Jesus gave for us. In human form, He was the only person who never sinned. His blood was the only “payment” that the Father could accept because of His requirement for perfection. He knew that no other human could ever provide such a pure sacrifice, so He sent His Son in our place. Please consider this classic Hymn, and it’s pressing significance for today.

Romans 10:9-13 gives the steps, or ABC’s, to Salvation. If you have called on Jesus, you have been “washed” in His blood, and your eternity is assured to be with Him.

Refusal to receive and accept the Savior is the unforgiveable sin, and your destiny will be the Great White Throne Judgment of Revelation 20:11-15, and then cast into the Lake of Fire. There is no other option available.

It’s totally up to each and every individual to choose. John 14:6; Acts 4:12; Romans 8:1 and Romans 5:8 are very specific, Jesus is the only way to eternal life in Heaven. Believe, receive, and be washed in the Blood of the Lamb today.