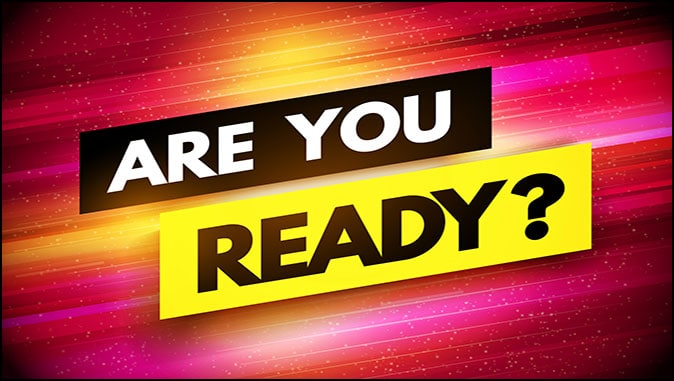 Are You Ready Revisited
By Dennis Huebshman

Just over three years ago in March, 2018, I was able to post a short message about being ready when Jesus calls us Home. There was a poem included from an unknown author, that means even more today than it did then. I will include that poem further on in this message, and it’s based on “Twas The Night Before Christmas”. (all emphasis mine)

To say there have been changes in this world over the past three years would be a huge understatement. Prophecy experts are scrambling to get “end of this age” information out to the masses. If only we would get true and accurate news broadcasts from the networks, we would see current events unfolding that could’ve been taken directly from the pages of the Bible.

For example, how about a locust plague that started in Africa, and spread through much of the middle east all the way to China. In America, there’s an infestation of grasshoppers in several states that are destroying crops and fields that are used to feed livestock. Weather patterns are creating issues from total drought in some areas, to severe flooding in others. Wildfires in the west coast states are laying waste to massive acres of land, and we are experiencing calamity after calamity.

In 2018, the United States and Israel had a very good relationship, as our President and their Prime Minister had a mutual respect for each other. This was the first time this was evident since Harry S. Turman cast his vote to grant Israel sovereignty on May 14, 1948. Before that happened, Israel had mostly been a waste land from about AD-70. During the Trump administration, he agreed that Jerusalem should be recognized as the proper capital of Israel.

Today, there is new “leadership” in both nations, and our new government is actually implying that Israel is trespassing on the land that was granted to them by the Heavenly Father. No one is taking into account that the Lord God Jehovah personally granted them, not only the small parcel of land they reside on, but several times the size of that area. Also, for a group of people (Palestinians), that have never been a sovereign nation to try to lay claim that the land of Israel actually belongs to them, is ludicrous.

We are seeing Zechariah 12:2-3 coming to life. “Behold, I am about to make Jerusalem a cup of staggering to all the surrounding peoples. The siege of Jerusalem will be against Judah. (3) On that day, I will make Jerusalem a heavy stone for all the peoples. All who lift it will surely hurt themselves. And all the nations of the earth will gather against it.” (English Standard Version)

In order for the Ezekiel 38 war to work according to prophecy, even the nations that were friendly with Israel would have to be taken down from any level of world power, and they would not be able to respond to an attack against God’s chosen people. That would include America.

We are seeing Ezekiel 38:4 being set up by God today. “And I will put hooks into your jaws, and I will bring you out, and all your army, horses and horsemen; all of them clothed in full armor, a great host; all of them with buckles and shield, wielding swords.”

Once the armies of the coalition attack Israel, God will be the one to defeat them, and in a manner that will be obvious as to who the victor actually is. (Ezekiel 39:3-7) The coalition is listed as Russia, Iran and Turkey, along with some other smaller nations, and the hook appears to be the great wealth Israel has in natural gas and oil deposits. Each of the coalition nations is having severe financial problems, and there sits tiny Israel just “ripe for the picking”; or so they think.

Therefore, for anyone to believe that all that is taking place is just random activity, we need to know that God’s plan is proceeding exactly as prophesied. That includes all the satanic activity that is taking place, along with the rise of false prophets in many organized evangelical churches. The “abominations” given in the Bible are being presented today as the “new normal”.

Isaiah 5:20; “Woe to those who call evil good, and good evil; who put darkness for light, and light for darkness; who put bitter for sweet, and sweet for bitter.”

And of course, there’s God’s eternal covenant with Abraham in Genesis 12:3; “I will bless those who bless you, and him who dishonors you, I will curse; and in you, all the nations of the earth shall be blessed.” Question, have we seen any evidence that this has taken place? Have there been any nations that were prosperous over the past few years that are now losing ground rapidly? At this point, I will leave that for the people more qualified to give a full answer.

AS for the poem, it’s an invitation to read it and then consider where you are in a relationship with the Savior right now It’s not difficult for anyone to call out to the Savior, and be assured the scenario of this poem doesn’t happen to them. First the Poem:

Twas the night before Jesus came, and all through the house; not a creature was praying, not one in the house.
Their Bibles were lain on the shelf without care, in hopes that Jesus would not come there.
The children were dressing to crawl into bed, not one ever kneeling or bowing a head.
And Mom in her rocker with baby on her lap, was watching the Late Show while I took a nap.
When out of the East there arose such a clatter, I sprang to my feet to see what was the matter.
And to the window I flew like a flash; tore open the shutters and threw up the sash; when what to my wondering eyes should appear, but Angels proclaiming that Jesus was here.
With a light like the sun sending forth a bright ray, I knew in a moment this must be THE DAY!
The light of His face made me cover my head, it was Jesus returning just like He had said.
And though I possessed worldly wisdom and wealth, I cried when I saw Him in spite of myself.
In the Book of Life which He held in His hand, was written the name of every saved man.
He spoke not a word as He searched for my name, when He said “it’s not here” my head hung in shame.
The people whose names had been written with love, He gathered to take to His Father above.
With those who were ready He rose without a sound, while all the rest were left standing around.
I fell to my knees, but it was too late, I had waited too long and thus sealed my fate.
I stood, and I cried as they rose out of sight,
Oh, if only I had been ready tonight.
In the words of this poem the meaning is clear, the coming of Jesus is drawing near. There’s only one life, and when comes the last call,
We’ll find out the Bible was true after all!

We are definitely at the Luke 21:27-28 point where all the things Jesus spoke of have begun to happen. We’re even closer by far than when I first posted this over three years ago. I believe we are in a 2 Peter 3:9 situation, where the Father is giving as many chances as possible for people to call out and be saved.

However, the day is coming, just as with Noah, when God closed the door to the ark, and brought down the rain. This time, there will be a trumpet and shout, and a number of people won’t be here anymore. Those who are left behind will be the ones to face the new world order; one world government; one supreme and totally evil world leader. That person will be indwelt by satan, and will cause suffering greater than ever before.

Romans 10:9-13 gives the steps to be saved, and asks us to call out to Jesus. Ephesians 2:8-9 tells us we’re saved by grace, not works. John 14:6 is the absolute verse that says Jesus is the only way to the Father, and to have eternal life with Him.

For anyone who has not read the bible before, I would suggest first reading John then Romans in a true translation you can understand. First and foremost, we must believe and have faith that the Bible is the true inerrant word of God. Paul tells us such in 2 Timothy 3:16, and Peter does the same in 2 Peter 1:20-21.

Don’t get caught without your name being listed in the Book of Life. Call on Jesus today; He will not turn anyone away who truly seeks a relationship with Him. Ask His forgiveness of all your sins, and He will grant it. After all, He paid the total price on the cross with His pure blood for each and every person who will receive and accept Him. Today would not be too early to change your eternal address.

Ahava B’Shem Yeshua – Love in the name of Jesus!