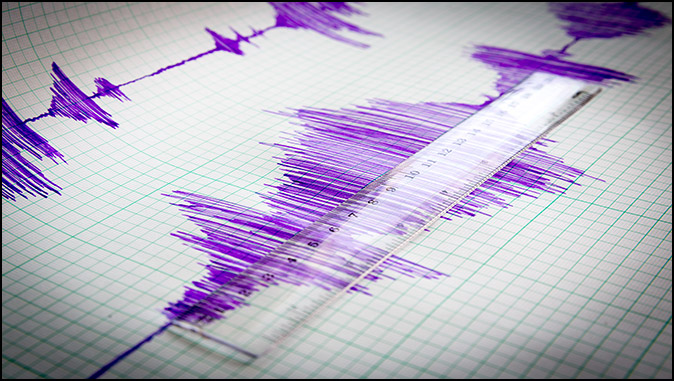 Any Reports On Earthquakes Lately?
By Dennis Huebshman

In case you missed it, there were reported earthquakes in California of magnitudes 6.4 and 7.1 in just the past week or so. Although there was considerable damage and some injuries reported, so far there were two deaths reported at the site of the 6.4, but none at the 7.1. Worldwide, there have been at least 145 earthquakes with a magnitude of 3.3 or greater over the past year. Quakes with less than 2.0 have been recorded in the thousands on the U.S. West Coast alone. There is a prediction that a major quake of at least 9.0 is due along the San Andreas fault. It’s said this occurs about every 500 years, and the last major one was in the 1700’s. (ESV – any emphasis mine)

Volcanic activity has increased in various locations, and severe record-breaking weather patterns are taking place like never before. Lest we forget, there was a huge locust infestation in Africa a couple years ago that spread all the way into Asia.

For those “scoffers” of 2 Peter 3, who say nothing has really changed, but everything is the same as it always has been, the above issues are only a few of the changes we have seen over the past couple years.

America was founded on Christian principles, and one of the Rights listed is the Freedom Of Religion. There are numerous and varied secular groups that have interpreted this as freedom from religion. Our Lord and Savior did not force Himself on anyone, but allowed all to personally choose whether or not to accept Him. That has not changed today, and never will.

However, there are various groups that are obviously satan inspired, and are doing everything to push the “alphabet” agenda and the gender-related issues. Drag Queens are being allowed in some schools for “story hour”, even in the lower pre-teen grades This is seen as a new progressive normal. However, at the same time, any programs that relate to Jesus are being shut down as “hate” speech. Supposedly, anything that is about Jesus is damaging to the minds of our youths of today.

Jesus, Paul, Peter, John and others stated there would be false prophets in these last days. They will bring “ear-tickling” messages designed by satan to draw believers away from the Lord. There are some previously bible-based churches today that have allowed “teachers” to twist the word of the Lord to make the members more at ease in attending their services. They avoid any reference to sin, and at the same time try to “modernize” God’s word. They definitely avoid anything related to end-time prophecy.

Just a few verses about the Word of God. Matthew 24:35; “Heaven and earth will pass away, but My words will not pass away.” Hebrews 13:8; “Jesus Christ is the same yesterday, and today, and forever.” Next is 2 Timothy 3:16; “All scripture is breathed out by God and profitable for teaching, for reproof, for correction and for training in righteousness.”

There are those who try to convince others that Jesus was just a good prophet, but is not really God. John 1:1; “In the beginning was the Word, and the Word was with God, and the Word was God.” John 10:30; “I and the Father are One.” And then 2 Peter 1:21; “For no prophecy was ever produced by the will of man, but men spoke from God as they were carried along by the Holy Spirit.”

As for being indwelt by the Holy Spirit after receiving and accepting Jesus as our Savior; Romans 8:9; “You, however, are not in the flesh, but in the Spirit, if in fact the Spirit of God dwells in you. Anyone who does not have the Spirit of Christ, does not belong to Him.”

In John 14:15-17, we have the promise of our Savior about His true followers receiving the Spirit; “If you love Me, you will keep My commandments. (16) And I will ask the Father, and He will give you another Helper to be with you forever, (17) even the Spirit of Truth whom the world cannot receive, because it neither sees Him nor knows Him. You know Him for He dwells with you, and will be in you.”

So, if we love our Savior, Father and Holy Spirit, we will never sin again, right? Romans 3:10; Romans 3:23 and Romans 6:23 all say different. As long as we’re in human form, we will sin We do what we can to eliminate habitual sin, but when we fall, as we all will, God has given us 1 John 1:8-9; “If we say we have no sin, we deceive ourselves, and the truth is not in us. (9) If we confess our sins, He is faithful and just to forgive us our sins, and to cleanse us from all unrighteousness.”

We don’t have a license to just keep on living as before, but we have an absolute pathway to forgiveness promised by the Father. Also, this does not relieve us from any possible consequences of our sins. We are still subject to discipline by God as given in Hebrews 12:6. It’s the same way our human parents disciplined us for doing wrong, but the motive was to lovingly correct us, and not meant as abuse.

Thing is, now is not the time to ignore all that is happening in this world. We are seeing the pages of the Bible Prophecy being revealed to us daily. For believers, it’s actually an exciting time, even though the actions are troubling. We’re being shown God’s word is true and accurate, and the next major event on the prophecy timeline will be the Rapture.

We don’t know the day or hour but we do know the “beginnings” were about a decade ago. Also, before the evil antichrist can appear, the Holy Spirit will be removed, and all He indwells will be taken up to meet Jesus in the air. That’s 2 Thessalonians 2; 1 Thessalonians 4:13-17 and 1 Corinthians 15:51-53.

Today is a very good time to consider where you want to spend eternity; Heaven or hell. It’s totally your choice and the Father will accept either one you make.

This world is but an eyeblink compared to eternity which never ends. No matter what satan tries to tell you, all the treasures you may acquire here aren’t worth one second of our Heavenly Home. Jesus is never far away, and will take your call right now. Once you are truly a part of His flock, your forever will be absolutely wonderful. As given in John 14:1-3, Jesus Himself will prepare a place for you when you call out for Him to forgive you, and be your Savior.

Hoping to see you when we are lifted up to see Our Lord in the air soon. It could be any minute now.