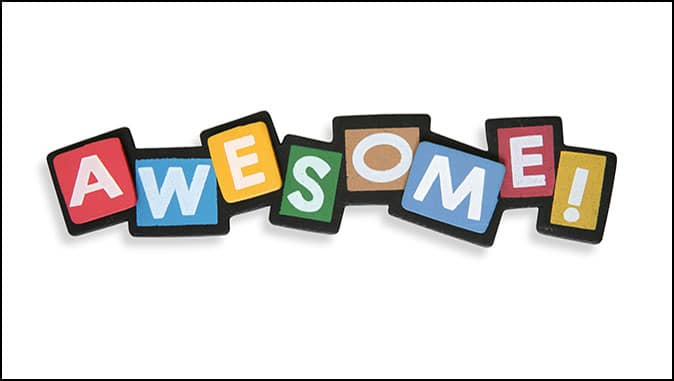 An Awesome God
By Dennis Huebshman

Looking back over all the messages I have been privileged to post, one is obviously missing. Whenever anyone comments on anything that I have written, I honestly say that all credit and accolades belong to our most awesome Heavenly Father. I ask, and He provides the material which I pass on. There were some messages that I tried to do without first seeking His guidance, and they all ended up unfinished and in the trash. He is perfect; I am not! (all emphasis mine)

Thinking about this, I fully realize we serve an “Awesome God”. Up until about 35 years ago, I was so secular, that if the Father had required my soul, right now I would be waiting for my time at the Great White Throne. Just as the rich man in the parable about the beggar Lazarus (Luke 16:19-31), I would be in total misery, with no hope for any relief for my eternal soul.

Not only did God allow me to call out to my Jesus to be my Savior, He opened doors for me to fulfill a dream my mother had when I was very young. She always wanted me to be a pastor, which just wasn’t in my plans back then. I am a firm believer in the power of “prayer warriors”, and right up to the time that she left this earth to be with Jesus, she was my number one advocate and encourager. She did not get to see her wish totally fulfilled prior to her passing, but she did see that I had called out to Jesus to be my Savior. It was a start.

Our Heavenly Father did not just create us, and then tell us we are totally on our own. He does give us free-will and the ability to choose to accept or reject Him. Through about 40 Holy Spirit inspired people, God has provided us with all the information we need to fulfill His will, and to receive the gift of eternal life in Heaven with Him. This “instruction manual” starts with the creation of the heavens and the earth, and includes critical information that runs all the way to the end of the Millennial Reign of Our Lord and Savior, Jesus the Christ. To show His word is true, the Bible is filled with prophecies, and many of them have already been fulfilled with 100% accuracy. This tells us that the remaining few will likewise be completed just as we were told they would be. The next major event on His prophetic calendar will be the removal of all true believers from this earth in “the twinkling of an eye”.

There are so-called man-made deities that the Father warned us about, that are designed to be totally in control of every aspect of their followers lives. There are so many rules and rituals that it’s impossible to know them all. None of their members have the assurance of an eternal life in paradise, and they can only hope they’ve done enough “deeds” to earn their place there. Several years ago, I spoke with a new convert to Islam, and he stated that he would get on his “prayer rug” numerous times a day calling out to his god, asking what more he could do. There is no such thing as a “personal relationship” with any of their gods.

Our Awesome God has provided everything required for His believers to know for certain that we are saved. He understood that humans could never offer the perfect sacrifice necessary to cover our sins. It can’t be bought or earned at any price we could possibly come up with.

Ephesians 2:8-9 speaks directly to this. “For by grace you have been saved thorough faith. And this is not of your own doing, it is the gift of God, (9) not a result of works so that no one may boast.”

John 3:16-17 tells us that God loves us so much, that He sent a most valuable part of Himself to this sin-filled world to provide our absolute pathway to be with Him forever. There is a critical stipulation given in John 3:18 that gives the only true condition of our Salvation. “Whoever believes in Him, is not condemned; but whoever does not believe is condemned already; because he has not believed in the name of the only Son of God.” This is also given to us in 1 John 5:12. Our choosing Jesus if voluntary, not forced.

Jesus desires a personal relationship with every one of His “sheep”. John 10:14-16; “I am the Good Shepherd. I know My own, and My own know Me; (15) just as the Father knows Me, and I know the Father; and I lay down My life for the sheep. (16) And I have other sheep that are not of this fold. I must bring them also, and they will listen to My voice. So, there will be one flock, one Shepherd.”

God promised that the Messiah (anointed One) would come to earth through the blood-line of King David. When we look at blood lines for Joseph and Mary, both can be traced back to David through his sons Solomon and Nathan, and none of them were perfect and sinless.

Matthew 1:1-16 is Solomon’s line, and it is believed this one leads to Joseph. Luke 3:23-38 is Nathan’s line, and is believed it is the blood line of Mary. Having been placed in Mary’s womb by the Holy Spirit, the blood of Jesus never mixed with either Joseph or Mary. Otherwise, His pure human blood would have been tainted with the “sin-nature” that has been present in all other humans from Adam and Eve, and will continue to the end of this earth’s existence. The “Christ”, also meaning the anointed One, had to have pure sinless blood, and to never have sinned during His lifetime on this earth. Otherwise, His sacrifice would have never been pure enough to satisfy the Father’s need for perfection.

God allowed animal sacrifice to atone for sin pre-calvary, but this was never a permanent solution. The sacrifices had to be done on a regular basis, and in a specified manner to be in the will of God. Hebrews 10:4 speaks of this; “For it is impossible for the blood of bulls and goats to take away sins.” Going to Hebrews 10:12, we read; “But when Christ had offered for all time a single sacrifice for sins, He sat down at the right hand of God.”

Only an Awesome Loving God would care for us so much that He goes out of His way to be patient and give us an opportunity to repent and call out to be saved. That’s 2 Peter 3:9, and Romans 10:9-13. Rich Mullins released a “praise song” in 1988 that is uplifting, and contains inspirational encouragement.

Our Heavenly Father has told us in His word what this world would be like just before Jesus calls all true believers up to meet Him in the air. This will be done to fulfill God’s promise to keep all the flock out of the tribulation/wrath that is rapidly approaching. Every sign is present today for the new world order to take over, and to put into place the evil wicked world leader. For anyone to think this will all go away, and we will return to “normal”, they are sadly mistaken.

Before satan’s protégé appears, the influence that is holding him back must be removed. (2 Thessalonians 2) That would be the Holy Spirit, and subsequently all who have asked Jesus to be their Savior who are indwelt by Him. If you haven’t called on Jesus to be your Savior and Redeemer, now would be a wonderful time to do so. The Rapture will be over in less than one second, and we’re not guaranteed tomorrow.

“Jesus is coming soon; morning, night or noon.” Once you have Jesus in your heart, you are ready to be with Him forever.