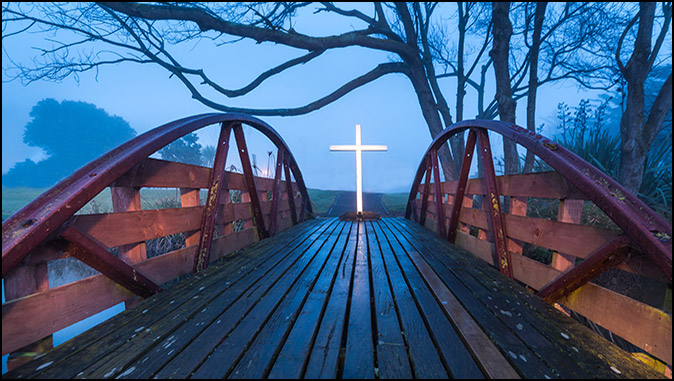 Across The Bridge
By Dennis Huebshman

For anyone to believe that they’ve lived a life good enough to get them into Heaven forever, Romans 3:10 sums it up best; “as it is written, none is righteous; no not one.” The only exception to this came to earth about 2000 years ago. Jesus, though fully God (John 10:30), became fully human to provide us something that no one else in the whole history or future of this world could ever do. He never once sinned while He was here, and His pure sinless blood sacrifice is the only one the Heavenly Father could ever accept. (ESV – all emphasis mine)

Hebrews 10:12-18 gives us a promise from the Holy Father; “But when Christ had offered for all time a single sacrifice for sins, He sat down at the right hand of God; (13) waiting from that time until His enemies should be made a footstool for His feet. (14) For by a single offering, He has perfected for all time those who are being sanctified, (15) and the Holy Spirit also bears witness to us; for after saying, (16) ‘This is the covenant that I will make with them after those days, declares the Lord; I will put my laws on their hearts and write them on their minds’; (17) then He adds, ‘I will remember their sins and their lawless deeds no more.’ (18) Where there is forgiveness of these, there is no longer any offering for sin.”

Up to Calvary, sacrifices were to be made continually every year, in submission to the Father’s requirement for a blood sacrifice. This was always meant to be temporary from the very beginning. Hebrews 10:3-4 states; “But in these sacrifices there is a reminder of sins every year. (4) For it is impossible for the blood of bulls and goats to take away sins.”

In Hebrews 10:9-10, Jesus is quoted; “then He added, ‘Behold, I have come to do your will’. He does away with the first (animal sacrifice), in order to establish the second. (10) And by that will, we have been sanctified through the offering of the body of Jesus Christ, once for all’.” Please note that all three members of the Holy Trinity are mentioned in the above Hebrews verses.

Sanctified, or sanctification, according to Miriam Webster is “to set apart to a sacred purpose, or to religious use; consecrate; to free from sin; purify.” According to Dictionary.com; “verb; to make Holy; set apart or secured; consecrate.” Only the Holy Trinity could totally accomplish this.

The Father knew from the very beginning what had to take place, and it happened completely in His schedule. In Psalm 103:8-12, David wrote; “The Lord is merciful and gracious, slow to anger (see 2 Peter 3:9), and abounding in steadfast love (as given in John 3:16). (9) He will not always chide, nor will He keep His anger forever. (10) He does not deal with us according to our sins, nor repay us according to our iniquities. (11) For as high as the heavens are above the earth, so great is His steadfast love towards those who fear Him; (12) as far as the east is from the west, so far does He remove our transgressions from us.”

Fearing God does not imply that we are to be terrified of Him, or constantly be in a petrified state. One definition that makes total sense is that we must first of all recognize God is loving, merciful and forgiving. He is Holy, just, and righteous; and knowing and understanding His character, we accept that His justice and holiness causes Him to judge all sin, and it will be with absolute fairness.

In this sense, fearing the Lord is to appreciate His character. If He had chosen to be a tyrannical dictator, He could have very well have done so. We should respect and love Him all the more for the infinite mercy He has shown each of us.

God does not lie as given in Numbers 23:19; Hebrews 6:18; and Titus 1:2. He understands human nature far beyond anything we can imagine, and He has declared that we are not saved by any works, but solely by the sacrifice given by our Savior on the Cross. (Ephesians 2:8-9)

He has also made it very clear, that all who reject Jesus as their Savior will ultimately be separated from Him forever.

All who truly receive and accept Jesus will be saved. See Romans 10:9-13 for the steps to Salvation. Also, God understands that we are human, and we will sin until we take our last breath on this earth. That is why He provided 1 John 1:8-9 as our path to forgiveness To say we have never sinned would say that God’s word is untrue. Romans 3:23 and Romans 6:23 lets us know that even if we are saved, we will still slip and sin until we get our new forever immortal imperishable bodies, and pure Jesus-like mindset.

That will take place after we have left this earth. Figuratively speaking, we will get “Across the Bridge” from this temporary life to be in our eternal Home forever, when Jesus calls us up to meet Him in the air.

Jim Reeves sang a Walter Scott song in the early 1960’s that makes a lot of good points, called “Across the Bridge”.

1.) I have lived life of sin, in this world I’m living in; I have done forbidden things I shouldn’t do. I asked a beggar along the way, if he could tell me where to stay; where I could find real happiness and love that’s true.

2.) Follow the footsteps of the King, till you hear the voices ring; they’ll be singing out the glory of the Lord. The River Jordan will be near; the sound of Trumpet you will hear; and you’ll behold the most precious place ever known to man.

For Jesus, He went back across the bridge after His resurrection. His Spirit was there the second His human body died. At that instant, the pure blood had been freely shed, and His final word; “It Is Finished!” declared there was a new straight and narrow path to Heaven. Satan was officially put on notice.

It doesn’t matter what you have done in the past, where you are from, the color of your skin, or any other human factors. If you will truly call out to the Savior, admit you are a sinner, ask His forgiveness and to come into your heart forever – you will be saved. His blood covers all who will receive and accept Him from that instant on.

To put your decision off or to believe false prophets that say there’s many ways to heaven without Jesus, would be a serious mistake you definitely don’t want to make. By all prophetic signs, we are at the doorstep of the Rapture, (1 Thessalonians 4:13-17; 1 Corinthians 15:51-53) and the shout and Trumpet blast could happen at any moment. Satan will try to convince you that there’s plenty of time. However, even he does not know the day or hour the Father has set to end this age and start the wrath/tribulation. He does know it’s getting very close, and that appears to be a reason for all the increased satanic activity worldwide.

Eternity with the Savior will be absolutely much more fulfilling than eternal torment in the lake of fire. It’s totally your choice to make, and no one can make it for you. As stated, God is patient and wants no one to be condemned as given in 2 Peter 3:9; but then there’s 2 Peter 3:10 when the time for avoiding the wrath is over.

As a personal note during this special time of the year, our wish for all is to be totally blessed, and have Jesus as your Savior, so that when we are taken up, we will have so many loved ones, old and new, to greet, right after we are able to rise from seeing Jesus in person. Personally, I wish to be able to kiss the feet that walked this earth on my behalf, and for all He has done to allow Brigett and I to share His word. It’s not for accolades for us, but to put Our Savior, Our Shepherd, Our Messiah, Our God on every heart that will listen!

May the Lord Bless You and Your Loved Ones Richly!