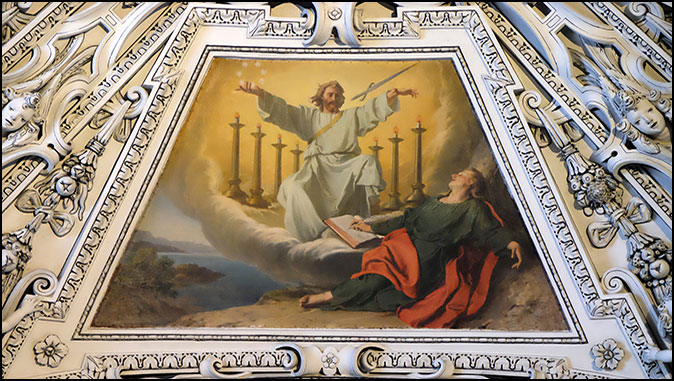 John was one of the original 12 apostles, and rather than use his name in his Gospel, he calls himself, “the disciple whom Jesus loved”. Therefore, it’s interesting that when he saw Jesus in His pure form, he stated in Revelation 1:17-18; “When I saw Him, I fell at His feet as though dead. But He laid His right hand on me saying, “Fear not; I am the First and the Last, (18) and the living One. I died and behold, I am alive forevermore, and I have the keys of death and hades.” (any emphasis mine)

In Matthew 17:1-8; Mark 9:2-8 and Luke 9:28-36, we read about the “transfiguration” of Jesus in the presence of Peter, James and John. Only Luke states they were “heavy with sleep” (v.32). Otherwise, they were not overcome. Quite a bit of time had passed from the transfiguration to the writing of Revelation, (approximately 60+ years) and John was much older and very close to going Home to be with Jesus.

As for how I believe I will respond when I first am able to see My Jesus in person; words from “I Can Only Imagine” come to mind.

“Surrounded by Your Glory; what will my heart feel? Will I dance for you, Jesus, or in awe of You be still?

Will I stand in your presence, or to my knees will I fall? Will I sing “Hallelujah”; or will I be able to speak at all?

(and then the final line) All I can ever do, is forever worship you; I Can Only Imagine.”

Just receiving my forever immortal body, and having the mindset of My savior, which will be immune to temptation and sin, will have to be totally overwhelming. Time will not be measured in what the Father gave us for this earth, and I can imagine it will take more than a few earthly hours to be able to rise up and hug My Savior with all my might

Jesus provided our most perfect “stimulus package” ever, and didn’t use any so-called “pandemic” to present it to us. Instead, He gave His very real life blood as our “perfect vaccine” that really does work as its supposed to. His precious blood reached all the way from the cross at Calvary to touch my heart and soul, and your heart and soul to take away all our sins. Jesus gave us Truth!

What is my obligation for such a valuable gift such as this? To simply follow the ABC’s of Salvation as given in Romans 10:9-13. A – admit I am a sinner, and yes, every living breathing human (except Jesus) that ever walked this earth have sinned as well. (Romans 3:23; Romans 6:23). B – believe that Jesus died for our sins, and His precious blood shed at Calvary is there to cleanse us from all unrighteousness, and that He really died and was raised up from His human death to conquer sin and death once and for all. Then C – Call on the name of the Lord Jesus, and we will be saved.

This applies to every human on this earth. There is no other price tag attached; no “works” that any of us can ever do to “earn” our Salvation. Our Savior’s gift at the cross was paid in full by the blood of the Son of the Living God; one third of the Holy Trinity. The Holy Spirit rounds out this Triune Godhead, and we’re promised that when we receive and accept the gift given by our Savior, the Holy Spirit will live within us as long as we’re on this evil planet.

Though we will be sinners as long as we’re in these human bodies, our Father has made provision for us to be forgiven when we do slip and sin. That is found in 1 John 1:8-10. Jesus Himself made it clear in Matthew 18:21-22 that our receiving forgiveness isn’t just a one-time thing. However, we need to turn away from habitual sin, and get closer to Him. As stated, He will not turn anyone away, but will not force anyone to accept Him either. He is our Creator, and wants us to have a true relationship with Him.

On that note, we must remember satan will do all he can to destroy our “stimulus package”, and lead us into eternal damnation if we allow it. He is the master of lies and deception, and just seeing all that’s happening in this world today, it’s obvious his plans are working. True believers are in the minority, and there’s an “in your face God” atmosphere that is growing. I’ve mentioned the “strong delusion” before, and I believe it’s already started to some degree. After the harpazo or Rapture, it will hit with full force.

To be “stimulated”, having Jesus as our Savior guarantees we won’t be here for the worst 7-year period of time this planet will have ever seen. Yes, there’s some persecution and tribulations now, but nowhere near the severity that’s coming.

Remember this phrase that bears repeating; “All who call on the name of the Lord, will be saved.” God is no respecter of persons, as stated numerous times in the Bible. Organized evangelical religion isn’t what saves us either. It’s what the condition of our heart and mindset are in that matters.

Jesus had the most problems with religions leaders, and they were the cause of His being hung on a cross. Little did they realize, they were a part of prophecy that was given centuries earlier. Just read Isaiah 53 to see that Jesus fit that prophecy, and others, perfectly. These were supposedly “educated scholars” that should have recognized Him as Messiah as given in the holy scrolls. Thing is, they had changed God’s word so much to suit their selfish needs, they couldn’t recognize genuine truth.

Unless those religious leaders repented before they died, they will be at the white throne judgment, and will join satan in the lake of fire. (Revelation 20:11-15) Jesus asked for their forgiveness, and for all who were a part of His crucifixion as well. Even so, they would have had to accept Him as their Savior, before they died, in order for all their sins to be forgiven. Yes, God would even forgive them for crucifying His Son, if they truly repented and asked Him to.

Right now, it is not too late, but tomorrow could be. The day, hour, minute, second is rapidly approaching as evidenced by all the end-time signs that are present.

Be sure to get your “stimulus package” by calling out to Jesus today. This is one package that will not run short in supply, and is available to everyone who will ask for it. The only “adverse” effects is you might just see clearly what the condition this world is in. Non-believers will only see us as pursuing folly as stated in 1 Corinthians 1:18.

Once a person takes their last breath on this earth, their forever is set. There will be no ability to repent and change your mind, and accept Jesus after that. Sadly, a lot of “church goers” have never really accepted Jesus, and are lost. Just attending every church service doesn’t make one a true believer. Call on Jesus; read the word of the Father; believe Jesus is the only way to Heaven, and talk to Him regularly. He wants you to be a part of His precious flock, but the choice is entirely up to you. He’s waiting for now, but His call for all true believers is imminent.

Shalom! Peace in the name of Jesus!

His Timing Is Perfect

His Timing Is Perfect By Dennis Huebshman There are people today, including myself, that wonder…

The Lord’s Prayer – and Others