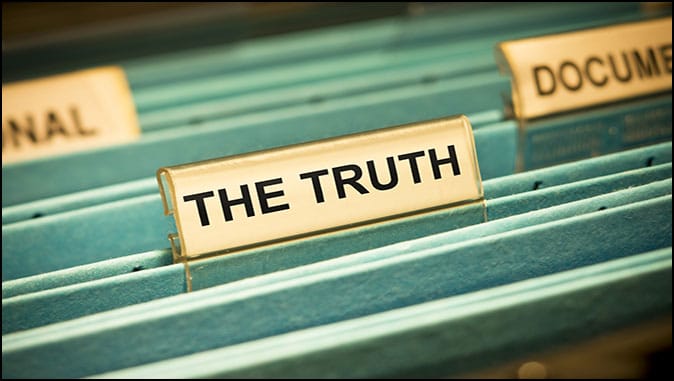 Whatever Happened to Truth?
By Mike Gendron

We are living in a time when many people have lost confidence in their ability to identify truth or to discern truth from lies. The pursuit of truth has been hijacked by a culture that esteems misguided opinions masquerading as facts more important than objective reality. People are witnessing how easily truth can be twisted, manipulated and suppressed by politicians, religious clerics, historians, scientists and the media. “Truth has perished and has been cut off from their mouth” (Jer. 7:28). Those without any discernment are trusting their favorite personalities to set the record straight rather than seeking a more trustworthy source for truth. Our postmodern world has declared there is no such thing as absolute truth because they say truth is relative. Much of society now believes that truth, like beauty, is in the subjective eye of the beholder.

When politicians, historians, scientists and the media misinform and mislead people by twisting and distorting the truth, their lies only produce temporal consequences. However, when religious clerics do the same thing, their lies have eternal consequences. We can be misled about a lot of things in this life and still survive, but if we are misled about how to be made right with God, we will pay for that mistake forever and ever. Religious clerics who deceive people about their eternal destiny are to be exposed as enemies of God and agents of the devil. There is only one Gospel that has the power to save those who are perishing (Gal. 1:6-9). Those who distort or pervert the Gospel of grace are propagating the most lethal and deadly lie anyone could ever speak. Those who twist the Word of God are doing so to their own destruction (2 Pet. 3:16). God will destroy those who speak falsehood because He abhors the man of deceit (Psalm 5:6).

There is an important distinction between the wicked religious institutions that deceive people and the misguided souls who are casualties of their fatal lies. As Christians, we are to love the precious souls who are being deceived but hate the evil institutions that deceive them. Some may ask if this kind of hatred is justified. According to God’s inspired Word, it is. We are to hate every false way and despise falsehood (Psalm 119:128,163). It is for this reason I hate the apostate Roman Catholic religion that deceives its people with a false and fatal gospel. At the same time, I love Catholics with enough compassion to spend my life trying to reach them with the true Gospel. It is not love if we allow them to march proudly towards hell’s gate without warning them with the truth from God’s Word. Those who have been deceived will never know it until they are lovingly confronted with the truth. We must use the truth of Scripture to expose and destroy the lies of the devil. May our passion for the truth cause us to have a greater compassion for those who are perishing! Likewise, may our hatred for fatal lies cause us to contend more earnestly for the true faith of the apostles (Jude 3).

Truth is the only thing I know that can both unite and divide people. Jesus, who is the personification of truth, came to divide believers against unbelievers, man against his father, and a daughter against her mother (Mat. 10:34-35). On the other hand, truth unites those who have been sanctified by the truth (John 17:17-21). God brought them forth and set them free by His Word of truth (James 1:18; John 8:32). Truth-bearers are often publicly shamed, labeled as intolerant, or cancelled by truth-rejectors. Many truth-rejectors have exchanged the truth of God for a lie. Others are deprived of the truth and understand nothing because they have been blinded to the light of the Gospel (2 Cor. 4:4; 1 Tim. 6:4-5). They are always learning but never able to come to the knowledge of the truth (2 Tim. 3:7).

Truth Is Definitely Worth Pursuing

Every person’s eternal destiny is confirmed by the universal and divinely authoritative truth of Scripture. We know the most trustworthy authority for discerning truth from error is the Lord Jesus Christ, who is the personification of truth, and His Word, which is the truth (John 14:6; 17:3). Christians know that it is impossible for God to lie (Heb. 6:18). We know that truth is always objective and absolute. It is never subjective or relative, and it is not subjected to, or dependent upon, anything else. We also know that truth is immutable, just as Jesus is. He is the same yesterday, today, and forever (Heb. 13:8). Truth is universal and there is no place where truth is not true. As truth-bearers, all Christians have been given an awesome responsibility and a divine privilege. We are to guard, proclaim, uphold and defend the truth against any and all opposition and to expose the lies that undermine the truth of God’s Word (1 Tim. 6:20-21).

Reversing the Reformation By Jonathan C. Brentner In my previous post, No One Can Cancel…

An Eye for Evidence

An Eye for Evidence By Tim Wildmon I have a friend, Frank Turek, who wrote…