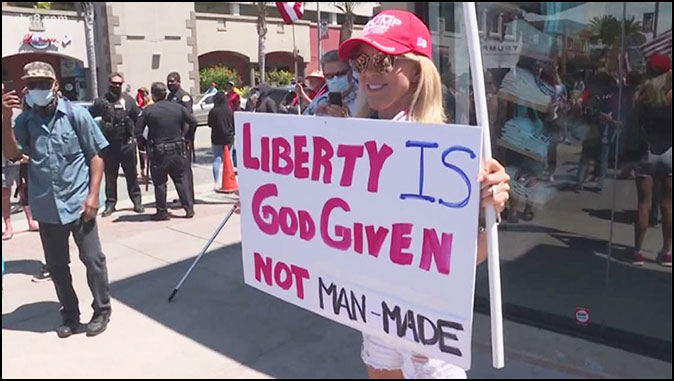 Judge a Tree by Its Fruit

It has been said that “the road to hell is paved with good intentions.” Some of the most egregious purveyors of authoritarian overreach have proven the truth of this adage during the current coronavirus crisis by citing their altruistic intentions. Adding insult to injury, for many of them, the tendency to marginalize Christianity and defend abortion has been absolute.

Jeremiah warned that the human heart is more deceptive than all else (Jeremiah 17:9). But Christians grounded in the Word and blessed with discernment should not be deceived — even by wolves in sheep’s clothing.

Instead, we should look at a person’s fruit. Does an official’s actions erode reliance on and faith in God? Do they honor constitutional restraints on their own power? Or, do they take advantage of every opportunity to grow the scope and intrusiveness of government — even at the cost of religious liberty?

Previous generations of Christians fought and bled to lay claim to the religious freedom granted by our Creator and enshrined in the American Constitution. They considered it a sacred duty to exercise that freedom and then pass it on unencumbered to the next generation. Religious liberty is under attack as never before — and is being relinquished by many who ought to know better.

Benjamin Franklin said, “Those who would give up essential liberty, to purchase a little temporary safety, deserve neither liberty nor safety.” Ordered by the high priest to stop teaching in Jesus’ name, Peter and the apostles responded, “We must obey God rather than men” (Acts 5:27-29). Flogged as a warning, “they went on their way rejoicing that they had been considered worthy to suffer shame for His name” (Acts 5:40-41).

The signs of the times indicate that we are witnessing the fulfillment of Romans 1:18-32 and 2 Timothy 3:1-8 and 4:3-4. Men and women who purport to represent our society show growing animosity toward sound doctrine of the Christian faith. Their hatred for those who love the Lord’s appearing will only increase as the Day of the Lord draws near.

We have been posted on the watchtowers of our society. While we still have a voice, let us sound the alarm. When we run afoul of secular despots, we will be warned and may even be persecuted. But some who are groping in darkness will heed our call, repent and turn to Him who will set them free indeed.

11) Do this, knowing the time, that it is already the hour for you to awaken from sleep; for now salvation is nearer to us than when we believed.

12) The night is almost gone, and the day is near. Therefore let us lay aside the deeds of darkness and put on the armor of light.

13) Let us behave properly as in the day, not in carousing and drunkenness, not in sexual promiscuity and sensuality, not in strife and jealousy.

14) But put on the Lord Jesus Christ, and make no provision for the flesh in regard to its lusts.

The Church: Navigating the Difficult Waters of Sexuality

The Church: Navigating the Difficult Waters of Sexuality By Rebecca Davis “This topic of sexuality…