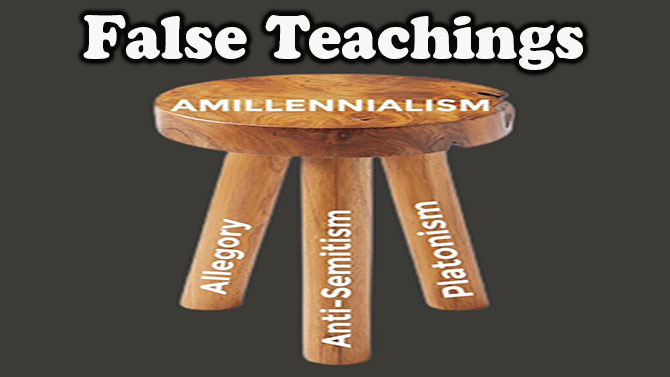 The Unbiblical Basis of Amillennialism
By Jonathan C. Brentner

Throughout the Dark Ages and Reformation, Amillennialism remained the mainstay of the church because of three critical factors.

I know my title sounds a bit theological. Why even bring up the topic of amillennialism?

I do so because a great many pastors today subscribe to some form of this errant teaching that denies the prophesied restoration of a kingdom for Israel as well as the biblical promise of Jesus’ millennial reign before the eternal state.

Amillennialism dominated the church during the dark ages and persisted long after the Reformation. The reason for this rests with three factors that fueled this teaching for well over a thousand years and remain in place today, at least to some degree.

It’s vital to our faith that we understand the errant foundation of amillennialism so we can recognize the error and defend the integrity of Scripture when others seek to lead us astray.

Apart from the allegorization of Scripture, amillennialism would not exist. Rather than interpret prophecy according to the intent of biblical author, those who apply this method to prophecy retrofit biblical texts with meanings that do not match the words nor the intent of the authors.

The practice of allegorizing biblical texts began with Philo, an Alexandrian Jew who lived during the time of Christ. He admired Greek philosophy and used allegory as a means to make the Old Testament agreeable with Greek.

In the second century AD, Clement and Origen adopted Philo’s allegorical approach to God’s word. Clement (AD 150-215) “embraced Greek philosophy and maintained that Scripture must be understood allegorically so as not to contradict it.” Origen (AD 185-254) used allegory to make biblical prophecy comply with Plato’s dualism, which stated that only the spiritual, immaterial realm was good.

The church Council of Nicea, which met in in AD 325, condemned the teachings of Origen and affirmed the place of the book of Revelation in the New Testament in direct contradiction to Origen’s rejection of Jesus’ thousand-year reign as described in Revelation 20:1-10.

At the beginning of the fifth century AD, a much more capable theologian named Augustine utilized Origen’s allegorical approach to biblical prophecy and steered the church away from its premillennial footing in favor of amillennialism. During the dark ages, theologians extended Augustine’s allegorization of prophetic texts to passages in the New Testament, which led to the contamination of the doctrine of justification by faith.

We see this same pattern happening today; the practice of allegorizing Bible prophecy invariably leads, over time, to an undermining of the purity of the Gospel and an acceptance of immoral cultural norms for behavior. Allegory never remains confined to biblical passages dealing with prophecy; it always spreads. Always.

Notice the words of the apostle Peter in 2 Peter 1:20-21, “…knowing this first of all, that no prophecy of Scripture comes from someone’s own interpretation. For no prophecy was ever produced by the will of man, but men spoke from God as they were carried along by the Holy Spirit.” Just as the prophets of old did not speak from their own understanding, in the same way we must not apply our own private “interpretations” to what they wrote; we must let the words speak for themselves.

The Greek word for “spoke” in verse 21 is laleo. According to Trench in in his book Synonyms of the New Testament, the “prominent notion” of this verb is “the fact of uttering articulated speech…it is the words uttered, and that these correspond to reasonable thoughts…” Biblical prophets, in both the Old and New Testament, expressed truths in words as God moved them through the Holy Spirit (see also 2 Tim. 3:16; Proverbs 2:6).

Yes, the biblical authors used symbolism and figures of speech, but they did so in a way that was clear from a normal understanding of the text. We must not veer from what the authors of biblical prophecy intended to communicate to us at the time they wrote. We are not free to interpret Scripture in a way that does not align with the words on the page such as many pastors do today, especially with the book of Revelation (see my previous post on this matter).

The practice of allegorizing Scripture began with the purpose of making Greek philosophy compatible with the Old Testament. Theologians such as Origen employed it to diminish the physical blessings of the millennium in order to comply with the teachings of Plato, who taught that all matter was evil.

Although Augustine claimed to disagree with Plato on most issues, he nevertheless incorporated the philosopher’s unbiblical scheme of reality into his theology. He stated that the millennium “would not be objectionable” to him if somehow “the nature of the millennial kingdom was a ‘spiritual one’ rather than a physical one.” He objected to the thoughts of “carnal banquets,” which he visualized as a part of such a kingdom.

Augustine’s basis for rejecting the premillennialism that dominated the first three centuries of the church came from Plato, not the Bible.

Although the Reformers firmly rejected the use of allegory to interpret Scripture, they retained it in regard to biblical prophecy and thus continued the amillennialism of Dark ages. A key reason for this was the enduring influence of Plato upon Reformers such as Calvin and Luther.

E. J. Hutchinson, in his article Calvin’s Plato, cited several of John Calvin’s references to Plato. He summarized his findings with these words, “In conclusion, Calvin makes regular use of Plato’s philosophy both in philosophical and in theological contexts. Far from being mere window-dressing, he often finds in Plato an argumentative ally against his contemporary opponents. Plato was, in other words, a living source of truth for Calvin.”

Martin Luther, a former monk who once belonged to the Augustinian Order, also did not distance himself from Augustine’s Platonism in regard to future things. Though not as evident as with John Calvin, Luther nevertheless maintained a high regard for Plato.

A key motivating force for the enduring strength of amillennialism since the time of Augustine down to the current time is the organized church’s long-held affinity for Plato’s dualism.

The Bible absolutely refutes the dualism of Plato. Throughout Genesis 1, God made it abundantly clear that His creation of the material world was “good.”

Paul wrote these words in 1 Timothy 6:17, “As for the rich in this present age, charge them not to be haughty, nor to set their hopes on the uncertainty of riches, but on God, who richly provides us with everything to enjoy.” The Lord intends for us to enjoy the good gifts He gives to us, which certainly includes material benefits and earthly pleasures. He blesses us both spiritually and physically in this life, which is but a foretaste of the kindness God will show to us throughout eternity (Eph. 2:7).

Consider the words of Psalm 16:11, “You make known to me the path of life; / in your presence there is fullness of joy; / at your right hand are pleasures forevermore.” Even as I typed the words of this verse, I felt the platonic influence on the church suggesting to me that the meaning of “pleasures” is not really what it says. However, the Bible says that the redeemed of the Lord can look forward to a wondrous eternity complete with many physical pleasures.

If the Lord says we celebrate at the marriage supper of the lamb, why would anyone consider that carnal or sinful; that’s ridiculous.

I encountered anti-Semitism in a prophecy class that I taught a few years ago. The man who often opposed my teaching held to a popular variation of amillennialism called Preterism, which teaches that Jesus returned to earth in AD 70 and fulfilled most, if not all, of future prophecy in the Bible. It was not until the end of the class that I discovered his hatred of the Jewish people lay at the root of his false beliefs.

Anti-Semitism was a factor in Augustine’s amillennialism and it also helps explain why the Reformers did not extend their literal approach of Scripture to passages that teach the future restoration of a kingdom for Israel. Both Calvin and Luther retained the anti-Semitism that dominated the church during the Dark Ages, which in turn helped keep amillennialism in place during and after the Reformation.

With the return of amillennialism to many evangelical churches during the past twenty-five years, anti-Semitism has also resurfaced as seen in the increasingly popularity of Christian Palestinianism as well as in the current anti-Zionism movements. The further that the church drifts away from premillennialism, the more it becomes susceptible to an unbiblical view of Israel’s claim to the Promised Land.

Let me be clear; I am not saying that those who now teach that the current nation of Israel is just an anomaly of history are anti-Semitic, not at all.

However, such racism has historically been one of the three foundations of amillennialism and the resurgence of this teaching explains, at least in part, the rapid increase of animosity toward Israel and the Jewish people, even within churches that claim to believe the Bible.

The Biblical Response: The Land Belongs to Israel

The Promised Land belongs to Israel.

Psalm 105:8-11 tells us that God’s covenant with the Patriarchs regarding the Land is an “everlasting covenant.” Although Israel’s enjoyment of the land has always been conditional upon her obedience, the Lord unconditionally promised that the Land would always belong to them. We have not yet reached the end of “everlasting;” the covenant of the Land thus remains in effect.

Apart from retrofitting the Old Testament prophets under the veil of allegory, one cannot read the words of Isaiah, Jeremiah, Ezekiel, and Zechariah without recognizing the Lord’s intention to someday restore a glorious kingdom to Israel in the future. If the words of Scripture mean what they say, and they do, God will keep all His promises to the descendants of Jacob.

Any hatred for a particular race or group of people is evil; it’s something that God hates. Anti-Semitism in the established church during the Dark Ages, fueled by Augustine’s amillennialism, led to centuries of murderous hatred toward the Jewish people.

Amillennialism came back to life under Augustine and flourished during the Dark Ages because he popularized the allegorization of Scripture in order to align biblical prophecy with the teachings of Plato and his hatred of the Jewish people.

These same three factors empowered amillennialism throughout the dark ages, sustained it and through the Reformation, and to varying degrees contribute to its sustainability and growing popularity in many churches today.

Amillennialism has produced disastrous fruits throughout the history of the church and continues to undermine other basic teachings of Scripture in places where it has been in effect for many years.

Commenting on the durability of amillennialism for well over a thousand years after the time of Augustine, Dr. Andy Woods aptly asks, “Should the Dark Ages be the standard of correct doctrine?” Indeed, it should not.

15 Satanic Lies To Keep You From God’s Word

15 Satanic Lies To Keep You From God’s Word By Dr. Joe McKeever "He [the…

How Can We Be Sure?

How Can We Be Sure? By Chuck Missler What is truth? That was the rhetorical…

Back to Biblical Basics – Part 2

Back to Biblical Basics - Part 2 By T. A. McMahon The objective of this…

Back to Biblical Basics – Part 1

Back to Biblical Basics - Part 1 By T. A. McMahon Biblical basics: why are…

Faith and Science – Not Mutually Exclusive