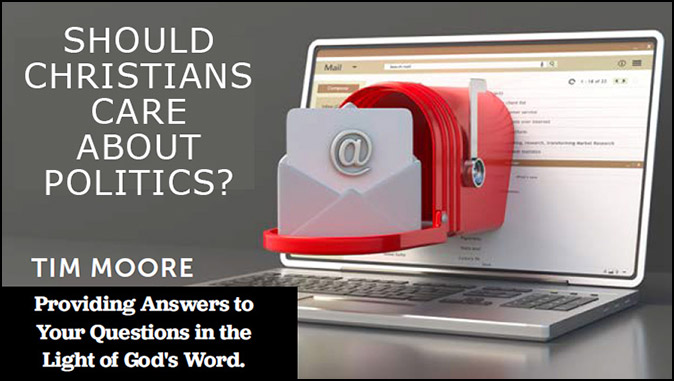 Should Christians Care About Politics?
By Tim Moore

Question: Why should we care about the worldly realm of politics if Jesus is coming again soon?

Answer: This is a good question because it goes to the heart of our role in the world as followers of Jesus Christ. Jesus told us to be “in the world, but not of the world,” and the political realm seems to reek of worldliness. You might say it is a swamp.

Having served in a legislature at the state level, I can report that Charles Dickens’ description in “A Tale of Two Cities” applies to the political realm. As in war, you can witness both the altruistic self-sacrifice and the utter depravity of man.

Nevertheless, we cannot relegate this sphere of human endeavor to Satan and his minions. The repercussions of decisions made and policies enacted in the political realm impact every person within a jurisdiction. And so, if we are to be salt and light in this darkening world, we must stay engaged and wield influence in this arena. Even as I say that, our goal is not to be a mere voting block or interest group, but to act as conduits of the Holy Spirit wherever He leads us to serve.

It is obvious that Bible prophecy impacts the political realm with forthtelling and foretelling. The ancient prophets often directed their charge to the king in power. Samuel called out and then rejected Saul, Nathan called out David, Jonah preached to Nineveh and the king was led to repent. In the New Testament, John the Baptist called out Herod the Tetrarch, speaking truth to power despite the risk to his own life.

Twenty years before he became the Dutch prime minister at the turn of the last century, Abraham Kuyper said, “There’s not a square inch in the whole domain of human existence over which Christ, who is Lord over all, does not exclaim, ‘Mine’!” If we believe that to be so, if we believe that the Holy Spirit indwells every believer and empowers the Church so that even “the gates of Hell shall not prevail against it” (Matthew 16:18, KJV), then our course is clear.

Although final fulfillment of the promises of God awaits the return of our Savior-King, we must endeavor to “make His blessings flow, far as the curse is found” (Isaac Watts, “Joy to the World,” 1719).

Worldview: The Lens We Look Through

Worldview: The Lens We Look Through By Tim Moore Our September/October 2022 edition of the…

Proving The Bible Is The Word Of God

Proving The Bible Is The Word Of God By Jack Kelley “Above all, you must…

Refuting the Scoffers By Jonathan C. Brentner Once you say that you believe in the…