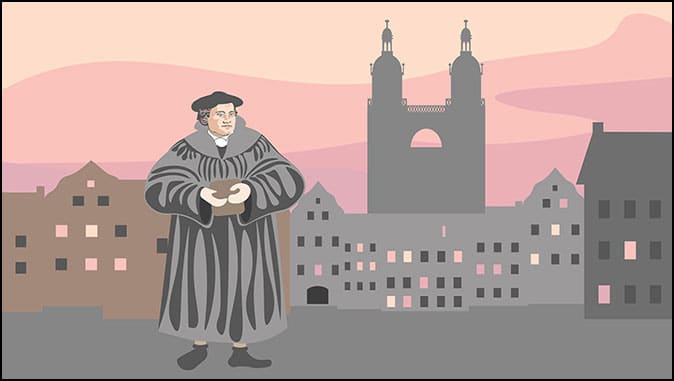 Remembering the Reformation
By Mike Gendron

This month we celebrate the 504th anniversary of the historic Reformation and all it accomplished! Our sovereign Lord began setting many captives free from the bondage of religious deception with the truth of His Word. It was the Word of God preached by men of God, empowered by the Spirit of God, that produced children of God, all for the glory of God.

Why Was the Reformation Necessary?

As the Reformers were abiding in God’s Word, they realized the Roman Catholic Church was under divine condemnation for preaching a distorted Gospel (Galatians 1:6-9). Catholicism was (and still is) distorting God’s Gospel of grace alone, through faith alone, in Christ alone. They distorted the Gospel by adding requirements for salvation including sacraments, good works, keeping the law, purgatory and indulgences. This corruption of the Gospel continues to lead Catholics down the wide road to destruction (Mat. 7:13). As God opened the eyes of the Reformers to see the light of the Gospel and the glory of Christ, they began proclaiming it and calling Catholics to repentance.

Rome’s corruption of the Gospel included using its heretical priesthood to continue on an altar Christ’s finished work of redemption on a cross. This was an outright rejection of the Lord’s victory cry on the cross, “It is finished” (John 19:30). The Reformers knew from Scripture that Jesus died once, for all sin, for all time and there are no more offerings for sin (Hebrews 10:12, 14, 18). Since the altar was no longer needed, the Reformers replaced it with a pulpit and the Word of God became the central focus of worship.

The Reformation was also necessary because the Catholic Church had drifted into outright apostasy. It had departed from the faith of the apostles to follow doctrines of demons that included forbidding marriage to its clergy (1 Tim. 4:1-3). Catholicism also embraced the first lie of Satan in the garden when the serpent said to Eve, “You surely will not die” if you break God’s command. This demonic doctrine continues with the Catholic teaching of “venial” sins, which declares such sins do not cause death, only temporal punishment in purgatory. Catholics need to know that all sins are mortal and the punishment is death (Rom. 6:23). The Catholic Church’s apostasy was officially and dogmatically documented at the Council of Trent, with over 100 anathemas that condemn Christians.

What Did the Reformation Accomplish?

The Reformers reestablished the Word of God as the supreme authority for faith. They used the words Sola Scriptura (Scripture Alone) to declare the Bible is sufficient and the ultimate authority over popes, traditions, and church councils (2 Tim. 3:15-16). As the inspired Word of God, Scripture must be used to test and correct all other authorities.

The Reformers also reestablished the Lord Jesus Christ as the only Head of His Church, which He purchased with His own blood (Eph. 1:22, Acts 20:28). The Reformers rejected the pope as the head of the church. In fact, Martin Luther declared, “We are of the conviction that the papacy is the seat of the true and real Antichrist. I declare that I owe the pope no other obedience than that of Antichrist.”

The Reformers also made the Bible available to the people in their own language. They soon discovered they could be pulsaved by reading the Bible unaided by priests and sacraments. The truth was setting them free from religious bondage. This caused the pope to put a stop to this mass exodus by once again putting the Bible on their list of forbidden books.

How Can We Remember the Reformation?

As we remember the Reformation this year, let us also remember the 1.3 billion Catholics who are perishing with a misplaced faith. We need to encourage them to do what the apostle Paul did for his salvation (Phil 3:3-9). They need to exchange their apostate religion for a saving relationship with the Lord Jesus Christ alone. Please know that we have many resources to help you evangelize those who are perishing.

Worldview: The Lens We Look Through

Worldview: The Lens We Look Through By Tim Moore Our September/October 2022 edition of the…