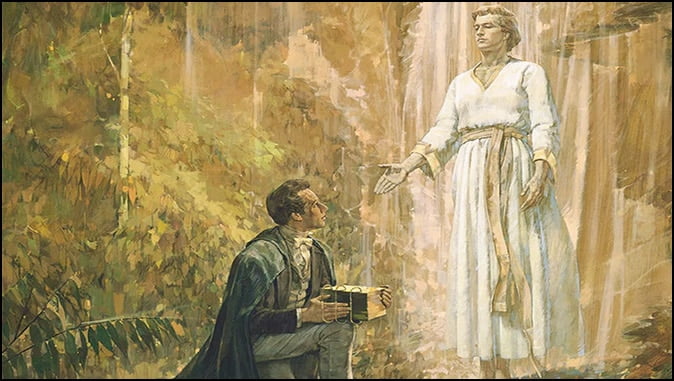 Joseph Smith claimed that the golden plates the angel Moroni had led him to discover, along with the Urim and Thummin stones used to translate the Egyptian hieroglyphics inscribed on the golden plates, were the very words written by a man named Mormon who was a descendent of a Jewish exilic pilgrim to the New World named Lehi. Mormon supposedly wrote:

“I am Mormon and a pure descendant of Lehi…and behold I am called Mormon, being called after the land of Mormon…behold I am a disciple of Jesus Christ, the Son of God. I have been called of him to declare his word among his people, that they might have everlasting life.”

Smith and his “heavenly helper” Oliver Cowdery, a former school teacher, proceeded to “translate” the Book of Mormon and finally published it in March of 1830. Besides the fact that Smith’s origin story was outrageous in the extreme and the character named Lehi totally unsubstantiated by the Holy Bible, almost immediately after the Book of Mormon had been published charges of plagiarism had been leveled against Smith. He was accused of stealing his ideas from a novel written a few years earlier by a minister named Solomon Spaulding. Though the Spaulding manuscript was eventually recovered in the Library at Oberlin College in Oberlin, Ohio, and similarities found were insufficient to warrant the charge of plagiarism, cults expert James H. Snowdon studied both documents and notes that Joseph Smith had indeed taken large portions of Spaulding’s novel when concocting the Book of Mormon.

Smith also added modern-day references to technologies that just did not exist in biblical times, such as the steel Laban used to make a sword (I Nephi 4:9) and a compass (Acts 28:13). Such a blatant forgery has led theologian Robert F. Boyd to conclude: “The Book of Mormon has utterly failed to make any valuable contribution to the cause of the true religion. It is difficult to escape the conclusion that the book is a cunningly devised fable.”

Smith’s assertion that he needed translation stones in order to translate the Book of Mormon proved a crafty cover for the fact that he possessed no knowledge of either the Hebrew or Egyptian languages, though that lack of knowledge never stopped him from claiming this or that word were Hebrew words, leading one cults expert to comment, “Prophet Smith seems to have had a fancy for inventing learned etymologies which were for the most part utterly fictitious.”

For example, when the Mormons had to resettle yet again, this time in Illinois, Smith bought the little town of Commerce and renamed in Nauvoo, which he incorrectly indicated was the Hebrew word for “beautiful place.” Even the word “Mormon,” Smith asserted, derived from the Egyptian word “mon” for “good,” added to the English word “more,” together became “Mormon,” or “more good” (though in the Greek “Mormon” is actually the word for “baboon”!).

Besides the Book of Mormon, Joseph Smith would later go on to pen the books The Pearl of Great Price and Doctrines and Covenants (D&C), as well as releasing his own version of the Bible because as the Mormon “Articles of Faith” claims, “We believe the Bible to be the word of God as far as it is translated correctly,” thereby supposedly restoring the “real gospel” of Jesus Christ. Smith also ran across an original Egyptian papyrus which he “translated” into the supposedly lost Book of Abraham. Reputable Egyptologists much later in 1967 properly translated the rediscovered papyrus and exposed both Smith’s translation as a fabrication and claim to be able to read ancient Egyptian as a total fraud.

Long after Joseph Smith had died and others took up his leadership mantle, such as Brigham Young, the leading apostles of the LDS Church continued to claim new revelations and make over 3,000 revisions to Joseph Smith’s writings. This shady behavior led famed theologian Walter Martin to exclaim in exasperation:

Present day Mormon doctrine, so complex and bizarre, evolved (or mutated) from basic Christian principles during its first fifty years because of the declarations of its “living prophets.” These declarations were at odds with each other with sufficient frequency to cause confusion among the church’s membership, but most Mormons’ faith remained intact nonetheless.

Martin went on to describe what has been “woven into the crazy quilt of Mormon theology are distinctive doctrines which have been introduced, taught, and afterward discarded and denied.” Such discarded doctrinal teachings from LDS leaders include the Adam-God doctrine which teaches that Adam returned to the earth to become the literal father of Jesus, and the Blood Atonement doctrine which makes the heretical claim that Jesus Christ’s blood only atoned for some sins so that a person needed to literally be executed in order to atone for the remainder of their sins.

Even the doctrine of eternal punishment espoused in the Book of Mormon has over subsequent revelations endorsed what cult historians have described as “a theology of nearly universal salvation.” If Mormons see the need to continue to rewrite or discard revelations supposedly revealed by the very mouth-piece of God, then they would be engaging in actual heresy against their own Mormon religion, not just traditional Christianity.

It takes little effort to disprove Joseph Smith’s claim to being a divinely called prophet of God. First, Smith fails Moses’ test of a false prophet due to his many failed prophecies, and his own ungodly and immoral character would cause even the most ardent hedonist to blush.

Second, the three witnesses to the quintessential event underlying all of the LDS religion — the translation of the golden plates into the Book of Mormon — were even denounced by their own fellow Mormons.

And, third, the Mormon scriptures have long been proven to be plagiarized frauds.

By these three arguments alone, the Mormon believer should begin to express serious doubts as to the truth of their religion. Any of these arguments should, as Bjornstad advises, stop the lost Mormon “from walking blindly down the steps leading away from God.”

Failing in this, though, Christians may proceed with a plethora of other topics available that fairly easily disprove Smith’s claims. These topics include challenging that all Christians churches are abominations to God, or the need for a restored Old Testament priesthood, or the unsubstantiated claim that God is merely an exalted man, or that Jesus was begotten as the spirit brother of Lucifer, or that humans preexisted and will one day attain godhood over their own planets, or the unbiblical requirements of a works-based salvation, or even Mormonism’s near-universalistic teaching of an afterlife made up of three kingdoms of glory (celestial, terrestrial, telestial). By using any of these arguments against the validity of Mormonism as an authentic expression of Christianity, the religious counterfeit who is Joseph Smith is unmasked as the fraud that he was.

Evangelical Christians must remember, though, to reach out to Smith’s followers in love and armed with the sword of the Word and these arguments against Mormonism being a valid expression of Christianity. For, if they do not, souls will be lost to eternal separation from God in a place of torment.