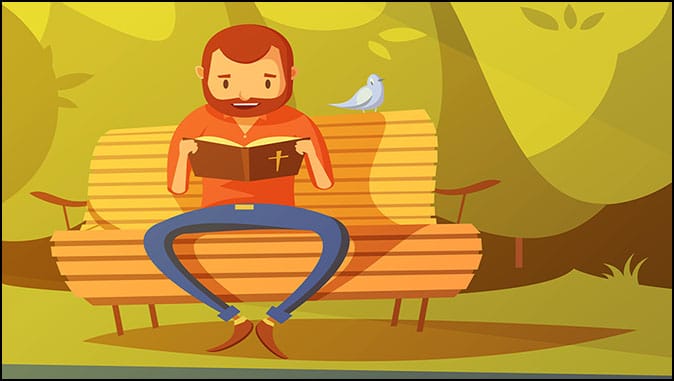 Why Prayers For Healing Fail – Part 3
By Jack Kelley

In our series titled, What Does the Bible Say About Healing, we’ve been looking at reasons why prayers for healing fail. Today we continue with Part 3. Please don’t look at any one of these reasons as being necessarily applicable to you. Such a conclusion would be premature. Rather, you should see them as a set of diagnostic tools. A way to check your spiritual health, if you will, to see if any of them apply so you can take the appropriate action.

In the NIV translation, the New Testament contains 82 references to “demon” or “demon possessed” and 8 more for “evil spirit”. The King James does not distinguish between “the devil” and “a demon” using only the word “devil” to describe Satan and all of his horde as well. But it’s clear that Satan, not being omni-present, could not perform all of his evil work alone but needs a vast army to assist him.

Most of us will never receive his personal attention, but that doesn’t make us immune to his schemes. His associates are well trained and vigilant, looking for any opportunity to help advance his cause.

Compare them to criminals in the physical world who know what they’re doing is wrong, but they do it anyway thinking they won’t get caught. When they see an open window or a flimsy lock they see a chance and in they go. It’s up to the police to catch them.

Demons operate the same way in the spiritual world, only there the “open window” is behavioral. Paul showed us an example of this in Ephes 4:26-27 when he said, “In your anger do not sin: Do not let the sun go down while you are still angry, and do not give the devil a foothold.”

Anger that’s not resolved by sundown that same day is an open window through which a demon can crawl and establish a foothold in our mind. Unfortunately, there are no demon police to catch him and carry him away. Once he’s in it’s up to us to get him out.

Other behaviors besides unresolved anger that can leave us with open windows include all kinds of addictions, habitual sexual sin including pornography, and other flagrant sin.

Jesus had some advice on this subject for those who have gotten rid of a demon. “When an impure spirit comes out of a person, it goes through arid places seeking rest and does not find it. Then it says, ‘I will return to the house I left.’ When it arrives, it finds the house swept clean and put in order. Then it goes and takes seven other spirits more wicked than itself, and they go in and live there. And the final condition of that person is worse than the first.” (Luke 11:24-26)

Leaving a demon’s habitation empty is like hanging out a welcome sign. It must be occupied by something else. One of the reasons AA is so effective is that it replaces the spirit of alcoholism with the Spirit of God. Every recovering addict should receive this advice and take it to heart to avoid reacquiring the addiction.

And Paul said we can demolish the stronghold a demon has built in us with divine weapons we’ve been given as believers.

“For though we live in the world, we do not wage war as the world does. The weapons we fight with are not the weapons of the world. On the contrary, they have divine power to demolish strongholds. We demolish arguments and every pretension that sets itself up against the knowledge of God, and we take captive every thought to make it obedient to Christ.” (2 Cor. 10:3-5)

Demons want us to believe false doctrine. Once they’re in our mind they begin feeding it to us to cause us to doubt the promises of God, just like the Serpent did to Adam and Eve. These promises include the fact that we can be healed. If the demon can cause us to doubt that, he can hinder our prayers for healing.

When we know what the Bible really says we can dispute the demon, tearing down his arguments, taking the thoughts he feeds us captive to make them obedient to Christ. In the process we demolish his stronghold and force him to leave. James said, “Come near to God and He will come near to you. Resist the devil and he will flee from you.” (James 4:7)

Remember, these demons know their Bible too, so you can’t just make this up as you go. You have to know what you’re talking about. This is exactly the way Jesus defeated Satan in the wilderness (Matt. 4:1-11) and it’s the way you can defeat the demon you’re fighting, too.

Failing To Steward The Natural

For the most part people ignore their bodies, taking them for granted and acting like they’ll last forever. It’s commonly known that much of what we eat and drink is not what our bodies really need and a lot of it isn’t even good for us. But we go blissfully on not paying any attention to what we ingest, as long as it tastes good, and most of us get away with it.

But there comes a time when some of us get a warning that all is not well. It could be mild or it could be serious, but for most, a couple trips to the doctor and a hand full of drugs with a warning that we should start watching our diet usually puts us back on track, at least for a while. We quickly forget the doctor’s dietary advice, maybe even forget to take the medicine, and go on as if nothing happened.

This is the time when we should get serious about “stewarding the natural.” Signs like this tell us our body needs attention. If we give it what it needs now, better food, reduced weight, no more smoking or drinking, reasonable exercise to work off the stress, faith building prayer and Bible study, we can avoid big problems later. All these things will result in better health, But we don’t apply them, and because we don’t we’re not prepared mentally, physically or spiritually later.

I know a man who actually got into a huge argument over a scratched fender while he was still in the hospital after suffering a major heart attack, and made his wife, who was responsible, leave the room. The monitors attached to him showed the effect of his anger but he paid no attention. Another acquaintance stopped by a fast food chain on the way back from a trip to the emergency room for a burger and fries. Just minutes earlier the doctor had warned him about the need to reduce his cholesterol.

People like this keep smoking and drinking even though they know they’re poisoning themselves. They maintain their high stress lifestyle, knowing that it’s killing them, but convinced that they’ve beaten the odds. Finally it all comes crashing down and as they listen while their loved ones ask God for healing they finally realize they haven’t taken very good care of themselves. They’ve neglected their mind, their body and especially their faith and are in no way prepared for the ordeal they’re facing.

Our Allotted Time in Life is Fulfilled

After Adam and Eve sinned God withdrew the eternal life with which they had been created and they became mortal. He said, “The man has now become like one of us, knowing good and evil. He must not be allowed to reach out his hand and take also from the tree of life and eat, and live forever” (Genesis 3:22). He banished them from the Garden and placed a Cherub with a flaming sword at the entrance to guard it.

Since that time man has been mortal and God has written in the Book of Life the total of days appointed to each one of us. None of us can know what the total of our days is, but when that total has been reached our time on earth has come to an end.

It’s not that God chooses how many days we’ll get, but having seen the end from the beginning He has seen our last day and appointed it to be so. In the meantime we can be healed to prevent our days from being shortened, but once our last day has come our time on earth has ended.

“The days of our lives are seventy years; and if by reason of strength they are eighty years, yet their boast is only labor and sorrow; for it is soon cut off, and we fly away.” (Psalm 90:10)

According to this Psalm, the average life span is about 70 years. But this is a principle and not a rule. And is not meant to imply that we’re guaranteed 70 years of life. However, when a person reaches the upper levels of this 70-80 year range, it does appear likely that his time on earth is nearing an end.

As an example, one night I was called to the hospital to pray for an elderly friend who had been admitted that night. Upon arriving at her bedside, she looked at me with piercing eyes and said, “Are you here to pray for me?” When I said yes she said, “Then pray for Jesus to take me home.” This woman had been in pain for years. She said she was tired, and although she knew her husband would prefer her to stay with him, she felt that it was time for her to go. This woman was sure that if she died she would be with Jesus. So I prayed and I asked for her to be healed, but added that it was her desire to be taken home. It was her desire that the Lord answered, and later that night she died and received the ultimate healing, eternity in the presence of the Lord.

Based on my research, these represent the major reasons why prayers for healing can fail. Certainly there are others, and there are admittedly many unknowns. But my purpose here is to show that God is not arbitrary. He doesn’t heal some and not others based on His own reasons, anymore than He saves some and not others. The idea that He would do such a thing is simply man’s attempt to justify not being healed. Remember, when we try to justify ourselves, we end up condemning God. Better we should spend a lifetime trying to understand the human component of healing than to spend even one hour trying to make God responsible.

Next week we’ll conclude this series with a chapter on who we are in Christ and how it impacts our prayers for healing. See you then.