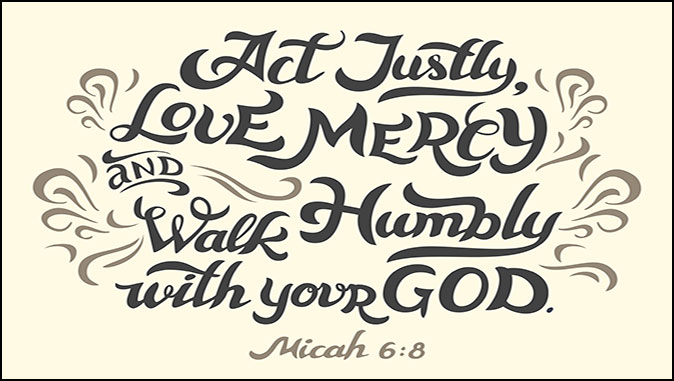 What Does the Lord Want From Me Anyway?
By Jack Kelley

Almost everyone has come up with their own answer to this question, usually a list containing some do’s and lots of don’ts. But amidst all the human opinions and the many admonitions in both old and new testaments to behave in certain ways and do certain things, is there a clear undisputed answer, a bottom line requirement?

So What’s the Bottom Line?

I think there is one. There’s a minimum standard without which any other behavior becomes at best irrelevant and at worst repulsive to the Lord. (see Isaiah 66:3)

Let’s take the Old Testament first. There are several places we could look, but to me the clearest is in Micah 6:8. “He has showed you, O man, what is good. And what does the Lord require of you? To act justly and to love mercy and to walk humbly with your God.” Sounds simple, just three little things, but like most of the bible there’s more here than meets the eye.

What Do You Mean by That?

1. Act justly; make sure your own behavior is above reproach.

2. Love mercy; give thanks whenever you or someone else is spared the deserved punishment for sinning.

3. Walk humbly with your God; recognize that you often fail to act justly, and be grateful to a merciful God who doesn’t give you what you deserve.

Up Close and Personal

Notice these are personal admonitions. Nowhere are we held responsible for another person’s obedience, only for our own. Nowhere are we called upon to judge whether another has met the standard. The Lord makes it clear that He will do that. We need only worry about ourselves.

Trying to live this way is the primary evidence of our love for God. But so many today are much more focused on other people’s behavior than their own. Even the body of Christ seems amply populated by people whose hearts have grown cold. They think it’s their personal responsibility to identify every infraction of the rules (I thought that was Satan’s job). They self-righteously cry long and loud until these infractions are duly noted and fully punished. Like Jonah they actually get angry when some great sinner repents and thereby avoids the penalties, and when someone stumbles or falls they’re quick to question whether the person was ever saved in the first place. When someone confesses, their reaction is to wonder what other sins remain secret. This is neither acting justly nor loving mercy, and reveals a gross lack of humility. 0 for 3.

In the New Testament the definitive passage is John 6:28-29. “Then they asked him, ‘What must we do to do the works God requires?’ Jesus answered, ‘The work of God is this: to believe in the one he has sent.’” This question presented an unmatched opportunity for the Lord to list every additional bottom line requirement. And so He did, for there is only one. We can’t fulfill the first requirement of Micah 6:8 on our own so He came to do it for us. And again we’re not asked to determine whether another has met the requirement. We need only worry about ourselves.

What’s Concealed will be Revealed

Here’s another case where truths contained in the Old are explained in the New. The Old Testament ordinances were established to provide a channel for God’s mercy. By keeping them the people were spared the punishment they deserved for their sins. However, because the remedy provided by their substitutionary sacrifice was insufficient and temporary, the people could never do more than break even (get back to where they had been), and had to regularly repeat it just to stay even. The intention was for them to realize that they could never earn their way into God’s presence; that apart from His mercy they were doomed.

In the New Testament God’s mercy was superceded by His grace; the temporary sacrifice being replaced by the Permanent One. Sacrificing Himself, He took care of everything, forward and back. And it was way more than sufficient. Now the people don’t just break even, but in one fell swoop are forever elevated to a position no one had ever dared dream of; heir to eternity.

In the Old, the best one could hope for was to not lose anything. In the New the least we can expect is unimaginable gain. That’s the difference between mercy and grace. One is not getting what you do deserve; the other is getting what you don’t.

As for humility, next time you see someone stumble or fall, or suffering great torment, recall your own sinfulness and instead of wagging your finger or tongue think, “There, but for the Grace of God, go I,” and give thanks.