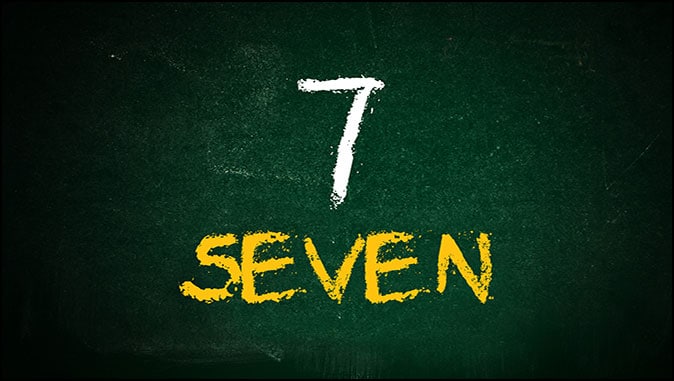 What are the 7 Dispensations?
A Bible Study by Jack Kelley

I’ve been answering questions from so many people for so long that I sometimes forget not everyone who comes to the site has read all of them. As a case in point, I answered a question about the flood where I said it was the second in a series of seven times where mankind would violate the terms of an agreement with God and bring judgment upon themselves. I didn’t think any more about it until I received several questions from people asking what I was talking about and could I list the other six times. I realized they hadn’t read the several answers I have posted over the years on the theological system I follow called dispensationalism.

Dispensationalism is a method for interpreting the Bible. The Greek word from which we get dispensation appears only 7 times in the New Testament and is only translated as such in four of those, all by Paul and all in the King James (1 Cor. 9:17, Ephes. 1:10, Ephes. 3:2, Colossians 1:25). Other meanings of this word are stewardship, administration, and economy.

What Do Dispensationalists Believe?

A dispensationalist believes that God has dealt with humanity in different ways at different times — revealing to us His character and His plan for mankind. These different periods of time are called dispensations.

For example, while salvation has always been by faith, the way to salvation through much of the Old Testament was through Israel and required obedience to the Law as well. That is not the case during the Church Age. And while eternal security is promised to the Church, it was not promised to Israel. Neither was the Holy Spirit sealed within Old Testament believers as is the case with believers in the Church (Ephes. 1:13-14). Therefore, the way God dealt with Israel in the Old Testament took place during a different dispensation than His dealings with the Church in the New Testament. Get the idea?

This is one of the reasons I’ve given in support of my position that Eternal Security won’t be available to post rapture believers. The last seven years before the Lord’s return (Daniel’s 70th Week) will be a time when God deals primarily with Israel again, as He did in the Old Testament. He promised Israel these seven years and has yet to provide them. Daniel 9:24-27 explains this and tells us a temple will be built in Israel during that time, and that animal sacrifices will once again be offered on its altar. While these things were required during Old Testament times they would be both unnecessary and undesirable now unless the Church Age first comes to an end—which will happen with the Rapture. This is why so many dispensationalists believe the Rapture will happen before Daniel’s 70th Week begins.

Some say that dispensationalism is a relatively modern system of theology first proposed by John Nelson Darby in the mid-1800s. But evidence that the early church believed in the principles of dispensationalism can be found in the 2nd Century writings of Justin Martyr and Irenaeus. Justin Martyr saw four distinct periods (dispensations) and gave them the names of the principle players, Adam to Abraham; Abraham to Moses; Moses to Christ; and Christ to Eternity. Irenaeus also saw four periods, from the Creation to the Flood, from the Flood to the Law, from the Law to the Gospel, and from the Gospel to Eternity.

1) Innocence: Between the Creation and the Fall of Man in the Garden

God interacted freely and personally with Adam and Eve during this period. Then they broke the only rule He had given them (Genesis 3:11-13) and were expelled from the Garden. Sin entered the world.

2) Conscience: Between the Fall and the Flood

God allowed man’s conscience to govern his behavior without Divine interference. Because of the sin nature passed down from mankind’s first parents, the result was that “the wickedness of man was great in the earth, and every imagination of the thoughts of his heart was only evil continually” (Genesis 6:5). God pronounced judgment upon the world and destroyed all but 8 members of the human race in the Great Flood.

3) Human Government: From the Flood to Abraham

After the flood, God told Noah to go forth and replenish the Earth (Genesis 9:7). Noah’s descendants disobeyed God’s commandment, setting about instead to build a great city and tower from which to study the stars (Genesis 11:4). God confused man’s language, causing them to stop building the tower, and scattered them through out the world (Genesis 11:8-9).

4) Promise: From Abraham to Moses

God promised Abraham a homeland for his descendants (Genesis 17:8) and a son for him and Sarah (Genesis 17:15-16). But they grew tired of waiting and produced a son on their own, who they named Ishmael (Genesis 16:1-2.15). When God’s promised son Isaac was born, Ishmael was sent away (Genesis 21:8-13) causing enmity between the Jews (descendants of Isaac) and Arabs (descendants of Ishmael) that continues to this day. After Mohammed, a descendant of Ishmael’s, founded Islam this enmity took on religious significance and became even more intense.

5) Law: From Moses to Jesus

God gave Moses the 10 Commandments and promised the Jews a life of peace and plenty in a Kingdom of their own if they obeyed (Exodus 19:5, Exodus 20:1-17). After repeated periods of disobedience which included rejecting their Messiah King, God withdrew His offer of the Kingdom and expelled them from their land (Matt. 21:43, Luke 19:41-44).

6) Grace: From Pentecost to the Rapture — the Church Age

No longer requiring righteousness through works, God granted a righteousness by grace through faith in the completed work of Christ to all who accept, whether Jew or Gentile (Romans 3:21-24). Most will not accept and will be punished through eternity.

Note: It’s important to realize that Grace didn’t replace Law, it just interrupted it.  Law has another 7 years to run, called Daniel’s 70th Week (Daniel 9:24-27), which fills the time between the Rapture and the 2nd Coming. During this time all the nations to which Israel has been scattered will be completely destroyed and Israel will be disciplined in preparation for receiving the Kingdom (Jeremiah 30:4-11).

7) The Kingdom: The 1000 Year Reign of Christ that begins with the 2nd Coming

This time Israel will accept the Kingdom offer (Zechariah 12:10, Zechariah 14:8-9). Satan will be bound (Rev. 20:2), all unbelievers will be expelled from the planet (Matt. 25:41-46), and God will once again dwell in the midst of His people (Ezek. 43:6-7). You’d think the world could finally live in a manner pleasing to God. But we can’t. Eventually, with the exception of Israel, the world will rebel against God and His people. God will send fire to consume them all (Rev. 20:7-10).

What Is God’s Purpose In This?

I think the overarching purpose of these seven dispensations is to demonstrate that there are no conditions under which natural man can behave in a manner acceptable to God. Only the Church is able to do so and then only after being perfected in the rapture. This is why Paul wrote that after the end of the Millennium when it comes time for Jesus to present the kingdom to the Father, He will first destroy all dominion, authority, and power (1 Cor. 15:24).  What that means is when we enter eternity neither mankind nor the angels will ever have the desire or ability to disobey God again. That’s why there isn’t an eighth dispensation called Eternity.

Two of the major changes that dispensationalism, as we know it today, brought us are the return to a literal interpretation of Scripture (especially where it deals with prophecy) and the realization that there’s a distinct difference between Israel and the Church in the End Times. It’s the best tool I know of to determine the context of a passage and understand who its intended recipients are. (Reform theology does not adhere to a literal interpretation of Scripture, treats end times prophecy as allegorical, and blurs the distinction between Israel and the Church to the point where some claim the Church has replaced Israel in God’s plan making Israel an unnecessary part of our times.)

Most dispensationalists believe in a pre-tribulation Rapture, followed by Daniel’s 70th week with its accompanying judgments, and a literal Kingdom of God that will begin with the 2nd Coming and last for 1,000 years. During this time, Israel will be God’s Kingdom on Earth while the Church will be God’s Kingdom in Heaven.

So this is what dispensationalists believe. It’s what I believe and is the theological foundation for all the articles and answers to be found on this site. This is why I said the Great Flood was the second in a series of seven times where mankind would violate the terms of an agreement with God and bring judgment upon themselves. Selah.