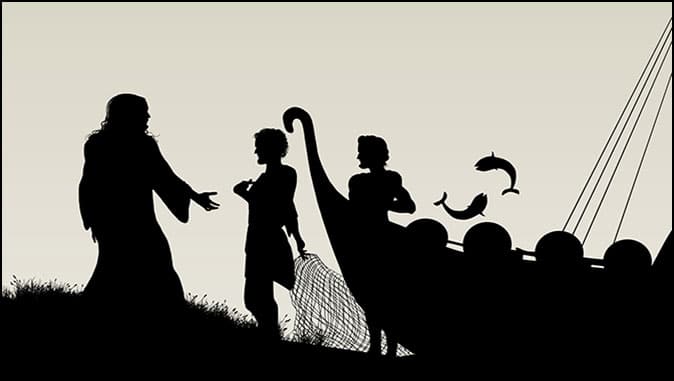 Victory in Failure
By Karen McQuillan

In John chapter 21, the Bible tells us about a time in-between Christ’s resurrection and His ascension where He had a special ministry with His disciples. The disciples are at the sea of Galilee and Peter, in particular, is still raw and obviously troubled by his miserable failing where he denied the Lord three times. He tells the other disciples that he is going fishing and they reply that they will join him.

They fish all night long and catch nothing, and in the early hours of the morning, the Lord manifests Himself to them on the beach and asks them if they have caught any fish. How embarrassing. Professional fisherman, fishing all night and failing to catch anything! I bet they didn’t want to answer Jesus’ question, but they answer “no” and Jesus tells them to cast their net on the other side of the boat.

Imagine what they are thinking at this point? Told to do something so simple…Cast your net on the opposite side of the boat, but they do what Jesus says and haul in a massive load of fish. They get to shore and join Jesus on the beach who has already laid a charcoal fire and has some fish and bread already cooking. He tells them to bring over more of the fish they have just caught and continues cooking their breakfast.

I love that Jesus cares about their physical needs and I think this is a great example of Jesus showing them what it will be like when they too are in resurrected bodies and will be enjoying food when they depart this life. We won’t be like ghosts, sitting around on white clouds and playing harps, but enjoying a real physical experience!

1 John 3:2-3 – “Beloved, now we are children of God; and it has not yet been revealed what we shall be, but we know that when He is revealed, we shall be like Him, for we shall see Him as He is.”

And he said to Him, “Lord, You know all things; You know that I love You.” Jesus said to him, “Feed My sheep”.

So first he meets Peter’s physical needs and then He takes on the broken fellowship issue, which is what sin does. Sin in a believer’s life does not cause us to lose our salvation, however, it breaks our fellowship with our Lord. This is why we need to come to Jesus and ask Him for forgiveness and He will restore our relationship with Him.

1 John 1:9 – “If we confess our sins, He is faithful and just to forgive us our sins and to cleanse us from all unrighteousness”.

Jesus is making Peter remember his bragging the other night where he claimed to love Jesus more than the other disciples did. Jesus is humbling him, whittling him down and even referring to him as Simon, his old name.

So here is a FULL restoration and here the Lord is deepening Peter’s relationship with Him. In the process, Jesus is putting a calling on Peter’s life. This man who denied the Lord three times, whose mouth was used as an instrument of Satan to try and talk Jesus out of going to the Cross, who after stepping out onto the water, lost faith and sank into the sea.

Some people would look at this man as a failure, someone who would be disqualified from ministry. Yet what is the Lord doing here in this restoration process? The Lord is giving Peter a ministry to “Feed my sheep” which is one of the most important responsibilities of a pastor/teacher in a church. It can also be true for those who are in the important position of teaching children whether in the home or as a Sunday school teacher.

Jesus is not only giving him his ministry assignment but revealing his destiny.

Jesus reveals to him the kind of death he would suffer down the track in His name.

Peter would eventually be crucified upside down because he didn’t feel worthy enough to die the way Jesus had. Even in death, he would glorify the Lord. And even after this restoration and calling into ministry, Peter was still bumbling and putting his foot in his mouth.

As Jesus and the men are walking along, Peter points to John and asks the Lord what He plans to do with him. Jesus turns and says that it is none of his business what Jesus does with John. The Lord is basically saying “It is none of your business what I do with John. I’ll take care of that person. I want you in a personal walk with me and you, as an individual, follow ME”.

There are times when we get mixed up and confused by life and we run in the wrong direction. There are times when we fail friends and family and our own expectations of ourselves, and we fail the Lord. When that happens, we might expect the Lord to leave us in the back room of self-pity for a bit to lick our wounds.

But Jesus calls us to come back into the fight. He loves us and has plans for us, and now more than ever in these last days He needs a people who will love Him with all of their hearts and souls and are willing to get back into the game after set-backs and failures and to be that shining beacon on the hill for the lost and dying and to encourage others, and be a feeder of His Sheep.

Jesus restored Peter and he will restore you. No more regrets.