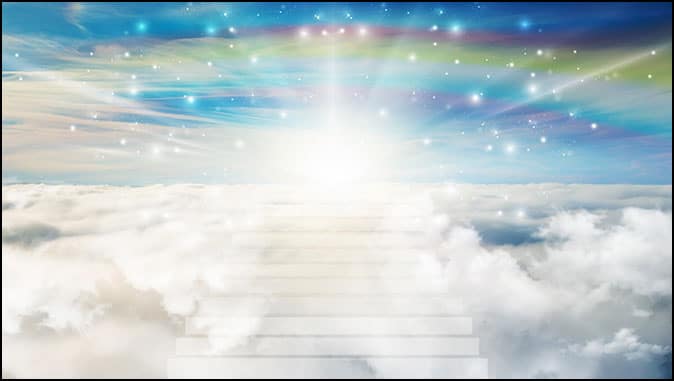 Thoughts On Eternity
By Jack Kelley

Whenever it seems like the whole world is about to explode into violence and destruction, I find that a moment or two spent dreaming about the world to come helps restore a sense of peace and hope. Now is such a time. Let’s take a trip into eternity.

“No eye has seen, no ear has heard, no mind has conceived what God has prepared for those who love him.” (1 Cor 2:9)

We’ve all noticed differences in friends and family members that can’t be attributed merely to genetics or environmental conditioning. Things like shape and color preference, for example. Cosmetologists and fashion experts describe these preferences in terms of the four seasons when choosing colors for make-up and clothing that will help us look our best and make us most attractive to others. Decorators customize our surroundings to increase our comfort at home or in the office by using the shapes, colors and textures that suit our personalities. While there are many common perceptions we share, we are distinguished from each other by our individual preferences.

We also come from the womb with unique traits and quirks that we display almost from birth, having had no opportunity to learn them. One’s cautious, another’s adventuresome, one enjoys solitude another prefers company. Energy levels, basic outlook, drive and ambition differ remarkably even among siblings who share both genetic and environmental factors. Remember Jimmy and Billy Carter?

When seeking a mate we prefer those who share some of our preferences, but eventually grow tired of those who are just like us. “Vive la difference,” the French say. How boring it would be if we were all the same: cookie cutter companions.

And yet when considering eternity (when they think of it at all) some Christians see us all becoming alike. They believe we’ll all be 33 years old because they think that was the Lord’s age when He went to Heaven. They see us all in white robes, with blue eyes and brown hair, sitting on a cloud with our harps, attending some endless worship service. Really!

Behaviorists say the reason that children are generally happier than adults is that children spend most of their time gaining new skills, knowledge, and experience. The problem with most adults is that we grew up, and the thrill of living has been greatly diminished because of our now predictable world. Some of us haven’t had even a new thought in years, let alone a new experience.

Will You Grow Up?

Some people retain their child like enthusiasm by dramatically changing their lives every so often. I think of my friend Pratt who has built and sold businesses on a regular basis, becoming an engineer, designer, builder, champion auto racer and ocean going sailor along the way. He and Brenda began married life at 17 in the cab of a dump truck, the only thing they owned. He designed and built the trailers for their trucks, their home, and his winning race cars. I mean built: from the ground up, with his own hands. A few years ago they bought a 50-foot catamaran and sailed it across the Atlantic. Alone.

Bud, another friend, was the same kind of guy. If you play racquetball you play on a court he designed and use a variation of the racquet he invented. But he also designed and built airplane parts, golf clubs, restaurants, hotels, homes and churches. He was the first one ever to water ski barefoot, and some of the speed and distance records in that sport he set during his days as a pro at Cypress Gardens still stand. His family’s construction company dredged Pearl Harbor, making it a deep water port. He was a pilot and a sailor and a builder. At his funeral he was described as having achieved more in his lifetime than a dozen ordinary men.

Been There, Done That

Heaven’s going to have to be pretty amazing to hold these guys’ interest. They’re among the happiest men I’ve known, having refused to grow up and settle down, and I mean that in the most positive sense. And remember: they didn’t start out just to have a lot of fun. They continually expanded the limits of their skills, knowledge and experience, creating products, jobs, and millions of dollars in economic benefit along the way. Happiness is a by-product of their life experiences, not its purpose. Are they now going to be content with the heaven I described above, with white robes and harps? I think not.

Take a minute to imagine your eternity based on that criteria. Now please don’t let your imagination be limited to something like the greatest amusement park ever. Happiness is not about meaningless diversionary activity, it’s about expanding your mind with new knowledge, skills and experience. So let your mind go free to wander among the possibilities.

For example, John gave us only the basics of the New Jerusalem, foundations, gates, overall exterior dimensions and such, so we don’t really know what it’ll be like when we get there. Suppose our eternal environment was designed with our individuality in mind and actually mirrored our uniqueness. What if each of us found it to be painted in our favorite colors using our favorite shapes, sizes and textures and what if it expanded before us like a giant kaleidoscope so that as we grew familiar with it, it grew too, always stimulating and exciting and never boring FOREVER.

What if we could attempt anything we could imagine without the possibility of failure? What if we could amaze and astound ourselves with newfound capabilities that were always there within us, but had only become available because the Lord’s sacrifice of love had finally released them from the limitations imposed on us by our Earthly existence.

I like the mountains. My wife prefers the beach. What if our eternity suited both of us so that we could experience our favorite places together at the same time? Think about that. I would be in the mountains and she would be on the beach. But we would also be together. I would see everything in my favorite shapes and colors and she would see everything in hers, but we’d both be looking at the same things.

“But wait a minute,” some say. “We’ll all be different there from the way we are here.” Maybe so, but we’ll also be the same unique person we’ve always been. We don’t get some huge lobotomy to dumb us down and keep us passively content like they did in “One Flew Over The Cuckoo’s Nest.”

Certainly we’ll spend lots of time worshiping God, just as we do here, giving thanks for all He’s given us. But the earthly bonds that restrain us will be released, our brains energized, our senses sharpened, and our unique capabilities revealed, not only for worship, but for all our experiences. We’ll finally become all that we were created to be, God’s work of art: the highest example of His creative ability. Got any idea what that means? Got any idea how thankful you’ll be?

Eternity has to be enough to thrill even those who have experienced life on earth to its fullest, and not for just a day or two, but forever. It has to take each of our unique preferences and interests to the max, while doing the same for everyone else and at the same time.

Like Paul said, “No eye has seen, no ear has heard, no mind has conceived what God has prepared for those who love him.” (1 Cor 2:9). Even in your wildest imagination you can’t come close to describing the joy awaiting you. Remember Paul actually went there and saw it (2 Cor. 12:2-4). He should know.