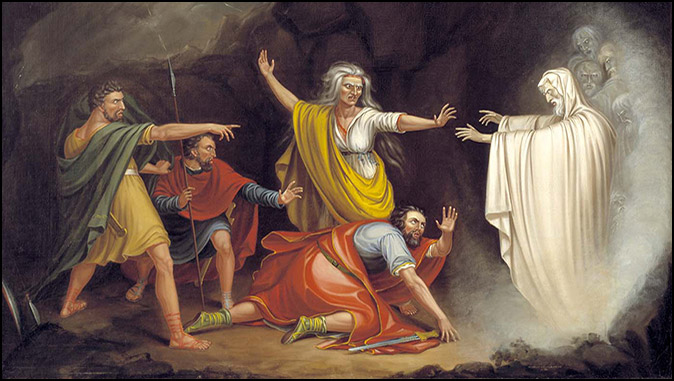 The Witch at Endor
By Chuck Missler

In 1 Samuel 28, we find a bizarre chapter in the history of Israel. Israel’s King Saul has been long preoccupied with the pursuit of his rival David and has neglected the growing Philistine threat to Israel. The Philistines decide to undertake a new strategy and set up their camp in Shunem near the Jezreel Valley south of Mount Gilboa. There they can use their chariots to cut Saul off from the northern tribes, and Saul sees the danger and is terrified. The Israelite forces are camped about five miles to the south of Mount Gilboa, and Saul doesn’t know what to do.

During this time, David has gone to live with the Philistines. They trust him because King Saul wants David dead, and they have no clue David goes out and destroys entire groups of Canaanites in his spare time.1 David plays the part of the loyal Philistine subject so convincingly, he’s even been appointed as bodyguard to Achish, the king of Gath.

Meanwhile, the prophet Samuel has died, and the LORD is not answering Saul through the priests or the prophets. Saul is full of fear over the Philistines, and the LORD is not giving him any counsel about what he should do. Saul has removed all the mediums and wizards from the land, which was good, but we see here the typical weakness of Saul in doing what’s right. He’s chased the occultists out of the land, but now that he must go fight the Philistines and God isn’t answering him, he decides he’ll go see a medium. If the other prophets can’t help him, he figures maybe he can speak to the dead Samuel and get some advice.

Saul has a problem. He disobeys God over and over again. In 1 Samuel 15, Saul did not obey God to utterly destroy everything pertaining to the Amalekites. He feared the people and kept some of the spoil rather than just doing what God said. For this, God told Samuel that He was through with Saul. Samuel grieved all night over it, because he loved Saul, but in the morning Samuel told Saul the bad news. It was over for him as king:

“Behold, to obey is better than sacrifice, and to hearken than the fat of rams. For rebellion is as the sin of witchcraft, and stubbornness is as iniquity and idolatry. Because thou hast rejected the word of the LORD, he hath also rejected thee from being king.” – 1 Samuel 15:23

Disobedience was a constant problem for Saul. When God made it clear that David would be the next king, Saul didn’t accept the Lord’s will. Instead, he tried to hunt down David to kill him. It seems prescient that Samuel equated Saul’s rebellion with witchcraft, because here at the end of Saul’s life, the king throws away everything he knows to be right and goes to consult a medium.

Saul’s servants inform him that a medium lives in Endor, a town between Mount Tabor and the Hill of Moreh in the Jezreel Valley. She has managed to survive the purge, and she’s a mistress of necromancy – one who consults the dead to determine the future. Now, the punishment for mediums and consulting mediums is death, and the witch knows this. Saul should have remembered it as well, because this penalty is dealt against Saul the very next day in the Valley of Jezreel.

Saul dresses himself up and disguises himself so he won’t be recognized as the king, and he asks this medium to bring up a familiar spirit. She protests that he’s setting her up to be executed, because King Saul has made all those kinds of activities illegal. He reassures her that she won’t get in trouble, so she asks him whom it is he wants to speak to, and he says, “Samuel.” She goes to bring up Samuel, and when she sees him, she’s shocked and cries out with a loud voice!

This might indicate that the woman was generally a charlatan, because she apparently wasn’t expecting to really see Samuel. When the old man appears to her, she yells. Maybe the witch had a normal spirit she depended on, and that spirit didn’t appear; Samuel appeared instead.

Now we’ve got a problem right here. Whom did the witch at Endor really see? Was it Samuel himself pulled up from his temporary rest in Sheol, or was it a demon impersonating Samuel? On one hand, all the woman did was describe an old man in a mantle, and Saul “perceived” it was Samuel. On the other hand, the things Samuel say certainly sound correct. It’s possible that we have here a genuine appearance of Samuel that God himself brought about. At the very least, the following prophecy by Samuel came true the next day.

“And Samuel said to Saul, Why hast thou disquieted me, to bring me up? And Saul answered, I am sore distressed; for the Philistines make war against me, and God is departed from me, and answereth me no more, neither by prophets, nor by dreams: therefore I have called thee, that thou mayest make known unto me what I shall do. Then said Samuel, Wherefore then dost thou ask of me, seeing the LORD is departed from thee, and is become thine enemy? And the LORD hath done to him, as he spake by me: for the LORD hath rent the kingdom out of thine hand, and given it to thy neighbour, even to David: Because thou obeyedst not the voice of the LORD, nor executedst his fierce wrath upon Amalek, therefore hath the LORD done this thing unto thee this day. Moreover the LORD will also deliver Israel with thee into the hand of the Philistines: and to morrow shalt thou and thy sons be with me: the LORD also shall deliver the host of Israel into the hand of the Philistines.” –
1 Samuel 28:15-19

Now, while Satan is the accuser of the brethren, and it might have pleased a demon to give Saul this bad news, the Bible does identify this person as Samuel in several places. That’s interesting.

After it’s over, Saul is upset, but the medium kills a calf and feeds Saul meat and bread. Then he and his servants leave to return to the battlefield, where Saul will die the next day along with his sons.

It’s also interesting that Samuel never answers Saul’s initial question about what he should do. The harsh reality is that there’s nothing Saul can do because of his disobedience. The battle that follows the next day at Mount Gilboa in 1 Samuel 31 is a disaster. From the beginning, Saul’s army is routed and slaughtered, including his sons. Saul is wounded by an arrow, and he asks his armor bearer to thrust him through with a sword and kill him. The armor bearer won’t do it, so Saul manages to fall on his own sword in an effort to kill himself. When the Philistines find Saul’s body, they dishonor him by cutting off his head, stripping his armor, and hanging his naked body on the wall in the open square.

The great disgrace of Saul was not in how the Philistines treated his body, it was his lack of obedience to the will and the word of God. As we read his story, though, we all know that we could easily be in Saul’s place. We have all been guilty of direct disobedience to God. We’ve all decided we were going to do things our own way instead of His. We fear people rather than fearing the Lord, and if we’re honest with ourselves, we might have saved some of the best of the spoil from that battle with the Amalekites, just as Saul did.

Are we like Saul? Would we chase the witches and mediums out of the land, only to turn to them in a moment of desperation? Are we willing to say, “Yes, seeking knowledge or power through the occult is wrong,” in one minute, but then take in a Tarot card reading the next?

Most importantly, how do we take care of our children? At Halloween, we don’t want them exposed to ideas and experiences that could open them up to spiritual invasion. Do we teach them well, or do we just give in and let them do whatever?