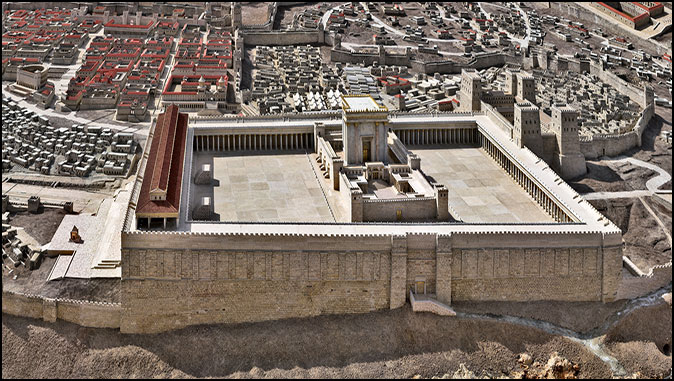 The Temples of the Bible – Part 2
By Andy Woods

One way to get a perspective on what God has done, is doing, and will do, is to become familiar with the various temples of Scripture. To begin with, it is necessary to understand the four Jewish temples. Two of these temples existed in past Jewish history. Two of these temples will exist in Israel’s future. My previous article gave a brief overview of the first two historical temples. That article concluded by noting that the Scripture predicts a coming third temple that will be desecrated by the Antichrist. Although the Scripture clearly predicts the reality of the coming third temple in the Tribulation period (Dan 9:27; Matt 24:15; 2 Thess 2:4; Rev 11:1-2), much debate persists concerning how this temple will actually be rebuilt. This article will briefly explore some of these issues.

Not A Spiritual Temple

Revelation 11:1-2 says, “I was given a reed like a measuring rod and was told, ‘Go and measure the temple of God and the altar, and count the worshipers there. But exclude the outer court; do not measure it, because it has been given to the Gentiles. They will trample on the holy city for 42 months” (italics added). Notice that in Revelation 11:1 John was told to measure the temple. According to Ezekiel 40 and Zechariah 2, when God measures something, He is ascertaining the spiritual depth of His people. Many commentators believe that God is telling John to measure the Tribulation temple to demonstrate that this third temple will be built out of Jewish nationalistic pride rather than for genuine spiritual reasons. Remember, at this point in the Tribulation period, the nation of Israel as a whole is still in unbelief. This unbelief explains why John, just a few verses later, analogizes Jerusalem’s spiritual condition to the depravity of Sodom and the bondage of Egypt (Rev 11:8). This unbelief explains why their decision to rebuild this temple will be motivated by something other than a sincere and genuine desire to glorify God.

Times of the Gentiles

Many conservative and orthodox leaders in Israel have a great desire to see the Jewish temple rebuilt. Because so many Jews are intermarrying with Gentiles, they fear that the Jews may soon lose their distinctiveness as a people and a culture. The temple was the center of Jewish political, cultural and religious activity in the Old Testament. Because the temple was once the hub of Jewish national life, they believe a rebuilt temple will enhance their goal of furthering Jewish cultural distinctiveness. As a result, the plans have already been laid for a third Jewish temple. A visit to the Temple Institute in Jerusalem will reveal that a miniature model of the proposed temple is already in existence. Committees have been formed for the express purpose of seeing the temple rebuilt. Jewish priests are being trained to perform religious duties in the temple. Priestly garb and religious utensils have already been prepared.

The Dome of the Rock Problem

Most believe that the third temple will be rebuilt on the original temple mount where the Old Testament temples once stood. According to the traditional view, the archeological evidence suggests that the temple mount is located directly under the Dome of the Rock. This rock is a holy site in the Islamic faith since it is the place where Mohammed allegedly ascended to Allah. Needless to say, any attempt by the Jews to remove the Dome of the Rock in an attempt to rebuild their temple would result in a holy war with their Islamic neighbors. If this traditional view is accurate, it appears unlikely that the third Jewish temple will be rebuilt in the near future.

Antichrist as the Mediator

If the Kaufman conjecture is accurate, two of the greatest religious artifacts of the world, the third Jewish temple and the Dome of the Rock, may one day stand side by side of one another. Even if the Jews attempt to rebuild the temple in Jerusalem without disturbing the Dome of the Rock, such an action could cause the Jews to incur the wrath of the surrounding Muslim countries. According to the Islamic faith, Jerusalem is the third holiest city in the Muslim religion. As previously mentioned, it is believed that Jerusalem is the city where the prophet Mohammed supposedly ascended back to Allah. Thus, the more the Jews cause Jerusalem to look like a Jewish city, the more they run the risk of being attacked by the surrounding Islamic fundamentalists. This explains why any Jewish attempt to rebuild the temple may result in a holy war.

Therefore, it is commonly believed that the Jews will be able to rebuild their temple only after the Antichrist comes to power and begins to rule the world. Only the Antichrist will have the skill, power, and charisma necessary to peacefully mediate the differences between the Jews and the Muslims so as to allow the Jews to rebuild their temple next to the Dome of the Rock without causing a holy war (Dan 9:27a; 1 Thess 5:3a; Rev 6:2). The actual work of rebuilding the Jewish temple will thus most probably commence during the first half of the Tribulation period. While much of this is speculation, we do know for certain that the temple must be standing at the midpoint of the Tribulation period so that the Antichrist can desecrate it.

What Will Happen to the Third Temple?

The first temple was destroyed by the Babylonians (2 Kgs 25:9) in 586 B.C. The second temple was destroyed by the Romans (Matthew 24:2) in A.D. 70. The Scripture does not specifically indicate what will happen to the third temple. Some believe that it will be destroyed as the judgment of God is poured out upon the world during the second half of the Tribulation period. Others believe that it will be preserved and eventually cleansed and dedicated in preparation for the millennial temple (Dan 12:11). However, beyond this third temple, a fourth temple is predicted. My next article will briefly examine this coming fourth temple as well as briefly discuss the metaphorical temples God indwells in the present Church Age.

The Best Verses In The Bible