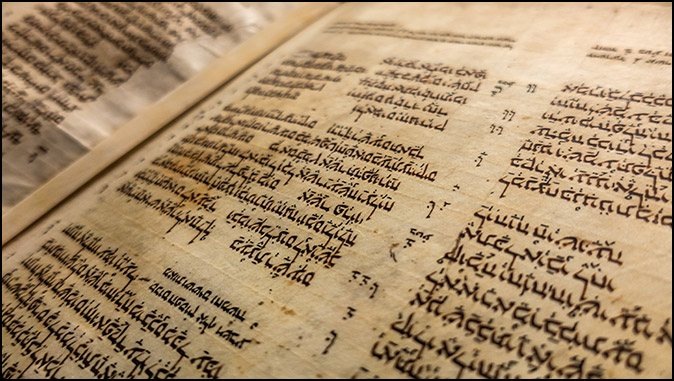 The Septuagint Vs. the Masoretic Text – Part 2
By Randy Nettles

After the destruction of the First Temple in approximately 586 BC, the religious leaders of Judah split into several groups, each with their own Torah text. The rabbis took the Proto-Masoretic text of the Torah and the Samaritans took theirs which was called the Samaritan Pentateuch. The Qumran community had assembled texts of different types that were written (throughout the following centuries) by a religious sect which most scholars believe were the Essenes. These documents would be found hundreds of centuries later and are now known as the Dead Sea Scrolls. They were written in both Hebrew and Greek. In 250 BC, a Hebrew version of the Torah was translated into Greek and would later be used by the early Christians. This came to be known as the Septuagint or LXX text of the Torah. The other books of the Tanakh would be added over time.

As I said in Part 1 of this article, while most of the differences between the Masoretic, Septuagint, and Samaritan texts are minor word or phrase variations and sentence structures, a few are quite significant. It is not in the scope of this article to examine all of these scripture discrepancies. Instead, we will only be concentrating on the numbers given in the genealogies and chronologies of the antediluvian and post-flood patriarchs found in Genesis 5 and 11.

Genesis 5 gives the genealogy from Adam to Noah and his three sons. For each antediluvian that is mentioned, age is given for three events in their lives: their age when they had their son (in the lineage leading to Noah), years lived after their son’s birth, and their age when they died. Let’s look at an example in the MT. In some English translations, it reads “When Seth had lived 105 years, he became the father of Enosh. After he became the father of Enosh, Seth lived 807 years and had other sons and daughters. Altogether, Seth lived a total of 912 years, and then he died” (Genesis 5:6 – NIV translation). Some translations say “he begat (begot) Enosh” or “he became the father of Enosh.” The Hebrew word for this term is (way·yō·w·leḏ) which can also mean “to show lineage.”

We know Seth was the third son of Adam, after Cain and Abel, and we know Adam as well as the other patriarchs (both before and after the flood) had children after the designated son mentioned in scripture. The only other patriarchs that we know for sure that had children before the designated son is Noah and Terah. I am assuming the others are all firstborn sons. The wording in scripture is rather vague on this issue as it only says “and had other sons and daughters.” Does this mean the other patriarchs only had other children after the designated one and none before? Evidently, Noah and Terah only had three sons, as the Bible doesn’t say they had other sons and daughters. It appears that Noah, Terah, and Abraham all had children in their old age, relatively speaking.

Ten antediluvian patriarchs are mentioned in this lineage from Adam to Noah (inclusive reckoning), as per Genesis 5. Genesis 6 describes the wickedness of the earth during the antediluvian age. Genesis 7 describes the Great Flood. Genesis 11 gives the lineage of Noah’s son, Shem. In this article, we are only concerned with Shem’s descendants as this is the lineage that begat Abraham, David, and Jesus. Noah and his family (and the animals) exited the ark in 1657 AM (Anno Mundi- the year of creation) according to the Masoretic Text. 1 Chronicles 1:24-34 also gives the genealogies of Shem through Abraham, as well as Isaac and Jacob (Israel).

The four charts shown below represent the Genesis 5 and 11 genealogies for both the Masoretic (MT) and Septuagint (LXX) texts. The first two (MT and LXX) reckon the chronology from the year of creation (Anno Mundi) and the next two (MT and LXX) reckon the chronology from the BC-AD calendar year. The starting point can be determined from a fixed point in history that most scholars can agree on, such as the Exodus in 1446 BC or the destruction of the first Jewish Temple in 586 BC, etc. The years of the Septuagint charts were determined by an English translation of the Septuagint Bible found at Read the Septuagint Bible w/ Apocrypha Free Online. It basically coincides with the earliest LXX manuscript known as the Septuagint Vaticanus MS.

The Chronology of Genesis 5 and 11

In the Greek Septuagint text of Genesis 5, there are 2242 years from the creation of Adam to the Flood. If you notice the above LXX charts, they show Methuselah dying 14 years after the flood. Obviously, this is an error that is corrected with a revised LXX manuscript later in history (see below). In Genesis 11 there are 1232 years from the Flood to the birth of Abraham. There are 3474 total years from Adam to the birth of Abram.

Jacob and his family moved to Egypt in 1876 BC. According to Exodus 12:20, the children of Israel were in Egypt for 430 years. That would place the Exodus in 1446 BC. The 430 years in Egypt are known as the “long sojourn.” However, the Septuagint version adds “and in Cainan,” so that would only be 215 years in Egypt. This is known as the “short sojourn.” For the purpose of this article, we will go by the long sojourn.

1 Kings 6:1 says, “And it came to pass in the four hundred and eightieth year after the children of Israel were come out of the land of Egypt, in the fourth year of Solomon’s reign over Israel, in the month Zif, which is the second month; that he began to build the house of the Lord” (1 Kings 6:1). 480 years minus 1446 BC is 966 BC. That was the year Solomon began to build the Holy Temple in Jerusalem. This is as far as we will take this chronology study. See the above link for further Biblical chronology.

Age Discrepancies Between the Septuagint and Masoretic Texts

The numerical differences found in the three textual witnesses of the genealogies of Genesis 5 and 11 (MT, LXX, and the Samaritan Pentateuch) have been the subject of debate and controversy for at least seventeen centuries. Each textual interpretation yields a different chronology from the creation of Adam to the birth of Abraham, as you can tell by the charts above. I have listed the individual differences found in the MT and LXX below. As I said before, when you add them up, the difference is 1466 years. Evidently, one of them has to be wrong. More on this later.

The majority of the time-span differences in both categories (life span, begotten age) amount to 100 years longer for the patriarchs recorded in the LXX. Regarding the life span category for Genesis 5, there is only one discrepancy and that is Lamech, which doesn’t amount to that much (6 years). However, there are eight discrepancies in the Genesis 11 account. Regarding the paternal age (begotten) category, there are eight discrepancies in the Genesis 5 genealogy and seven in the Genesis 11 genealogy.

Some of these differences can be attributed to scribal errors that occurred when new copies were being made from the manuscript texts that were being used at the time, but some of them seem to be intentional. This is called a recension, where a deliberate editorial revision of a text is made. It appears either the LXX was intentionally inflated to create a longer chronology or the MT was deflated to give a shorter chronology. There have been many theories on why this was done, and you can find plenty of them online (for either side), but we will refrain from doing that with this article.

In comparison with the manuscript evidence for both the Hebrew text and the Samaritan Pentateuch for which textual variants (specifically chronogenealogies) are absent, the LXX doesn’t fare as well. There are several major uncial manuscripts (MSS) of the Greek LXX from the 4-5th century AD. The oldest MS is that of the Vatican Library called Vaticanus and was written in the 4th century AD. Another old MS we have available is the 5th-century Alexandrinus Codex. Both manuscripts contain the majority of the Greek Old Testament and the majority of the Greek New Testament. We used the information from the Vaticanus MSS for our charts.

By the time the Alexandrinus Codex (and possibly others) of the LXX was written, there were several changes made to the chronogenealogies, as I noted above with the asterisk symbol (*).

Regarding the begotten ages of the patriarchs, Methuselah’s age was changed from 167 to 187 years. Nahor’s age was changed from 179 to 79 years. By inflating Methuselah’s age by 20 years it pushed the year of the flood back 20 years. The result was Methuselah dying six years before the flood and Lamech 35 years. This Alexandrinus MSS recension corrects the mistake of the earlier manuscript which had Methuselah dying after the flood. Some recensions have the begotten age for Methuselah at 182 years, which would mean Methuselah died the same year of the flood, similar to the MT.

The Samaritan Pentateuch’s genealogies for Genesis 5 are basically the same as the MT for the begotten ages except for Jared, Methuselah, and Lamech. They are deflated by 100, 120, and 135 years respectively. Their lifespans are different as well. Jared’s has been deflated by 65 years, Methuselah’s by 249 years, and Lamech’s by 124 years. This would place all three of them living after the flood, which isn’t scripturally correct. This would place both Methuselah and Lamech dying the year of the flood in 1615 AM (anno mundi).

Another unique feature of the LXX is the introduction of a Cainan in the list of generations in Genesis 11. After Shem and Arpachshad, a second Cainan is listed who lived 460 years and who was 130 years old when his first-born son was born. This Cainan does not appear in the Hebrew text, nor is he found in the Samaritan Pentateuch, Vulgate, or Syriac versions. Josephus does not have him listed either. However, he is found in the Book of Jubilees. Whereas the LXX gives the figure of 130 as the age of Cainan at the time of the firstborn, the Book of Jubilees assumes the figure of 57 years. Although there have been numerous speculations, the mystery of this Cainan remains largely unresolved. It appears the LXX needs this patriarch in the lineage to acquire the 2166 BC date for Abraham’s birth.

In the next installment Part 3, we will examine some of the many explanations or theories on why one of these manuscript texts was either inflated or deflated.