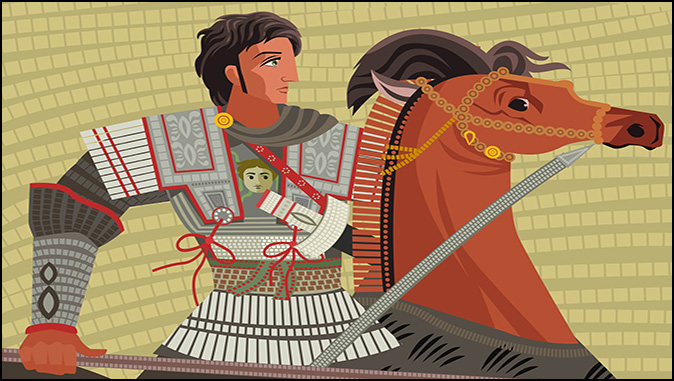 The Prophet, The Priest, And The King
By Jack Kelley

I think you’ll agree that this is a fascinating account of how God used Daniel the Prophet, Jeduah the High Priest, and Alexander, King of Greece, to prepare the world to receive the Gospel, beginning over 500 years before the fact.

Alexander The Great was born in 356 BC to Philip, King of Macedonia, and Olympias, his wife. As a boy he saw how his Macedonian countrymen, a loose knit group of autonomous tribes, experienced impossible difficulties in uniting together into a strong cohesive force. Because of this the Persians, rulers of the known world, kept them under subjugation. Alexander was particularly incensed when the Persians defeated and humiliated his father, treating his people cruelly.

He determined that their problems were due primarily to an inability to communicate clearly with one another due to the many individual dialects they had developed. This caused misunderstanding and distrust, which resulted in a reluctance to fully commit to one another.

With the help of his father Phillip, Alexander crafted a new language, later called common Greek or Koinonia, taught it to the tribal chieftains, and convinced them to use it when communicating with each other. Soon their disagreements were resolved and their mutual trust restored. What had been a rag-tag mob of self-interested tribal factions was on the road to becoming a powerful army.

When Phillip was killed through the treachery of the Persians, Alexander at age 20 became king of the now unified Greece, and vowed revenge. Bringing his newly trained army onto the battlefield at Issus, Alexander first defeated the Persians in 333 BC. Two years later he crushed the 100 thousand strong Persian army with just 40 thousand of his own men, giving him access to all of Asia Minor or what we would call the Middle East. This fulfilled a prophecy in Daniel 8:5-7.

Before his death, King Phillip had told his son that Macedonia was too small for him, and that he should set his sights on Persia and then the entire world.

Having defeated the Persians, Alexander set about accomplishing the rest of his goal. He quickly gobbled up Antioch, Damascus and Sidon and found himself outside Tyre, a formidable target that great generals of the past had been unable to subdue. To fortify itself this mainland Phoenician city had literally been dismantled and rebuilt on a small island offshore. The Phoenicians (modern Lebanese) were accomplished sailors and had no trouble defending themselves from the weaker navies of their would be attackers. Replenishing themselves by sea, they could endure endless siege from land forces as well. The Assyrians had spent 5 years in a failing effort to defeat them, and even the Great Nebuchadnezzar gave up after a 13 year siege. (Ezek. 29:17-20 says that as a reward for his noble effort, the LORD gave Nebuchadnezzar all of Egypt.)

So powerful and rich had the city of Tyre become that its King presumed himself to be the personification of the Phoenician god Melkarth, ruler of the seas. This so angered the LORD that He declared destruction on Tyre (Ezek. 28:1-10) and chose the Greeks as His instrument. Alexander scraped up the remains of the dismantled mainland city and began building a causeway out to the island. Within 7 months he had completed his land bridge and defeated the island fortress in fulfillment of Zechariah 9. The Philistine coastal cities in the south fared no better.

“Tyre has built herself a stronghold; she has heaped up silver like dust, and gold like the dirt of the streets. But the Lord will take away her possessions and destroy her power on the sea, and she will be consumed by fire. Ashkelon will see it and fear; Gaza will writhe in agony, and Ekron too, for her hope will wither. Gaza will lose her king and Ashkelon will be deserted. A mongrel people will occupy Ashdod, and I will put an end to the pride of the Philistines.” (Zech. 9:3-6)

Now Alexander set his sights on Jerusalem. The High Priest Jeduah had refused his earlier demand for provisions and men to help him conquer Tyre claiming that a treaty with Persia prevented Israel from helping the Greeks. Alexander was now intent upon showing the Jews who they should have made treaties with. According to Josephus, Jeduah and all of Jerusalem sought the LORD in terror, with prayer and sacrifice. The Lord told Jeduah not to worry, but for him and the priests to get dressed in all their finery, open the gates and go out to greet Alexander when he arrived.

They did just that. In all their white linen, purple robes and golden headdresses the priests gathered behind Jeduah, threw open the gates to the city, and went out to meet Alexander. Stunned by this greeting, Alexander dismounted and bowed down before Jeduah. The Jews couldn’t believe their eyes! When he was asked about it, Alexander replied, “I didn’t pay homage to him (Jeduah), but to the God Who made him His High Priest.”

Then he explained that one night several years previously when he couldn’t sleep for thinking about how he might defeat the Persians he had a vision in which he saw Jeduah and all his priests dressed and gathered before him just as he had seen them that day. In his vision Jeduah had told him that the LORD would guide his armies and would lead him to victory against all his enemies including the Persians. Jeduah had urged him not to delay but to proceed immediately. A short time later Alexander defeated the Persians and on that day outside Jerusalem the vision became reality. Then he went up to the Temple and made sacrifice to the LORD, sparing the city.

Afterward, Jeduah brought out the scroll of Daniel and pointed to the portion we would call chapter 8 in which Daniel’s vision of a one-horned goat defeating a ram represents a king from Greece defeating the Persians. (This vision had come to Daniel over 200 years earlier in 551 BC, and the angel Gabriel had personally interpreted it as such in Daniel 8:20-21.) Alexander understood that he was the king of whom Gabriel had spoken (Antiquities of the Jews, Book XI, chapter VIII Part 5).

From that time forward Alexander gave the Jews great privilege in his kingdom allowing them to keep to their own laws and traditions, not only in Jerusalem but in the rest of the kingdom as well. Other cities, having heard what happened in Jerusalem, flung open their gates just as the LORD had commanded Jeduah, hoping for similar favor. And so Alexander conquered many of them without a fight.

Remembering the success he had in unifying the Greek tribes with a common language, Alexander enforced the use of his common Greek wherever he went. It was his way of assuring peace in his kingdom. Within a short span of time all of the known world could read and speak Greek no matter what their native tongue. It was the world’s official language even during Roman times several hundred years later.

And so it was that when the Gospels were first written and circulated, and when the Apostle Paul wrote and spoke to audiences from northern Africa around the Eastern end of the Mediterranean and all the way up into middle Europe, the language in which the Good News was shared and understood was Alexander’s common Greek.

The Prophet Daniel had foretold it, the Priest Jeduah had enacted it, and the King Alexander had fulfilled it. But long before the foundations of the world were laid, the One Who is all three, Prophet, Priest, and King, had decreed it.