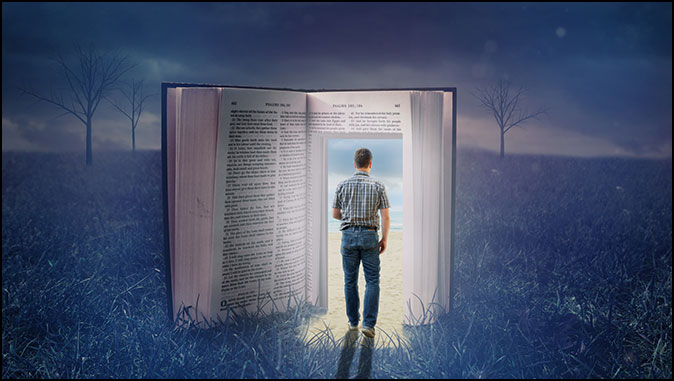 The Necessity of Proclaiming God’s Word in Biblical Times
By Jonathan C. Brentner

Why do so many believers today remain blind to the numerous signs that we live in the last days?

I believe a key reason for this lies with pastors and teachers today who in large numbers embrace amillennialism, a belief system that dismisses biblical prophecies related to Jesus’ thousand-year rule and the restoration of a kingdom for Israel. As a result, they regard the miraculous emergence of Israel as a nation as mere coincidence without any prophetic significance.

It stands to reason that if one dismisses the most significant piece of God’s prophetic calendar, the miracle of Israel’s current existence, one will also miss all the many other signs that we live in the season of Jesus’ appearing.

Scoffers claim that those of us with such awareness of the times interpret Scripture with a newspaper in one hand and the Bible in the other hand. However, just the opposite is true.

1. Isaac Newton, based on his study of the books of Daniel and Revelation, predicted the reestablishment of Israel as a nation over 220 years before it happened.

2. David Reagan recently recounted a story regarding C.I. Scofield. Based on Ezekiel 38-39, in 1909 Scofield wrote that someday a coalition led by Russia would invade Israel. Some criticized him because at the time Russia was a Christian nation and Israel did not exist. Now, however, current events tell us that such an invasion is a distinct possibility.

3. For years, prophecy watchers said Turkey, a friend of Israel not that long ago, would someday turn against God’s people. They said this based on Ezekiel 38-39. And it has happened in just the past ten years.

I could site many more examples of how a literal understanding of biblical prophecy has enabled prophecy watchers to know what the newspapers would report years in advance. But even more importantly, understanding what the Bible says about the news of today/tomorrow reassures us that God is in control as we watch events unfold just as He said would happen during the last days.

Because we live in biblical times of the end, those who proclaim God’s Word must not keep silent regarding the signs that point to Jesus’ soon appearing and the start of the tribulation period.

Below are a couple reasons why this is so essential!

While on earth, Jesus chastised the religious leaders of the day for not recognizing the numerous signs that their Messiah stood in their midst. In Matthew 16:1-4 we read:

And the Pharisees and Sadducees came, and to test him they asked him to show them a sign from heaven. He answered them, “When it is evening, you say, ‘It will be fair weather, for the sky is red.’ And in the morning, ‘It will be stormy today, for the sky is red and threatening.’ You know how to interpret the appearance of the sky, but you cannot interpret the signs of the times. An evil and adulterous generation seeks for a sign, but no sign will be given to it except the sign of Jonah.” So he left them and departed.

Just like the Pharisees and Sadducees of Jesus’ day, many of those in places of spiritual leadership today dismiss the many and varied signs of Jesus’ soon return. I believe that Jesus’ message to pastors and teachers who today dismiss the significance of the reemergence of the nation of Israel would be quite similar to how He addressed the religious leaders of His day. Would He not also scold them for failing to recognize the signs of His Second Coming so clearly laid out in Scripture?

Like the religious leaders in Jesus’ day, they scoff at the signs we present and as a result they may not awake until the ultimate sign of the rapture happens.

There’s also an assumption among those who criticize those of us who recognize the signs of Jesus’ return that we seek to scare people rather than encourage them. Such is not the case. The state of our world lets us assure the saints that they can look up in eager anticipation of Jesus’ imminent appearing (Luke 21:28). The disturbing events of our day signal the nearness of Jesus’ appearing to take us to the place He’s now preparing for us (John 14:1-3). What an amazing and joyful expectation!!

The signs of the last days should encourage our hearts even as we watch the world race toward the seven-year tribulation (1 Thess. 4:18; 5:11). Jesus is coming for us before the terrible day of the Lord (1 Thess. 5:9-10).

There’s a phrase in Jesus’ parable in Matthew 24:45-50 that the Lord keeps bringing to my mind as a way of prompting me to write about it. The words appear in verse 45 where Jesus asks, “Who then is the faithful and wise servant, whom his master has set over his household, to give them their food at the proper time?” (Emphasis mine)

The Greek word for “proper time” is kairos, which denotes an opportune or seasonable time. The word does not depict time on a clock, but rather the appropriate occasion or opportunity for something to take place. The current season of Jesus’ soon appearing calls for the inclusion of biblical prophecy in the diet that spiritual leaders provide to those under their care.

The “faithful and wise servant,” therefore, is the one who watches for the coming of “the Son of Man” (v. 44) and as the signs multiply regarding the nearness of his Lord’s return, he adjusts the “food” he sets before those whom he serves so that it corresponds with the nearness of Jesus’ return.

I interpret Jesus’ words here as a warning that those of us who today minister God’s Word to others have a particular responsibility to instruct others about the Lord’s soon return and warn them regarding the soon start of the tribulation period. I believe Jesus’ parable, recorded in Matthew 24:45-50, strongly cautions Bible-believing pastors and teachers against repeating the error of the Pharisees and Sadducees (see Matt. 16:1-4) who did not recognize their Messiah despite the many ways He fulfilled Old Testament Scripture.

In centuries past, it was enough to emphasize the Gospel past and present with a light emphasis on the future tense of the Gospel. We revere great preachers such as Charles Spurgeon for his clarity on the good news of salvation and we very much need his razor-sharp biblical insight into God’s grace and eternal security today.

However, along with Spurgeon-like insight into God’s steadfast love and mercy, we also need sound teaching on future things. So many pastors either ignore the signs of the end times or cloak biblical prophecies under a mysterious veil of allegory so that those texts have no relevance to us today. They treat biblical prophecy as a code, especially the book of Revelation, that only they can fully understand. In the end, their message lacks any comforting value for those of us in the twenty-first century.

Those who dismiss 90% of the book of Revelation as allegory should not expect those to whom they minister to find even a smidgen’s worth of encouragement in remaining 10%. That’s because such an approach places the rest of John’s message under a shroud of uncertainty.

For example, if the apostle’s description of the New Jerusalem is not a physical one, but only symbolical pertaining to another reality, how can one have any confidence in John’s other descriptions of the eternal state in Revelation 21-22? How can we trust the precious words of Revelation 21:4 if other key promises contained in these chapters are allegories subject to the varied interpretation of others?

The bottom line is this: we are not free to interpret the book of Revelation anyway we please and expect that to inspire hope in those who hear or relieve their fears.

Several varied prophetic schemes have arisen from allegorical ways of looking at the book of Revelation. If words don’t mean what they appear to mean, how do we know which one of them is correct? Not only that, a wide variance of opinion exists among them as to what is literal and symbolical. With the use of allegory, we have no objective basis to know what a text really means.

God’s inspiration of His Word applies to the very words of the prophetic texts of the Bible, to the intent of the human author. The Lord does not give us license to change to meaning of a text so that it has no relevance whatsoever to the words we see in front of us. Jesus warned against such allegorical interpretations of the last book of the Bible in Revelation 22:18-19. Do not symbolical understandings of Revelation take “away from the words of this book of prophecy?” Yes, they certainly do.

I suspect many will scoff at me for writing these things, but I must write what I believe the Lord lays on my heart. I know that we live in biblical times, the season of Jesus’ return and although I may not get everything totally correct, I am persuaded of the truth of Scripture and that Jesus is coming for His church in the near future.

Jesus said, “Heaven and earth will pass away, but my words will not pass away” (Matt. 24:35). He spoke those words after talking about the tribulation and the signs of His return to earth. As we watch the precursors to these tribulation events erupt all around us, how can we conclude anything else apart from the fact that we live in the last days of human history?

If you do not yet know the Lord as your Savior, please see my previous post where after comparing the Great Reset with the Great Renewal, I explain how you can become a child of God.

What are the 7 Dispensations?

What are the 7 Dispensations? A Bible Study by Jack Kelley I’ve been answering questions…