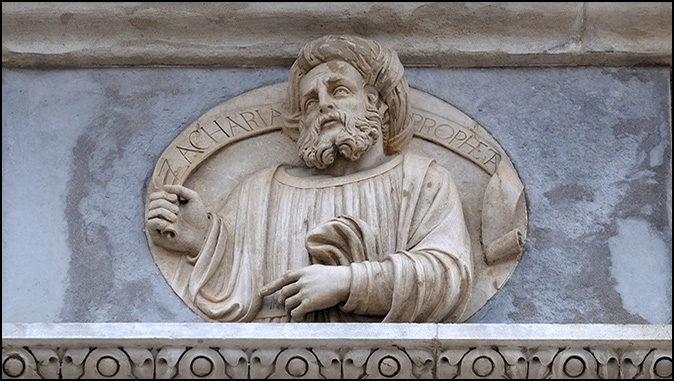 The End Times According To Zechariah – Part 1
By Jack Kelley

Zechariah assumed his role as a prophet in 520 BC, a few years after Israel’s return from the 70 year Babylonian captivity. The first half of his book describes eight visions that all came to him on a single night, February 15, 519 BC. Then there’s a short interlude where he relates the Lord’s answers to questions the Jews had about their current situation. Chapters 9-14 were written nearly 40 years later. 9-11 deal mostly with prophecies for the times leading up to and including the Lord’s first coming, and 12-14 focus on the End of the Age. These final three chapters are the object of our interest because they describe the End Times According to Zechariah.

Chapter 12…Jerusalem’s Enemies to Be Destroyed

This is the word of the LORD concerning Israel. The LORD, who stretches out the heavens, who lays the foundation of the earth, and who forms the spirit of man within him, declares: “I am going to make Jerusalem a cup that sends all the surrounding peoples reeling. Judah will be besieged as well as Jerusalem. On that day, when all the nations of the earth are gathered against her, I will make Jerusalem an immovable rock for all the nations. All who try to move it will injure themselves. On that day I will strike every horse with panic and its rider with madness,” declares the LORD. “I will keep a watchful eye over the house of Judah, but I will blind all the horses of the nations. Then the leaders of Judah will say in their hearts, ‘The people of Jerusalem are strong, because the LORD Almighty is their God.’ (Zech 12:1-5)

In case there’s any doubt about Who’s speaking, the Writer identifies Himself as the One Who stretches out the Heavens, lays the foundation of Earth, and forms the spirit of man. The fact that these verbs are all in the present tense indicates that this is an ongoing effort.

Notice the two separate thoughts here.  First the Lord says He’s going to send all the surrounding peoples reeling.  I believe this is a reference to the Psalm 83 and Isaiah 17 battles that only involve Israel’s next door neighbors and will set the stage for Ezekiel 38, the battle that will reawaken Israel to the Lord’s presence.  These battles will take place before Daniel’s 70th Week begins.  Later, when all the nations of the earth are gathered against Israel, He will show His ultimate strength in the battle we call Armageddon. This battle takes place at the end of Daniels 70th Week.

“On that day I will make the leaders of Judah like a firepot in a woodpile, like a flaming torch among sheaves. They will consume right and left all the surrounding peoples, but Jerusalem will remain intact in her place. The LORD will save the dwellings of Judah first, so that the honor of the house of David and of Jerusalem’s inhabitants may not be greater than that of Judah. On that day the LORD will shield those who live in Jerusalem, so that the feeblest among them will be like David, and the house of David will be like God, like the Angel of the LORD going before them. On that day I will set out to destroy all the nations that attack Jerusalem.” (Zech 12:6-9)

Jerusalem will not fall completely and the surrounding areas of Judah will be spared as well, but by the time it’s over Jerusalem will be rescued and all the attacking nations will be destroyed.

Mourning for the One They Pierced

But before the final battle begins, the Lord will send His Spirit of Grace, and the eyes of the spiritually blind will be opened, and they’ll behold their Messiah, Jesus, the One they crucified. They’ll all grieve bitterly, as if for a firstborn son, from the royal line of David, to the rest of Judah, represented by Solomon’s brother Nathan, to the priests of Levi and the other Levite families under Shimei, and to all the tribes and clans of Israel. It’s the National Awakening into a New Covenant relationship as foretold in Jeremiah 31:31, and both civil and religious authorities will lead the way.

By the way, there are two un-translated letters in the Hebrew text following the phrase “look upon me” in Zechariah 12:10. The two letters are the aleph and the tau, the first and last letters of the Hebrew alphabet. Their better-known equivalents are the alpha and the omega, the first and last letters of the Greek alphabet, used to describe the Father in Rev. 1:8 and 21:6 and the Son in Rev. 22:13. The same two un-translated letters appear in the Hebrew text of Genesis 1:1 following the phrase “In the beginning God…” Are these clues that God placed there to identify Jesus as the Messiah, and to confirm His role as our Creator as well as our Redeemer? Does the use of the phrase “alpha and omega” at opposite ends of The Revelation and attributed first to the Father and then to the Son mean that they are One as Jesus claimed in John 10:30? It certainly seems so.

“On that day a fountain will be opened to the house of David and the inhabitants of Jerusalem, to cleanse them from sin and impurity.

“On that day, I will banish the names of the idols from the land, and they will be remembered no more,” declares the LORD Almighty. “I will remove both the prophets and the spirit of impurity from the land. And if anyone still prophesies, his father and mother, to whom he was born, will say to him, ‘You must die, because you have told lies in the LORD’s name.’ When he prophesies, his own parents will stab him.”

“On that day every prophet will be ashamed of his prophetic vision. He will not put on a prophet’s garment of hair in order to deceive. He will say, ‘I am not a prophet. I am a farmer; the land has been my livelihood since my youth.’ If someone asks him, ‘What are these wounds on your body?’ he will answer, ‘The wounds I was given at the house of my friends.’” (Zech 13:1-6)

As they finally see and accept Jesus as their Messiah, the blood He shed on the cross will wash them clean, and the life He gave will ransom them, just as it has us. The Angel Gabriel told Daniel that six things would be accomplished during Israel’s final 490 years, and one of them, sealing up vision and prophecy, is accomplished here. (Daniel 9:24) No longer will God use prophets to communicate with man, He’ll soon be dwelling among them again, and will deliver His Word personally. Anyone claiming to be a prophet will be executed by his own friends and family if necessary, to avoid offending the Lord.

The Shepherd Struck, the Sheep Scattered

“Awake, O sword, against my shepherd, against the man who is close to me!” declares the LORD Almighty. “Strike the shepherd, and the sheep will be scattered, and I will turn my hand against the little ones. In the whole land,” declares the LORD, “two-thirds will be struck down and perish; yet one-third will be left in it. This third I will bring into the fire; I will refine them like silver and test them like gold. They will call on my name and I will answer them; I will say, ‘They are my people,’ and they will say, ‘The LORD is our God.’” (Zech 13:7-9)

Here’s an overview connecting the Lord’s first and second coming. He quoted from this passage on the night of his betrayal. (Matt. 26:31) Today many well meaning but scripturally inept Christians go running through Israel telling people that they’d better come to Jesus because two thirds of them are about to die in the coming Great Tribulation. As far as I know, not one convert has resulted from this misuse of Scripture. Even a casual reading shows that two thirds are struck down first and it’s the remaining third that the Lord brings into the refining fire, a euphemism for the Great Tribulation.

By most accounts, there were 9 million Jews alive in the days before World War 2. Six million, two thirds, perished in Hitler’s extermination programs. Many of those left alive at the end of the war came to the newly re-born Nation of Israel and became its first residents. After the Battle of Ezekiel 38-39, the Lord will gather the rest of them, not leaving any behind. This is the remaining third that will experience the Great Tribulation and upon whom He will pour out His Spirit. (Ezek. 39:28-29) It is this remaining third, the remnant of Israel, who will call on His name and be saved.

“I will show wonders in the heavens and on the earth, blood and fire and billows of smoke. The sun will be turned to darkness and the moon to blood before the coming of the great and dreadful day of the LORD.”

“And everyone who calls on the name of the LORD will be saved; for on Mount Zion and in Jerusalem there will be deliverance, as the LORD has said, among the survivors whom the LORD calls.” (Joel 2:28-32)

Next time we’ll cover chapter 14, the day the Lord arrives. See you then.