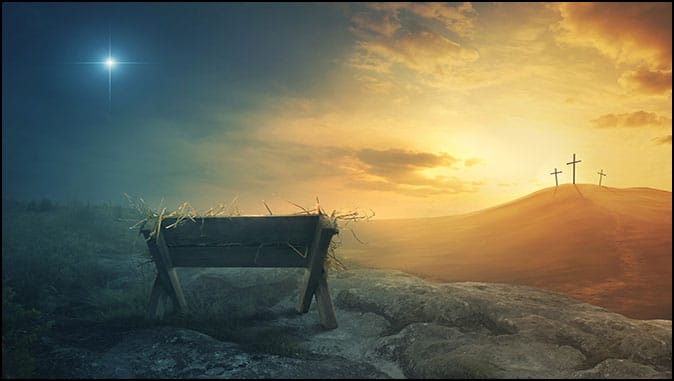 The Dragon and the Manger
By Hal Lindsey

Dragons make fine fiction. In the old stories, heroes become heroes while battling dragons. Those dragons aren’t real. But Revelation 12 depicts something it calls a dragon — something very real. It uses some of the most startling and dramatic imagery anywhere in literature.

“And a great sign appeared in heaven: a woman clothed with the sun, and the moon under her feet, and on her head a crown of twelve stars; and she was with child; and she cried out, being in labor and in pain to give birth. And another sign appeared in heaven: and behold, a great red dragon having seven heads and ten horns, and on his heads were seven diadems. And his tail swept away a third of the stars of heaven, and threw them to the earth. And the dragon stood before the woman who was about to give birth, so that when she gave birth he might devour her child.” (Revelation 12:1-4 NASB)

Before we identify the characters, stop and think about the horror of this picture. A woman is “in labor and in pain to give birth.” That means the child is about to appear. During birth and as a newborn, he is and will be highly vulnerable. While in labor, the woman is highly vulnerable. Childbirth is a glorious thing, but the height of labor is a terrible stage. John 16:21 says, “Whenever a woman is in travail she has sorrow, because her hour has come…” (NASB)

She’s in pain. The process can seem unending — wave after wave, the contractions grow more intense and each time with less respite before the next one hits. Her back aches. Her whole body hurts. John 16:21 goes on to say, “…but when she gives birth to the child, she remembers the anguish no more, for joy that a child has been born into the world.” (NASB)

She still remembers that there was pain, but the memories almost immediately begin to dim relative to the joy of the child. Often with a second child, the woman will say, “I had forgotten how much this hurts!” When she’s in the throes of labor, she “has sorrow.” Many Bible translations use the word “pain” here, but the actual Greek is best translated “sorrow.” That sorrow includes pain, but it also includes her utter fatigue and the feelings of hopelessness engendered by exhaustion and agony.

Later she will feel great joy, but this is not that point. In Revelation 12, the pain is at its peak. The sorrow seems ceaseless. It is the woman’s most vulnerable moment. That’s when the monster shows up.

Revelation 12:9 identifies the dragon as Satan. Verse 5 identifies the Child as Jesus. The woman represents the nation of Israel. Genesis 37:9-10 identify the sun and moon and 12 stars as Jacob (whom God renamed Israel), his wife Rachel, and Jacob’s 12 sons who become the 12 tribes of Israel. Jesus was born out of that nation.

Before the birth of Jesus, Satan used men like Pharoah, Haman, and Antiochus in attempts to destroy the mother before she could bear the Child. He tried using whole nations such as the Amalekites, Philistines, Egyptians, and Babylonians. When Jesus was born, the dragon induced Herod to kill babies across the region in an attempt to murder the Christ child.

Bible prophecy requires the existence of the nation of Israel at the time of Christ’s second coming. Again, the dragon and his minions try to make that impossible by doing everything they can to destroy Israel. Iran keeps promising to wipe Israel off the map. Eighty years ago, Hitler’s attempt at genocide resulted in the deaths of six million Jews. But God used the holocaust to help create modern Israel.

Satan loses. That’s true in history. It’s true in the Christmas story. And it’s true in our stories as Christians. That is the reason Christian art so often depicts a defeated dragon at the feet of Jesus — just one of many reasons to rejoice at Christmas.

The Sower And The Seed