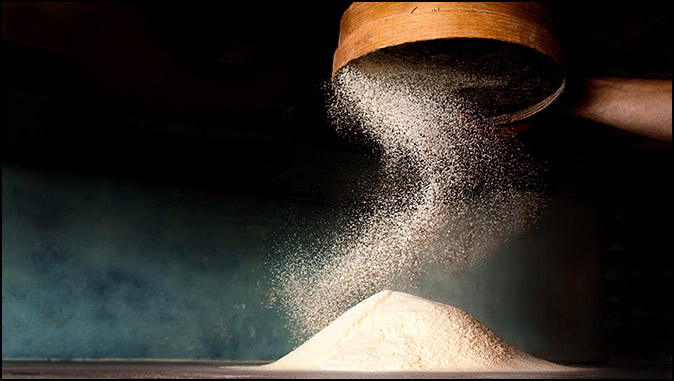 “Simon, Simon, Satan has asked to sift you as wheat. But I have prayed for you, Simon, that your faith may not fail. And when you have turned back, strengthen your brothers.” – (Luke 22:31-32)

In the Lord’s first sentence the word translated “you” is plural, but He changed to the singular in the second and third. This means that all the disciples would be sifted when the Lord was arrested, in fulfillment of Zechariah 13:7, “Strike the shepherd and the sheep will be scattered.” But He was choosing Peter to keep the group together and focused after He was gone.

From watching him throughout the 3 1/2 years he spent with the Lord, we can tell that Peter was a fearless, decisive guy, used to taking charge and making things happen. These are qualities we admire in a man and are necessary for success as an independent businessman such as Peter. Some have even described him as head strong, and a bit of a loose cannon. Luke’s account of Peter’s calling shows him to be a man given to strong and immediate reactions. After Jesus borrowed Peter’s boat to use as a speaker’s platform, He had Peter go out and let down his nets for a catch.

Complaining that they hadn’t caught anything all the previous night, Peter said he would do it, but only because Jesus told him to. Of course, they came up with a net full. Peter’s immediate reaction was to say, “Go away from me Lord, I am a sinful man.” This after hearing one teaching. (Luke 5:1-8)

When Jesus came to the disciples walking on the water, Peter was the one who got out of the boat to try it too, and almost drowned. (Matt. 14:25-31) Peter was the first to declare that Jesus was the son of God. (Matt. 16:16)

When Jesus said they were going to Jerusalem where He would be arrested and put to death, Peter took him aside and began to rebuke him. “Never, Lord!” he said. “This shall never happen to you!” Jesus turned and said to Peter, “Get behind me, Satan! You are a stumbling block to me; you do not have in mind the things of God, but the things of men.” Then Jesus said to his disciples, “If anyone would come after me, he must deny himself and take up his cross and follow me.” – (Matt. 16:22-24)

At the Last Supper, when Jesus tried to wash Peter’s feet, he at first refused to allow it, then asked for a complete bath. With Peter it was all or nothing. (John 13:6-9)

And finally, in the Garden later that evening, he drew a sword and stepped between Jesus and the armed soldiers who had come to arrest Him. Swinging his sword at them, he cut off the ear of the High Priest’s servant, Malchus. He was clearly ready to take them all on in defense of the Lord. (John 18:10)

But the Lord rebuked him and with the touch of His hand, healed the servants’ ear. (Luke 22:51) Then He said, “Do you think I cannot call on My Father and He will at once put at my disposal more than 12 legions of angels? But how then would the Scriptures be fulfilled that say it must happen this way?” – (Matt. 26:53-54)

When you read all the accounts of the Lord’s arrest, you get a glimpse of both His power and His resolve. John records that simply by identifying Himself, He put all the soldiers on their backs, (John 18:4-6) and from Matthew we learn that at His command the angelic host would rush to his defense.

A Roman legion consisted of 6,000 soldiers, and while it was a formidable force, it was merely a human one. Imagine what 72,000 angelic warriors could do. He could have easily subdued the arresting party and thrown the Romans out of His land in the bargain, but that’s not what He came to do. When I consider the power available to Him and yet the meekness with which He submitted to those comparatively puny leaders I’m driven to my knees in awe and gratitude.

As Paul would later write, here was One who was in His very nature God. And yet He made Himself nothing, adopting instead the nature of a humble, obedient servant. As such, He agreed to be executed in the manner reserved for the basest of criminals. (Phil 2:6-8) And Peter would add, it was not for any crime He had committed, but to pay the penalty for ours. (1 Peter 1:18-19 & 3:18)

But something had to be done about Peter. So accustomed was he to coming to the rescue that he couldn’t imagine just standing by, doing nothing, while the Lord surrendered His perfect life. And it’s my guess that even the Lord’s prediction of his denial served to strengthen Peter’s resolve that as long as he could prevent it, the Lord would not fall into any danger. Earlier the Lord had rebuked him for not seeing the big picture, not having in mind the things of God but the things of man, but it hadn’t been enough. The Lord’s second rebuke, in the garden, had backed Peter down temporarily, but more had to be done.

It wasn’t as if Peter could thwart the will of God, but he could make accomplishing it a lot messier, perhaps even wasting his own life in the process. The Lord had more in store for Peter that required keeping him alive, but his self determining ways would not be helpful with that either. Peter had to be brought to the end of himself, in order to be useful to God. He had to be made weak in order for the Lord to show Himself strong, and so Satan got permission to “sift him as wheat”, just as he had earlier received permission to afflict Job in order to accomplish God’s will. Like it is with wheat, the sifting of a man is designed to remove his impurities, and that’s what the Lord wanted for Peter. Satan was simply His agent for change.

Peter’s sifting came in the form of his public denial of the Lord. I can’t begin to imagine how humiliating it must have been for him when he heard that rooster crow, and remembered the Lord’s earlier prophecy of his denial. He’d always been so brave, so dauntless, but suddenly even the accusation of a servant girl, the least powerful of all people, had intimidated him into denial, and just at the moment of what he perceived to be the Lord’s greatest need. I can even see him blaming himself for the Lord’s death, much as you and I have done when we finally came to the gut level realization that it was our sin that put Him on the cross, not just humanity’s, but ours.

Peter had always been the one the others looked to for strength, but when it really counted he’d been weak, even cowardly. For the rest of his life and through out the entire Church Age when people thought of Peter, they’d remember that moment. It would define his life.

But Romans 8:28 does apply to all the situations in our lives. God is working everything together for the good of those who love Him. For at that moment Peter was born again, made new in the attitude of his mind. The fact becomes achingly clear in the passage we call Peter’s reinstatement. It’s found in John 21:15-19. You really have to consult your Greek lexicon to understand it because the English translations miss the point entirely. Here’s the conversation.

When they had finished eating, Jesus said to Simon Peter, “Simon son of John, do you truly love me more than these?”
“Yes, Lord,” he said, “you know that I love you.”
Jesus said, “Feed my lambs.”

Again Jesus said, “Simon son of John, do you truly love me?”
He answered, “Yes, Lord, you know that I love you.”
Jesus said, “Take care of my sheep.”

Jesus said, “Feed my sheep. I tell you the truth, when you were younger you dressed yourself and went where you wanted; but when you are old you will stretch out your hands, and someone else will dress you and lead you where you do not want to go.” Jesus said this to indicate the kind of death by which Peter would glorify God. Then he said to him, “Follow me!”

The key to understanding is in the word “love”. In the Greek John used a different word in the Lord’s questions than he did in Peters’ responses. In his first two questions, the Lord’s word for love is agapeo, which describes an all encompassing love that puts the needs and well being of the object of one’s love above everything, including one’s own needs, and does so irrespective of the object’s response. It’s the love he has for us, demonstrated on the cross.

But in response, Peter used a different word, phileo, which means the affection one brother would have for another. Finally, in His third question, the Lord substituted Peter’s word for his and they were able to agree. Both knew that Peter’s new understanding of himself would not permit him to brashly proclaim the extreme love that Jesus had asked for, and the Lord agreed that the level of love Peter could offer was sufficient. Peter’s re-birth was successful and he could now be restored to his leadership role.

From that point on the change in Peter is remarkable. His sermons in Acts 2 & 3 could never have been possible had he not become submissive to the leading of the Holy Spirit within him, and throughout the Book of Acts it’s obvious that he was a changed man. And perhaps most important of all is the example his life provides for those of us who have experienced similar humbling and even humiliating failures on our way to becoming useful to the Lord.

Many great men have undergone trials designed to mold them for service to the Lord. Abraham was asked to send Ishmael away, and then to sacrifice Isaac. Moses endured 40 years in the desert while the reputation he had built in Pharaoh’s court as a Prince of Egypt was forgotten. After defeating the 400 prophets of Baal in one of the Bible’s greatest public displays of faith, Elijah was chased into the desert by the Phoenician woman Jezebel. Paul suffered through and was healed from regular beatings.

But as dramatic as their stories are, it’s Peter who showed us that the very personality traits most admired by the world can be a great handicap when we undertake the Lord’s work, and often our only hope in becoming effective is to be divested of them. It’s a painful experience. Some are defeated by it and leave the ministry, but those who survive learn that the Lord’s response to Paul’s complaint is true true for all of us. “My strength is made perfect in your weakness.” (2 Cor. 12:9) Selah.