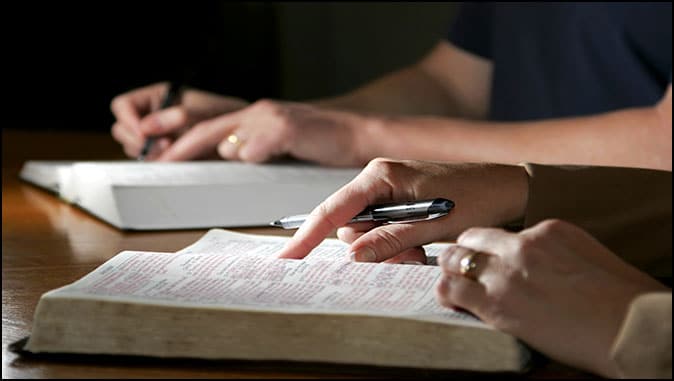 As a child, I loved AWANA and grew up with its motto verse hanging on the wall of my bedroom. It read, “Study to show thyself approved unto God, a workman that needeth not to be ashamed, rightly dividing the word of truth” (2 Tim. 2:15, KJV).

The Greek word for “rightly dividing” literally means to “cut straight” with the implication of interpreting Scripture accurately. The English Standard Version translates the phrase as “rightly handling the word of truth.” This has been my goal since that time, but I do not claim perfection.

Over the many years, I have observed that much doctrinal error has arisen because of a failure to heed the instruction Paul gives us in 2 Timothy 2:15. Many fail to handle Scripture accurately because they do not make proper distinctions in their interpretation of it. They do this by either ignoring the overall context of a passage, failing to recognize the audience to whom the author is addressing, ignoring the dispensation to which the text refers, or by way of all of the above. As a result, they fall short of accurately handling God’s Word; they do not cut a straight path through it as prescribed by 2 Timothy 2:15.

Here are some examples of what happens when teachers combine truths that the Bible separates.

The Combining of the Church’s Mission with its Hope

If you attend a Bible-believing church for at least a year, you will hear one sermon on the Great Commission (Matt. 28:18-20), if not two or three. The Bible is clear that Jesus tasked His followers with being a witness to the nations by proclaiming the Gospel and by making disciples by teaching God’s Word to those follow Jesus.

A problem, however, arises when teachers and pastors confuse the mission of the church with its hope. The most egregious example of this is C. Porter Wagner. He authored eighty books and served as the Professor of Church Growth at the Fuller Theological Seminary’s School of World Missions until his retirement in 2001. Sadly, he propagated the false teaching of Dominion Theology, which teaches that the church will succeed in bringing the entire world to saving faith in Christ and by itself bring in the millennium before Jesus returns to earth. I wrote about this doctrinal error in an earlier post, The Five Dangerous Errors of the New Apostolic Reformation.

Wagner has greatly impacted churches today, even those that reject his end times theology. In many cases, they unwittingly combine the mission of the church with its hope. The first subtle indication of this happens when teachers take verses that refer to the millennium and apply them to the future success of missionary efforts. One example of this is Habakkuk 2:14, “For the earth will be filled with the knowledge of the glory of the Lord, / as the water cover the sea.” This total covering of the planet with the Lord’s glory happens during Jesus’ reign over the nations, not during the church age. The same is true of Psalm 46:10, which also refers to the millennium rather than missionary efforts in our current day.

Others error by making Daniel 2:44 a reference to the church age instead of the beginning of the millennium where it belongs. This confusion carries with it the implication that the church is God’s future kingdom that strikes down the kingdoms of the world with the spread of the Gospel. Those who deny the future thousand-year reign of Jesus often interpret this as a prophecy regarding the rock of Daniel 2 as the Holy Spirit descending on the Day of Pentecost.

Please know that I strongly support home and foreign missions and have done so all of my life. Missionaries have had a profound and lasting impact on my life. Furthermore, in this late hour, it’s imperative that we share the Gospel with as many people as possible. I am not at all suggesting that we ignore the calling of the church to preach the Gospel and teach people the word of God.

However, when the mission of the church becomes its ultimate hope as we see happening today, much doctrinal error ensues and a Gospel devoid of its “blessed hope” becomes the the norm rather than the exception.

The Combining of Government and Individual Saint Responsibilities

Does the Bible assign identical responsibilities to New Testament saints and those in government authority?

Most evangelicals today would answer “yes” to that question. Many politicians, despite their limited knowledge of Scripture and rejection of its overall message, often quote Bible verses in a manner that assumes God has identical expectations of governments as He does of individual Christians.

God’s Word tells us that the primary role of government during the church age is to punish those who break the law and in so doing protect its citizens (Rom. 13:1-7). God entrusts human governments with the responsibility of keeping its people safe from those who break the law or would cause them harm. Government leaders do so by enforcing laws so that those guilty of breaking its law receive just punishment while those who obey its statutes enjoy their protection (13:4).

National borders do not represent the evil invention of wayward humanity; both sovereign nations and its borders originate in God’s sovereign purposes plan for humanity (see Acts 17:26). The Lord instituted human governments as well as national borders and He holds those in authority over the various nations responsible for keeping their citizens safe within those borders.

As followers of Christ, we have a much different role than that of the government. Jesus summarized our responsibility in John 13:34-35, “A new commandment I give to you, that you love one another: just as I have loved you, you also are to love one another. By this all people will know that you are my disciples, if you have love for one another.” Jesus did not give this command to human government; He gave it to His followers. The same is true of Jesus’ parable of the Good Samaritan.

The instruction for New Testament saints “to show hospitality to strangers” (Heb. 13:1) does not suggest that governments should welcome those who come into their nation illegally. The leaders of nations have a much, much different responsibility than believers, one that involves protecting it citizens and punishing those who break its laws.

For more information on this confusion of roles between the government and individual saints, click here.

The Combining of the Church and Israel

Replacement theology falsely claims that God rejected the people of Israel when they spurned their Messiah and replaced the nation with the church. Thus, the promises and covenants the Lord made with Israel now find their fulfillment in the church, albeit in a spiritual rather than physical sense.

This popular, yet erroneous teaching, fails to distinguish between Israel and the church as does Paul in Romans 11. In the first two verses, the apostle negates the idea that God has rejected Israel. In the rest of the chapter, he explains why the Lord set aside Israel for the time being although many Jews have come to faith and joined the church.

In Romans 11:25-36, Paul prophesies of a time when Israel will return to the Lord, which is also what Zechariah wrote about in 12:10 to 13:1. The key verse is 11:29, “For the gifts and the calling of God are irrevocable.” In Ezekiel 36:22-38, the Lord tells us that Israel’s future restoration vindicates His holiness. For more on this topic, click here.

This is so much more than just a matter of meaningless semantics. Those who miss the distinction between the church and Israel do not understand a key purpose of the tribulation, which is to bring Israel to repentance and salvation. Instead, they interpret the book of Revelation as allegory, which leads to many other errors as well as false hopes for the day in which we live.

The Combining of the Rapture with the Second Coming

During the past two or three decades especially, pastors and teachers have failed to “rightly” divide Scripture by claiming that the Rapture and the Second Coming are the same event. They are not.

The biblical descriptions of the Rapture and Second Coming contain many significant differences that make it impossible to reconcile them into one event. They cannot happen at the same time.

The resurrection of those who have died in Christ confirms that they cannot be the same event. The resurrection of the saints happens first in the event Paul describes in 1 Thessalonians 4:13-17 and 1 Corinthians 15:50-54. With the Second Coming, however, the resurrection of tribulation saints does not occur until after a lengthy sequence of events (Rev. 19:11-20:4), perhaps not until several days later.

This is just one of many distinguishing and significant differences that exist in passages describing the Rapture versus those of the Second Coming.

Do These Things Really Matter?

“What’s the big deal?” you might be asking at this point, “Are these distinctions really that critical?” I would argue that they are extremely important. Here’s why:

The combining of the church’s mission with its hope has led to the current prominence of the New Apostolic Reformation doctrinal error that falsely teaches that the church will bring the entire world to Jesus and bring in the millennium without Him. The Bible does not teach this; it’s a serious false teaching.

The combining of the government’s responsibility with that of individual believers often arises from the previous error. Once the mission of the church becomes its ultimate goal, believers caught up in this confusion often insist that those running for office act in a way that facilitates winning people to Christ because of their niceness versus an evaluation of their agenda.

The combining of the church with Israel has caused many today to discard biblical prophecies regarding Jesus’ thousand-year reign on the earth, which also furthers the prominence of the church’s mission over its hope in Jesus’ appearing. Through the use of allegory, these amillennialists retrofit interpretations of prophetic passages that are foreign to the intent of the authors. This sadly causes believers to miss the many signs of the last days that abound in our world. They cannot see that the seven-year tribulation is approaching this world at warp speed.

The combining of the Rapture with the Second Coming takes the eyes of believers off the “blessed hope” of the Gospel at a time when it is needed the most. It facilitates hope in earthly outcomes rather than in eternal matters. Besides that, such confusion does not provide relief from the anxieties created by the perilous times in which we find ourselves.

So yes, these distinctions absolutely matter. The failure to “rightly” divide Scripture in these areas results in an earthbound perspective that tragically divorces our ultimate hope in Jesus’ appearing from the proclamation of the Gospel. These shortcomings lead to inordinate focus on the temporal things of this life versus eternal realities (see 2 Cor. 4:16-18).

Conversely, not only does rightly dividing God’s Word keep us from doctrinal error, it keeps us focused on Jesus’ soon appearing, an essential hope in an increasingly hostile world.

Is It Important That the Holy Spirit Is a Person?

Is It Important That the Holy Spirit Is a Person? By Dr. Matt Ayars President…

In Your Anger Do Not Sin

The Feast of Tabernacles