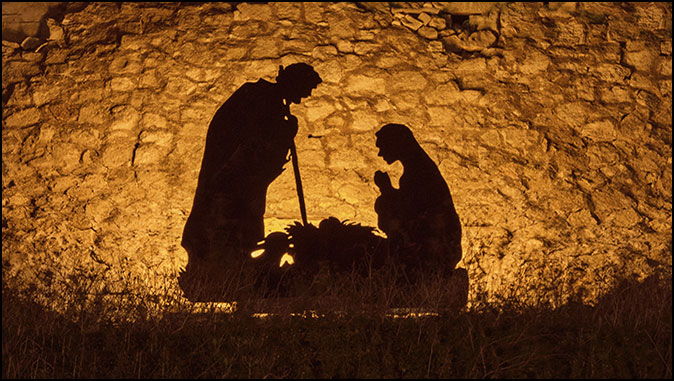 What Really Happened at Christmas?
A Bible Study by Jack Kelley

In the past I’ve explained why I believe Jesus probably was born sometime in September. If that’s the case then what really happened in December?  Is Christmas just the result of overlaying Christian beliefs on a formerly pagan holiday as some believe, or is there more to it?

To find the answer we begin with a look at the Jewish Feast of Hanukkah.   Maybe you’ve heard the story of Hanukkah, but if not here’s a brief summary.  In 165 BC, during the time of the Maccabean Revolt, the Jews recaptured their desecrated Temple from Syrian dictator Antiochus Epiphanes and undertook a rebuilding and cleansing process to make it fit for worship again. (Angry with the Jews and defiant toward God, Antiochus had captured the Temple, sacrificed a pig on the altar, and erected a statue of the Greek god Zeus in the Holy Place requiring everyone to worship it on pain of death. This outrageous act rendered the Temple unclean and became known as the Abomination of Desolation.)

Jewish tradition holds that when they prepared to cleanse the Temple to make it fit for use again, the priests could not find enough Holy Oil to keep the Temple Menorah, a large 7 branched oil lamp, lit for  the required 8 day purification ritual. They only had enough for one day.  But they went ahead in faith and God multiplied that small supply so that it lasted for the full eight days making the Temple Holy again.

Since then, this miracle has been commemorated in the Feast of Hanukkah, an eight day celebration that includes the use of a special 9 branched candlestick called a Hanukkiah, short for Hanukkah menorah. The Hanukkiah  has a single elevated branch, representing the available supply of oil, and 8 additional branches, one for each day of the purification ritual.  Each day of the celebration an additional candle is lit, always using the flame of the elevated candle, until on the final day all the candles are burning. This reminds them that the light for each day came from the single day’s supply of oil they began with.   Hanukkah is also referred to as the Festival of Lights for this reason.

By the way this Abomination of Desolation is an act destined to be repeated and will again trigger a revolt, this time involving the whole world.  When you see a Temple in Jerusalem you will know the time is near, and when you see the Abomination of Desolation standing in the Holy Place you will know that 3 1/2 years of the most terrible time man has ever known have begun (Matt 24:15-21). Whether you see this from Earth or Heaven will be determined by whether you’ve previously accepted the Lord’s death as payment for your sins.

As you know Hanukkah takes place around Christmas so I’m going to use the proximity of the two events to make what some would call an outrageous claim. I believe there’s a theological connection between Hanukkah and Christmas that does nothing less than state God’s position on the beginning of life.

In Happy Birthday Lord Jesus I demonstrated that in all probability John the Baptist was conceived in what would have been mid to late June on our calendar and born the following March.  John’s mother and father were Elizabeth  and Zechariah. According to Luke 1:36 Mary conceived in the 6th month of Elizabeth’s pregnancy. That means that our Lord was conceived in late December and born the following September.  Because the calendars are different the exact dates vary from year to year, but each year Hanukkah takes place in close proximity to Christmas.  Jesus is called “the True Light that gives light to every man” (John 1:9).  Was Jesus, “The Light of the World” conceived during the Festival of Lights?  Are we unknowingly celebrating His conception at Christmas instead of His birth?  If that’s the case do you realize what God is telling us?

When Did Christmas Begin?

The fact that Jesus is God incarnate is amply supported in Scripture.  But when did He become God and why did He choose to come into the world the way He did? Jeremiah 1:4-5, Psalm 51:5 and 139:13-16 all allude to the fact that God knew us from the moment of our conception.  He knew all the details of our lives and considered us human from that time. To merely be with us in human form Jesus could have arrived as a fully grown man but He came as an embryo because that’s the way all humans begin their life.

Christmas began at the moment of divine conception. God the Father planned it, God the Holy Spirit planted the fertile seed in Mary, and at that moment God the Son took on human form in the womb of a virgin. From that first moment of conception Jesus was very much alive, very much human, very much God.  He didn’t become the Incarnate God somewhere along the path of His life, or even when He emerged from Mary’s womb. He had been such from the moment of conception (Luke 1:35). God could not have made any stronger statement about the sanctity of pre-born life.

As a poor, unwed teen-aged girl about to be ostracized from family and society, Mary met all the modern criteria for a therapeutic abortion. But had she and Joseph sought one, it would have been just as much the murder of the Messiah as was His death on the cross 33 years later.  So the life of the Christ child really did begin at Christmas. And now you know the adult version of the Christmas story.

Be Perfect, As Your Heavenly Father Is Perfect

Be Perfect, As Your Heavenly Father Is Perfect A Bible Study by Jack Kelley Matt.…

The Sermon On the Mount, Continued

The Sermon On the Mount, Continued A Bible Study by Jack Kelley In our study…

The Sermon On The Mount, Conclusion

The Sermon On The Mount, Conclusion A Bible Study by Jack Kelley The final installment…

Contrasting Covenants and Confirmations – Part 1 By Randy Nettles Terah, the father of Abram…

Shine On! By Randy Nettles “In the beginning, God created the heavens and the earth.…