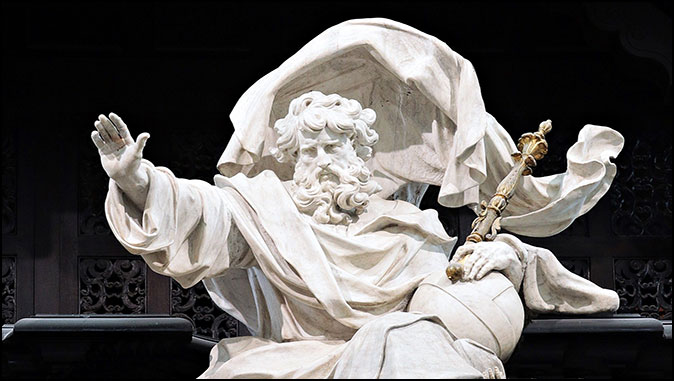 Proving the Existence of God
By Jack Kelley

When asked how he could be so certain that God exists, one great theologian responded with a 2 word answer, “The Jew.” The continued survival of the Jewish people in spite of numerous and concerted efforts to exterminate them unequivocally demonstrates God’s existence, His presence in the world and His involvement in the affairs of man.

First let’s understand that the Jewish people were chosen by God to accomplish four things:

Because He instilled in them a desire to be so meticulous in preserving His word, we have in the Old Testament a document that when compared to secular accounts of world history provides irrefutable evidence of God’s existence.

Is That You, God?

Let me put it this way. If someone came to you and claimed to be God, what would be the most convincing proof he could offer to convince you that he really was? Many people I’ve asked have responded that if he could tell them things no one could know they would be impressed enough to at least give him the benefit of the doubt. When I say “What if he told you things that haven’t happened yet? And then when the events he predicted came to pass just as he described them with 100% accuracy, would that persuade you?” Invariably the answer I get is “Yes.”

Well that’s exactly what God has done. Listen to His claim from Isaiah 42:8-9. “I am the Lord, that is my name! I will not give my glory to another or my praise to idols. See, the former things have taken place (what I told you would happen has happened) and new things I declare; before they spring into being I announce them to you.”

Of all the so-called Holy Writings, only the Bible authenticates itself like this. In fact God challenges anyone else claiming to be like Him to prove himself this way. “This is what the Lord says, Israel’s King and Redeemer, the Lord Almighty. I am the first and I am the last; apart from me there is no God. Who then is like me? Let him proclaim it. Let him declare and lay out before me what has happened since I established my ancient people and what is yet to come – yes. Let him foretell what will come” (Isaiah 44:6-7). If you want to be God, there’s a two-question qualification exam. First recount in detail everything that has happened in the past, and then predict everything that will happen in the future. By the way, the only acceptable score is 100%. (Deut 18:21-22)

Knowing The End From The Beginning

We call this means by which God authenticates Himself predictive prophecy. By most accounts the Bible is 30-40% predictive prophecy by volume. A lot of it has been fulfilled and is there waiting to be compared to history as evidence of God’s existence. Much more is being fulfilled right before our eyes through the Nation of Israel as irrefutable proof. But just for the purpose of illustration let me site 3 passages.

According to historical records, when Cyrus the Persian conquered Babylon in 535 BC, Daniel the prophet asked him to release the Jews who had been captive there for 70 years. “Why should I?” asked Cyrus. In response Daniel read him a passage from Isaiah written nearly 250 years earlier. In the passage Cyrus was mentioned by name, and the method by which he had just conquered Babylon was described in detail (Isaiah 45:1-7). This fulfilled prophecy persuaded Cyrus and he freed the Jews.

When Alexander the Great read Daniel’s vision of the Ram and the Goat (Daniel 8:1-8), he became convinced that the vision spoke of the way Greece had conquered Persia under his leadership, and from that time forward he afforded the Jews special treatment. Upon entering Jerusalem, Alexander bowed before the High Priest and spared the city. He appointed Jewish administrators over much of his kingdom, and it was in the city of Alexandria that a grandson of Alexander’s had the Old Testament translated into Greek so the world could read it. By the way Daniel had his vision over 200 years before Alexander was born.

The first 35 verses of Daniel 11 document in advance the history of the Middle East from the death of Alexander to the arrival of the Romans in such great detail that unbelievers have spent hundreds of years trying to prove that it was written after the fact. As a result Daniel is the most historically documented book in the entire Old Testament

World leaders have long known that the way to repress the people is to keep them ignorant. This principle was developed by Satan himself and is being used most effectively on our generation. In the early days of the church, he persuaded Gentile leaders to separate the church from its Jewish roots, ignore the Old Testament and jettison 4000 years of Jewish commentary on life in a covenant relationship with God. (As a result the Gentile world has spent much of the last 2000 years re-discovering principles of sanitation, health, and inter-personal relationships that Moses first wrote about in the wilderness.) During the Dark Ages the Bible was available only to monks in monasteries and the church itself became an instrument of incredible repression and persecution. In our century the Bible has been so thoroughly discredited by the introduction of the Documentary Hypothesis and Modern Rationalism into our seminaries that much of the Church no longer regards either Testament as being relevant to our times. And of course the elimination of even the mention of God’s name from our schools means that many in our current generation have never even seen a Bible and probably wouldn’t know where to find one, much less how to read it.

Even this was prophesied in Scripture: “The days are coming,” declares the Sovereign Lord, “when I will send a famine through the land – not a famine of food or a thirst for water, but a famine of hearing the words of the Lord.” (Amos 8:11). Never in the history of the world has spiritual ignorance been so prevalent. It’s remarkable when you think of it, because our current state of ignorance has been created only recently. Many of our great universities, like Harvard, Princeton and Yale were founded as seminaries that subscribed to a literal interpretation of God’s word. Our public school system began in churches, and the earliest primers, used to teach children to read, were adapted from the Gospel of John. Our nation’s departure from its Christian heritage has taken place in the span of just 2 generations.

But the evidence of predictive prophecy still remains. We haven’t burned our books yet, so all you have to do to convince yourself that God exists is to pick up a few of them. Get a Study Bible, a competent volume on world history, and a reference book or two such as the Complete Works of Flavius Josephus to tie them together. Then begin reading. You’ll soon discover that by whatever standard you decide to use, rules of evidence as used by an attorney, statistical probability as used by a mathematician, or forensic logic as used by a debater, the evidence of God’s existence will become as obvious as the nose on your face. You can take His word for that: “You will seek Me and find Me when you seek Me with all your heart.” (Jeremiah 29:13).

The Temples of the Bible – Part 2