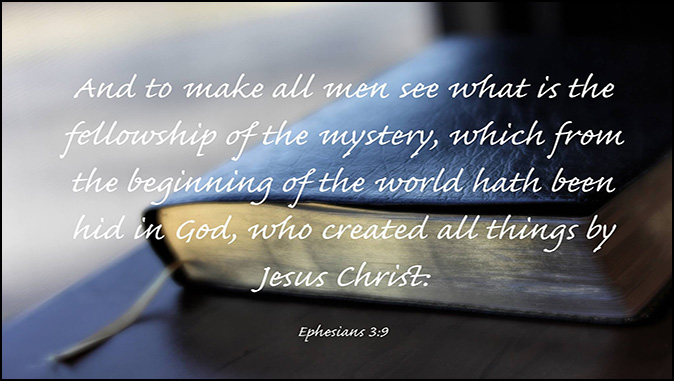 “Surely you have heard about the administration of God’s grace that was given to me for you, that is, the mystery made known to me by revelation, as I have already written briefly. In reading this, then, you will be able to understand my insight into the mystery of Christ, which was not made known to men in other generations as it has now been revealed by the Spirit to God’s holy apostles and prophets. This mystery is that through the gospel the Gentiles are heirs together with Israel, members together of one body, and sharers together in the promise in Christ Jesus.” (Ephesians 3:2-6)

From our study on whether the Church was foretold by the Prophets of Israel, the obvious question left unanswered was, “What did Paul mean when he said it was a mystery that was not made known to men in other generations?”

Well, the mystery was not about whether the Lord would reach out to the Gentiles, since Isaiah had made it clear that the Messiah would bring His salvation to all nations. The mystery was in how He would do it. As we saw from Acts 15:13-18 James was the first to say that Israel was being set aside for a time until the Lord took a people for his name from among the Gentiles, but that afterwards He would turn again to Israel. (Actually, the Lord had hinted at this in Matt. 21:43 when He told the Jewish leaders that the Kingdom would be taken away from them and given to a people who would produce its fruit. James was just clarifying His statement.)

With 20/20 hindsight, we can see a number of gaps in Old Testament prophecy into which the Lord has inserted the Church. But it’s mostly the kind of thing you can only see looking back from our perspective. It’s like a hidden path on a hiking trail that you can only see after you’ve passed it, and then only by looking back in the direction from which you’ve come.

(Some claim to have found 24 of these gaps and use that fact to help identify the 24 Elders in Rev. 4 as representing the Church after the Rapture. The fact that the Elders are wearing the crowns of over comers, which the Church will only receive after the Rapture, lends support to this view.)

As I said, we find these gaps in Old Testament prophecy, and one of the clearest ones is in Isaiah 9:6-7 where the Lord had Isaiah say:

“Unto us a child is born, unto us a son is given, and the government will be on His shoulders. And He will be called Wonderful, Counselor, the Mighty God, the Everlasting Father, the prince of Peace. Of the increase of His government and peace there will be no end. He will reign on David’s throne and over His Kingdom establishing it and upholding it with justice and righteousness from that time on and forever.”

The angel Gabriel told Mary that her son would fulfill this prophecy (Luke 1:33) but looking back we can see that it was only partially fulfilled during the Lord’s life. The child was born and the son was given, but that’s all. The rest awaits the 2nd Coming and in between is the Church.

The disciples stumbled on another one when Jesus said that the Temple would soon be destroyed in Matt. 24:2. They knew that 69 weeks (483 years) of Daniel’s 70 week (490 years) prophecy had passed, and that Herod had spent the previous 40 years building the Temple. And now Jesus told them it was going to be completely torn down just 7 years short of the time at which Daniel had said they would finish transgression, put an end to sin, atone for wickedness, bring in everlasting righteousness, seal up vision and prophecy and anoint the most holy (place). (Daniel 9:24) Without a temple this deadline couldn’t be met. Their amazement over the Lord’s prophecy led to the Olivet Discourse and the discovery of what we now realize is a gap between the first 483 years and the last 7. Once again, the gap was filled by the Church.

But even that didn’t reveal the mystery. No, the secret that blew everybody away was that the Gentiles were being made heirs of the Kingdom together with Israel, and that God was actually creating an entire new race of mankind, a spiritual one composed of both Jews and Gentiles but sharing a destiny with neither. Paul described this in Ephesians 2:14-16:

“For he himself is our peace, who has made the two one and has destroyed the barrier, the dividing wall of hostility, by abolishing in his flesh the law with its commandments and regulations. His purpose was to create in himself one new man out of the two, thus making peace, and in this one body to reconcile both of them to God through the cross, by which he put to death their hostility.”

Gentiles In The Old Covenant

From our side of the prophecies we can see that God intended this all along. But to get a feel for how this must have shocked the Jewish Apostles, lets take a look at the way Gentile converts to Judaism had fared under the Old Covenant. From the earliest times that Gentiles had come under the Law, they shared both its privileges and its responsibilities.

“Let no foreigner who has bound himself to the LORD say, “The LORD will surely exclude me from his people. Foreigners who bind themselves to the LORD to serve him, to love the name of the LORD, and to worship him, all who keep the Sabbath without desecrating it and who hold fast to my covenant – these I will bring to my holy mountain and give them joy in my house of prayer. Their burnt offerings and sacrifices will be accepted on my altar; for my house will be called a house of prayer for all nations.” (Isaiah 56:3, 6-7)

But especially in the 2nd Temple period there was a definite class distinction. The Temple itself was a good example of this. It was surrounded by a series of courts for the worshipers, each one separated from the others by walls and gates. Immediately outside the building where the altar of sacrifice was located was the Court of the Priests. Just beyond that was the Court of the Men, and surrounding it the Court of the Women. Together they formed the Court of the Israelites. Separated from the court of the Israelites by another wall with guarded gates was the outermost court, the Court of the Gentiles. On each gate of this wall of separation a sign was posted warning Gentiles not to proceed further on pain of death. Worse than the nosebleed seats at a sports arena, it was at least 100 yards from the altar, much more in most places, and behind a wall. While some Gentiles could hear what was going on, none could see. In addition, some believe that the money changers and animal sellers were allowed to set up shop in this court on holy days further limiting the Gentiles’ opportunity to worship the Lord. Jesus quoted the Isaiah passage above in condemning the Jews for this.

Now Paul was saying that Gentiles would be elevated to a place of equality with the Jews as “those who once were far away have been brought near through the Blood of Christ.” (Ephesians 2:13)

In the Book of Acts there two occasions of new believers speaking in tongues. Both involve Gentiles in the presence of Jews. In Acts 10 it was the guests in the home of Cornelius and in Acts 19:6, it was a group of men in Ephesus, part of modern Turkey. Acts 10:45-46 says, “The circumcised (Jewish) believers who had come with Peter were astonished that the gift of the Holy Spirit had been poured out even on the Gentiles. For they heard them speaking in tongues and praising God.”

Acts 19 is similar. I believe these two experiences were recorded for the express purpose of showing the Jews that Gentiles could receive the Holy Spirit just as they had, as Acts 10:45 explains. God was making sure they knew that in the Church both would be equal. These are the only two places mentioned in the Book of Acts where speaking in other tongues accompanied salvation. (It’s interesting that one happened before the believers were baptized and the other one happened after.)

Through the Church Jew and Gentile would become one in Christ, whether male or female, slave or free. (Gal. 3:28) They would serve as the highest and best examples of the incomparable riches of God’s grace. His work of art, His masterpiece. (Ephes. 2:6-10) All their imperfections would be healed and they would finally be what God intended, as perfect as He is, immortal and incorruptible (1 Cor. 15:53) Their eternal home would also be a work of art, made of the finest gold and precious stones, 2000 years in the making. Nothing impure will ever enter it, neither will there ever be any death or mourning, or crying or pain there. (Rev. 21) They would be joint heirs with Christ and co-regents of His universe, dwelling in His presence forever in a perpetual state of bliss.

Not even at the height of Solomon’s glory had the world ever witnessed such a thing as the Lord has planned for the Church. And while it’s available to Jew and Gentile alike, it appears that the Church will be populated mostly by Gentiles.

So Paul’s mystery wasn’t that the Lord would reach out to the Gentiles, it was that He would do it so lavishly. This is why Paul wrote:

It was obvious to anyone who read the Bible that God was going to include all the nations in His plan for salvation. But until God revealed it to His Holy Apostles and Prophets, no man on Earth had ever imagined what that would mean for us. That was Paul’s mystery. Selah.

Be Perfect, As Your Heavenly Father Is Perfect

Be Perfect, As Your Heavenly Father Is Perfect A Bible Study by Jack Kelley Matt.…

The Sermon On the Mount, Continued

The Sermon On the Mount, Continued A Bible Study by Jack Kelley In our study…

The Sermon On The Mount, Conclusion

The Sermon On The Mount, Conclusion A Bible Study by Jack Kelley The final installment…

Contrasting Covenants and Confirmations – Part 1 By Randy Nettles Terah, the father of Abram…

Shine On! By Randy Nettles “In the beginning, God created the heavens and the earth.…