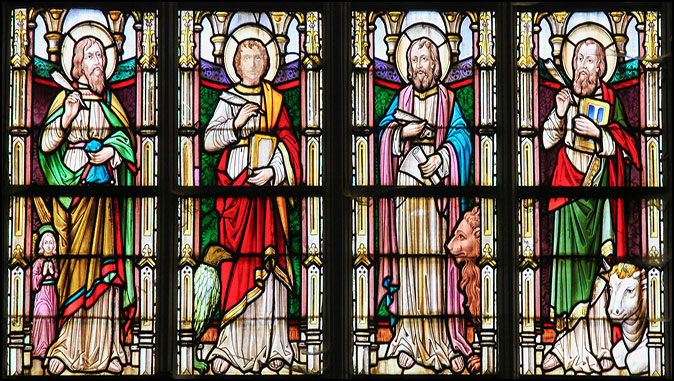 Why Do We Need Four Gospels?
A Bible Study by Jack Kelley

We are often asked, “Why four gospels? Couldn’t Matthew, Mark, Luke, and John have agreed on their stories and written just one?”

Purpose of the Gospels

Liberal scholars confuse the issue by calling Matthew, Mark, and Luke the “synoptic” gospels claiming that Mark wrote his first and the others all relied on it in developing their accounts. Then there’s the “Q” document theory, which says that an undiscovered “quelle” (Latin for source) document upon which all the writers relied for their information was actually the earliest gospel account.

Remember that these hypotheses are advanced by critics who dispute the Bible’s supernatural origin and whose primary goal is to deny the importance of literal interpretation. They prey on our ignorance, so their opinions are easily put to naught when we discover the underlying purpose of the four Gospels. First, we need to understand that none of the Gospels were written solely to provide an accurate historical account of the life of Jesus.

Each Gospel account is directed at a specific audience with events portrayed in such a way as to be meaningful to that audience. The role of Jesus, the use of phraseology, the inclusion or exclusion of events, and the emphasis on first and last miracles are all meant to underscore the point of the particular gospel. I’ll show you what I mean.

Matthew: Who Was He?

Matthew was written to the Jews. His purpose was to demonstrate who Jesus was — presenting overwhelming evidence that Jesus was Israel’s long-awaited Messiah. That He was the Lion of Judah, the King of Israel. The genealogy in Matthew begins with Abraham and runs through King David (Matt 1:1-17). The most frequently used phrase in Matthew’s Gospel is “it was fulfilled.” There are more references to events foretold in Old Testament prophecy and fulfilled in the Life of Jesus in Matthew than in any other gospel account. Partial copies discovered in the caves at Qumran suggest that Matthew may have originally been written in Hebrew. The first miracle in Matthew, the cleansing of a leper, was highly symbolic for Israel. Leprosy was viewed as a punishment for sin, and cleansing a leper signified taking away the sin of the nation. Matthew’s gospel ends with the resurrection signifying God’s promise that David’s Kingdom would last forever.

Mark: What Did He Do?

Mark’s gospel is actually Peter’s account and was written to the Romans. His purpose was to portray Jesus as the obedient servant of God. Since no one cares about the heritage of a servant there is no genealogy in Mark. The most frequently used phrase in Mark’s Gospel is “straight away” sometimes translated immediately, so Mark is called the snapshot gospel, giving us picture after picture of Jesus in action. The first miracle is the casting out of a demon, demonstrating that the God whom Jesus served was superior to all other gods, a matter of great importance in Rome’s polytheistic society. Mark’s gospel ends with the ascension, signifying that the servant’s job was finished and He was returning home.

Luke: What Did He Say?

Luke’s account portrays Jesus as the Son of Man, a title Jesus often used of Himself, and was written to the Greeks. Luke presents the human side of Jesus and emphasizes his teaching. Greeks were famous for their storytelling form of oratory, so the most frequent phrase in Luke is “and it came to pass.” Most movies of the life of Jesus rely primarily on Luke’s gospel because of its flowing narrative form. Luke’s genealogy traces Jesus all the way back to Adam, the first man (Luke 3:21-38). Since the Greeks, like the Romans, were a polytheistic society, Luke used the casting out of a demon as his first miracle, and ended his gospel with the promise of the Holy Spirit, uniting man with God.

John: How Did He Feel?

John wrote to the church describing how Jesus felt about peoples’ reaction to His ministry. His goal was to convince us that Jesus is the Son of God. His gospel is the most unique, based upon 7 miracles, 7 “I Am” statements and 7 discourses. John pays little attention to chronology, sometimes placing events out of order (like the Temple Cleansing in Chapter 2) for their effect in presenting Jesus as the Son of God. John’s gospel covers only about 21 days out of the Lord’s 3 1/2 year ministry. 10 chapters are devoted to one week and one-third of all the verses in John describe one day. His genealogy begins before time and identifies Jesus as the Eternal One Who was with God and Who was God (John 1:1-2). The most frequently used phrase in John is “Verily, verily”, or truly, truly. His first miracle was changing water into wine, an act of enormous symbolism by which He “revealed His Glory and His disciples put their faith in Him” (John 2:11). John’s Gospel ends with the promise of the 2nd Coming.

So why four gospels? Because no single one is big enough to contain all of the attributes of Jesus. It took all four to show His four faces as The Lion of Judah, the Obedient Servant, the Son of Man, and the Son of God. Trying to put all four perspectives into one account would have left us hopelessly confused. We must read all four Gospels to understand all of Who Jesus is.

In views of the Throne of God, four powerful figures called cherubim are shown guarding the throne. Sometimes it appears that each of the four has a different face, and sometimes it seems that all have four faces, but the faces are always those of a Lion, an Ox, a Man and an Eagle (Ezek. 1:10 & Rev 4:7). When the Jews camped in the wilderness after leaving Egypt, they were instructed to set up in four sub-camps, one for each point of the compass with the tabernacle in the center. The first was called the Camp of Judah and included Issachar and Zebulon. Members of those three tribes would look for the ensign of Judah, a flag with a large lion embroidered on it, to locate their campground. It was always due east of the tabernacle. The second camp was named after Ephraim and included Manasseh and Benjamin. It was positioned opposite the camp of Judah to the west of the tabernacle. Ephraim’s flag depicted the figure of an ox. The third camp was headed by Reuben and included Simeon and Gad. Reuben’s flag showed the face of a man. They were located south of the tabernacle. The fourth camp was that of Dan with Asher and Napthali included and was located in the North. Dan’s flag pictured a large eagle.

Looking down from above, God would see the camp of Israel with the tabernacle in the Center and the four sub-camps around it. The large flag waving in the East pictured the Lion, and opposite it in the West was the Ox. To the south was the face of a Man and to the North was the Eagle. Some say God was modeling His throne in the Camp of Israel with the tabernacle representing His throne in the center, the four flags representing the four faces of the cherubim and the four sub-camps extending along the four points of the compass, forming a cross.

Some also see the four gospels symbolized in the four flags; the Lion for Matthew, the Ox for Mark, the Man for Luke, and the Eagle for John. In this view, the tabernacle is seen as a model of Jesus, at the center of the four gospels.

How you see these models, or if you see them at all, is secondary to my main purpose in writing this. My main purpose is to encourage you to delve into all four gospels. It’s really the only way to get a good look at the four faces of Jesus.