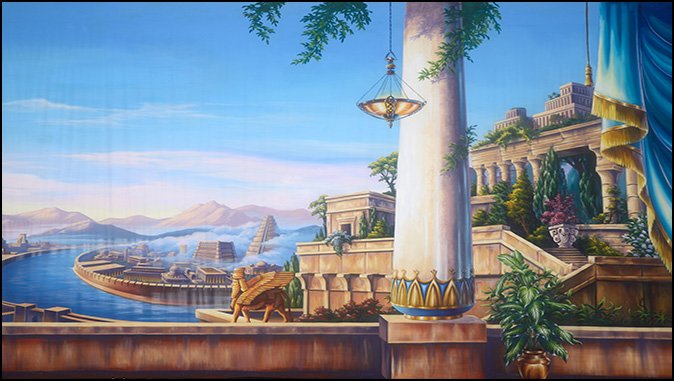 Mystery Babylon…What’s The Mystery?
A Bible Study by Jack Kelley

Since 9/11,  it has been popular to identify Mystery Babylon as New York City.

Consider, though, the following:

The above three points against this don’t seem to bother those in favor of this view.

The late Dr. David L. Cooper advised, “Where the plain sense of Scripture makes common sense, seek no other sense; therefore take every word at its primary, ordinary, usual, literal meaning unless the facts of the immediate text clearly indicate otherwise.” It’s come to be known as the Golden Rule of interpretation. We’ll apply it to see what the Bible says about Mystery Babylon.

The first place to look is the only place it’s mentioned, Revelation 17. There the words “Mystery Babylon the Great” appear, written on the forehead of a symbolic woman seated atop a symbolic beast with seven heads and ten horns in a vision John was given. We know they’re symbolic because in the passage the angel describing them says so, and tells us what they symbolize. This fits with Dr. Cooper’s rule.

The angel explained to John that the beast symbolized Satan, who would become the object of worship in the world and manifest himself in one we call the antichrist. The seven heads were seven hills and also seven kingdoms. Five of these had fallen when John was writing (Egypt, Assyria, Babylon, Persia, and Greece) one was currently in power (Rome) and one was still to come (hold that thought). The ten horns were ten kings who didn’t yet have a kingdom but would each receive one for the purpose of serving the antichrist and making war against the Lord. And finally, the woman was the city that in John’s time was ruling over the world.

So far we have three references to Rome. It sits on seven hills, it was the kingdom currently in power, and it was the city from which the world was ruled. Most scholars accept the fact that in John’s time, when the Revelation was written, the vision of the woman on the beast represented Rome, and that’s why she was called Mystery Babylon.

(In the Greek language, the word we translate mystery literally means a revealed secret. The pagan religious system first practiced in Babylon had been transplanted to Pergamus in Biblical times (see Rev. 2:12-17) but in the 4th century AD would be merged with Christianity in Rome. That’s the secret John was revealing.)

Throughout much of church history Mystery Babylon has been a euphemism for Rome. But what about today?

The Roman Empire was never really defeated in the sense that the other ancient kingdoms were. It was split up and parts of it were overcome, but in the 300’s it was transformed into the Holy Roman Empire and for all practical purposes ruled over Europe until the 1500’s. And even after that parts of the old Roman Empire were pre-imminent in the world for a time, specifically Spain and England.

Currently the USA is the undisputed super-power, but lately, the European Union has begun challenging the USA for leadership in the world. This turn of events is particularly interesting to prophecy buffs because of Daniel 9:26. “After the sixty-two ‘sevens, the Anointed One will be cut off and will have nothing. The people of the ruler who will come will destroy the city and the sanctuary. The end will come like a flood: War will continue until the end, and desolations have been decreed.”

Those of us who believe that this portion of Daniel’s 70 weeks prophecy is still in the future, knowing that the Romans destroyed the city (Jerusalem) and the sanctuary (The Temple) in 70 AD, believe that it predicts a ruler emerging from a revived Roman Empire at the end of the age. This ruler is called the antichrist by most, who also see the European Union as a revival of the Roman Empire. That being the case, the kingdom described to John in Rev. 17 as the one that was still to come would be the European Union, a modern version of the Roman Empire.

When the antichrist comes to power, we believe he’ll divide the world into 10 regions and place a leader over each of them, hence the 10 kings loyal to him.

Seeing Rome as both the 4th and 5th kingdoms of John’s vision fits with other prophecies as well. For instance, in Daniel 2:7 we’re given two views of Gentile Dominion, the time in world history when gentile powers are superior to Israel. In both, the dream Daniel interprets in Daniel 2 and his parallel vision of monsters coming out of the sea in Daniel 7, there were only four gentile kingdoms identified from Daniel’s day to the Kingdom Age. By comparing the symbolism of the visions with what we know of history, we can identify the first one as Babylon, in power when Daniel was alive having conquered both Egypt and Assyria. Then came the Medo-Persian Empire, followed by Greece and finally Rome. The only kingdom after Rome is the Kingdom of our Lord, a Kingdom that will never be defeated or given to another. So Rome is the last Gentile world power before the Lord’s return.

In Nebuchadnezzar’s dream (Daniel 2) of the huge poly-metallic statue that symbolized the four Gentile powers, the two legs of iron represent Rome’s Eastern and Western components that ultimately became the Holy Roman Empire’s Catholic and Orthodox churches. The feet and toes of iron mixed with clay stand for the End Times Revival of the Empire and signify the problems that have plagued Europe’s attempts to unite (iron and baked pottery neither mix nor adhere well) as well as the 10 regions (the toes) into which the Antichrist will divide the world. Interestingly, it was the Treaty of Rome that in 1957 gave the European Union its beginning. So the clear hints of the two incarnations of Rome have now been verified in history.

So how does all that relate to literal Babylon? Rev. 18 claims that in the final days the City of Babylon will once again be a world center for government, commerce, and religion and describes the worldwide distress caused by its destruction just before the Lord’s return. For years scholars, believing Babylon to have been destroyed long ago, searched for the modern city they believed the passage to be symbolizing, and many chose New York. But during the first Gulf War, they discovered that ancient Babylon had never been destroyed in the way the Bible describes. Further research showed that it’s been continuously inhabited since the days of Nebuchadnezzar and that Saddam Hussein had expended much effort in restoring it. More on this below.

But before we go on, let’s understand a little more about why some believe Rev 18 describes New York City. Being home to the UN it could be considered the center of world government, the New York Stock Exchange has a tremendous influence over world commerce, and of course, it’s located in the USA, the most obviously Christian nation in the world today which connects it with a major religion. And then there’s the indisputable fact that having been so richly blessed, the US certainly deserves to be judged, and New York is arguably its most prominent city.

What Makes You So Great?

Biblical scholars from other countries complain that only the arrogance of Americans causes us to look for ourselves in the Bible. Sure we’re on top now, but the US is such a newcomer on the world scene, barely over 200 years old in a history that at its most conservative estimate stretches back over 6000 years. And the battle between the city of Satan (Babylon) and the city of God (Jerusalem) had been raging for several thousand years before America was even discovered. In a nutshell, the long view of history argues persuasively for reading Rev. 18 literally. If so, how does Babylon get to be center stage again after so many centuries of obscurity?

He’s Up In The Night

In the Book of Zechariah, a series of night visions concerning the end times occupies the first six chapters. The one recorded in Zechariah 5 gives us the answer. Zechariah describes being told in this vision to inspect a large basket with a lead cover. An angel tells him the basket contains the iniquity of the people throughout the earth. When he looks inside, he sees a woman, who the angel identifies as the symbol of their wickedness. Then two other women, each with the wings of a stork, lift the basket and begin to fly away with it. (According to Lev. 11:19 storks would be able to carry this load of wickedness without becoming defiled by it because they’re already unclean.)

“Where are they taking the basket?” Zechariah asks. “To the country of Babylon,” the angel replies, “To build a house for it.” (Literally to the plains of Shinar, the location in ancient Mesopotamia of the City of Babylon). “When it’s ready, the basket will be set there in its place.” (Zech. 5:5-11). The fact that an actual physical location is given for the basket’s final destination should discourage anyone from spiritualizing that part of the passage. Again we’ve applied Dr. Cooper’s Golden Rule of interpretation.

Where Are They Coming From?

OK, so we know where the basket is going, but where will the stork-women be taking it from? According to many scholars, the woman in Zechariah’s basket is the woman from Rev. 17, Rome. At the end of the age, after all its true believers have been whisked away in the Rapture, the religious system currently headquartered in Rome will be returned to Babylon from whence it came, to be absorbed into antichrist’s one world religion. (The End Times Empire will also be absorbed, but into antichrist’s one world government, bringing the world’s political, commercial, and religious power together under one central authority.)

Zechariah’s visions followed Babylon’s defeat by the Persians. And almost from his day to ours, Babylon was a forgotten city. Although Alexander the Great later lived and died there, his plan to dredge a big harbor to lure Persian Gulf boat traffic to Babylon was never implemented. After his death, a natural harbor was found on the Tigris River and soon became the regional center of commerce Alexander had envisioned. The city that grew up around this harbor was named Baghdad. Although only about 62 miles (100 km) away, Babylon slowly faded into obscurity dwindling to as few as 10,000 inhabitants. It was never again a center for government, commerce, and religion, but neither was it ever destroyed as Revelation 17-18, Isaiah 13-14 and Jeremiah 50-51 all prophesy. These events are still in our future.

As I indicated earlier, Saddam Hussein spent millions restoring ancient Babylon into a ceremonial city, perhaps unknowingly preparing it for its final role in world events. Since the Lord is committed to doing all that He’s promised (Isaiah 46:8-11), when the time is right, the basket symbolizing the world’s wickedness will be set in the place prepared for it on the plains of Shinar. And then the ancient City of Babylon will once again become the world headquarters for the three great evils of mankind’s design:

Does the City of New York deserve to be judged? Absolutely, along with the rest of America, and most of the world for that matter. But is New York the Mystery Babylon of Rev. 17-18? I hope this article has persuaded you otherwise. But to be sure, become a Berean and search the Scriptures daily to see whether these things be true. (Acts 17:11)