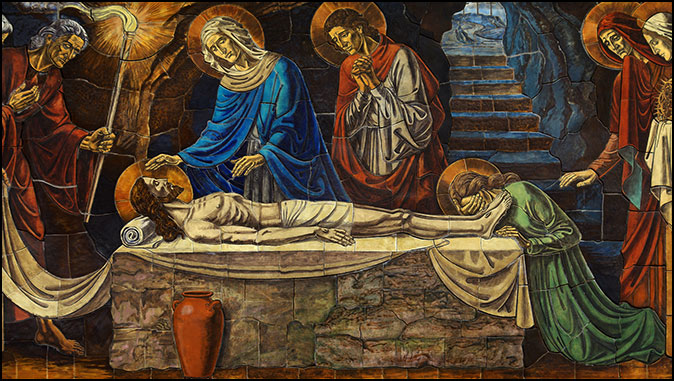 Note: This article is one of Jack’s Bible Through the Eyes of its Writers category, which is one of my favorites! Written in the first person as if Mary Magdalene herself is telling us her story. Enjoy! – Samantha

I am Mary of Magdala, or Mary Magdalene, so named because I came from the village of Magdala, located on the western side of the Sea of Galilee, between Tiberius and Capernaum, and not far from Nazareth.  It also helped to distinguish me from the several other women named Mary who were associated with Jesus during His ministry.  Just as Peter was considered to be the informal head of the male disciples, I was considered to be the head of the females.  I was with the Lord through much of His ministry and, along with the other women, helped to provide His financial support.  Several of us came from families of means and since the men had left everything to follow the Lord, we did our part by making sure there was enough money to pay the bills.  The Lord had healed us all of various diseases so we were happy to be able to contribute to His work in this way.

I was present at the Lord’s crucifixion, and was the first one to see Him after His resurrection.  This is my story of that glorious day.

Some of the other women and I hurried quietly through the streets of Jerusalem toward the Damascus gate.  We were trying not to attract any unwanted attention in case the officials were looking for us. It was just barely sunrise on Sunday morning, the first day after the Sabbath that followed the Passover. We could hear the priests at the Temple blowing the shofar announcing the Feast of First Fruits, the dedication of the spring harvest.

Normally we didn’t wait so long before preparing a body for burial but by the time Joseph and Nicodemus had gotten the Lord’s body off the cross and laid Him in Joseph’s tomb it was nearly sundown and the special Sabbath known as the Feast of Unleavened Bread was about to begin.  When it did, no more work would be permitted.  So after seeing where they put His body we rushed home to prepare the spices and perfumes we would need for His burial.  The day after Unleavened Bread was the regular Sabbath, and again no work could be done. But finally it was Sunday morning, the 3rd day since His death, and we could properly cleanse the body and apply the aromatic spices whose aroma would mask the smell of decay while the body decomposed.

We’d spent the last three days hiding in fear of the Temple Guard and trying to get over the shock of His death. Maybe you can imagine what an emotional time we were going through.  Just a week earlier, on the day you call Palm Sunday, we had accompanied Jesus into Jerusalem to shouts of “Hosanna, hosanna to the Son of David … Blessed is He Who comes in the Name of the Lord!” Then there was that incident at the Temple on Monday when He drove out the money changers, and the constant tension between Him and the officials in the days afterward.  His betrayal and arrest, and His trial and execution all took place on Thursday, and then He was gone.   Talk about extremes.  Of course, this is exactly what He told us would happen.  But believe me when I say that  talking about it and experiencing it were two different things.

Among all of us, I was perhaps the only one who truly had a grasp of what this was all about, but even I couldn’t keep from glancing furtively over my shoulder to make sure no one was following, and the pain I felt at having lost Him was almost unbearable. But life goes on, and there was finally some work we could do. Maybe that would help.

As I look back on that morning, I realize we had no idea how we were going to get into His tomb, but our tradition required that a dead body be made ready for burial as soon as possible.  So we had to find a way to get the tomb opened and we had to do it that very day.

We felt the earthquake as we were nearing the tomb, but nothing could have prepared us for what we saw when we got there. The huge stone that had sealed it was rolled away, and there was a man whose clothing shone like the sun sitting on it. He told us the tomb was empty, that Jesus had risen just like He said He would. We couldn’t believe it! “See for yourselves,” he said, “Then go and tell His disciples that He’ll meet you all in the Galilee.”

I was in shock! I guess my time of emotional extremes wasn’t over yet.  I don’t remember where the other women went, but I wandered around in a daze crying my eyes out until I came upon a man I thought was the gardener.  When he asked why I was crying, I foolishly asked him where he had taken the body. “Tell me where you put Him,” I said, “And I’ll bring Him back.”

When He spoke my name I recognized His voice and falling to my knees, I clung to Him. No one was ever going to take Him from me again if I had anything to say about it!  I hadn’t recognized Him at first because I never expected to see Him alive again, at least not in this world. But the sound of His voice was undeniable.

“Don’t cling to me Mary,” He said. “I have not yet returned to the Father.” Much later I understood Him to mean that he was on His way to the real Temple, the one in Heaven, in the role of our High Priest.  There He would sprinkle His own blood on the altar and perform His final act of atonement for our sins, just as the law required. Reluctantly I let Him go, and ran back to the disciples like He told me to.

Of course, they didn’t believe me. After all, this was a man’s world and I was only a woman. What could I know? But Peter and John went to see for themselves and finally, finally, they got it. He had risen from the dead. He was alive. In a great rush of comprehension they finally believed in their hearts that which they previously had only considered in their minds.  Later that day two of the other disciples also reported seeing and talking with Him on the road to Emmaus, but we got the ultimate confirmation that night when He appeared to us in the upper room.

The implications were staggering. He had taken upon Himself all the sins of the world as He was nailed to the cross, and had paid their enormous penalty with His life.  Then He went to stand before the throne of God the Father Almighty. God cannot tolerate the presence of sin, so if even one tiny sin among all those that ever had or ever would be committed by mankind remained on Him, Jesus could never have escaped the tomb to stand before Him. His resurrection was absolute proof of the certainty of ours. From the first human to the last, all who accept in faith the pardon that His death had purchased for us would be forgiven and receive eternal life. It was unbelievable!

And of course there would always be some who wouldn’t believe it. Thomas, who had been missing that first Sunday evening, serves as their example.  Even after hearing other reports from disciples who had seen Jesus, Thomas refused to believe until he had absolute proof.  A week later we were all together again and Thomas was with us. Suddenly Jesus appeared in the locked room. “Shalom alechem,” He said, which means “Peace be with you.”

Calling Thomas over, He had him put his finger into the nail prints in His hands and the wound in His side. “Stop doubting and believe,” He said.

Thomas fell to his knees saying, “My Lord and my God.”

“Because you have seen you believe,” Jesus said. “Blessed are those who have not seen and yet have believed.”

By saying this, He was pronouncing a special blessing on those who would become part of the Church, that great body of believers who accept in faith the validity of events I witnessed first hand. In all of humanity, the church is singled out and set apart for special blessing for that reason alone.

Over the next 40 days before His ascension, Jesus appeared to more than 500 people, and later came back to personally prepare Paul to carry His message to the Gentiles.  Through this instruction Paul came to understand the essential requirements of salvation. If you confess with your mouth, “Jesus is Lord” and believe in your heart that God raised Him from the dead you will be saved (Romans 10:9). It stands to reason. I mean if you can’t believe that God would raise His own Son from the dead, how can you believe He would do it for you?