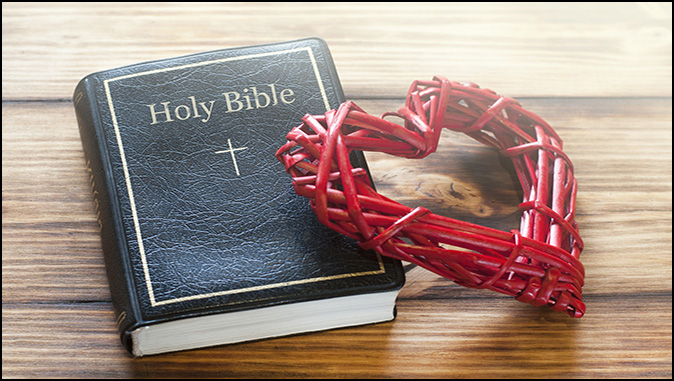 Love Is A Verb
By Jack Kelley

“Husbands, love your wives, just as Christ loved the church and gave himself up for her.” – (Ephes. 5:25)

The Church is His consuming desire. He lived so that she might come into existence and be set apart. He longs for her to know how much He loves her. His every word and action brought her honor and expressed His devotion to her. He dedicated Himself to her and covered all her imperfections with His love. And He gave His life for her.

Truth be told, the Church has rarely if ever deserved or even appreciated such a love. Within the lifetimes of the Apostles, the Church had already drifted off into a pattern of religious works, forsaking her first love in the process. (Rev. 2:4-5)

My wife has to be one of the easiest women in the world to love. I know that a lot of you guys feel that way about your wives, but in my case it’s true. Beautiful, happy, and energetic, she lights up any place she walks in to. When she enters a room, men and women alike are naturally drawn to her. People look at us and see the relationship they would like to have, and I’m often asked to teach them how to have such a good marriage as ours. I don’t know what I’d have done if I had been called to love someone who treated me the way the Church treats the Lord. I guess He knows I could never do it and that’s why He’s given me Samantha.

But recently I’ve discovered just how much of a commitment is required to love even someone as easy to love as she is, and I’ve learned anew that love is a verb, not just a feeling or emotion. Even the strongest marriage can come under attack if it’s taken for granted or ignored. With our ministry requiring more and more time and attention, and with the ever present and often conflicting demands of family, I discovered that I haven’t been paying enough attention to my primary responsibility, loving my wife.

As I imagine is true with most men, I first noticed the problem when I began feeling a lack of love and affection directed at me. I discovered that while I had become busy with ministry work, she had become more focused on our 4 year old. Without realizing it or even intending it, each of us had found a new source of love. We were living parallel, instead of interconnected, lives. The two were no longer one, in violation of Genesis 2:24. And as hard as this is to believe, it happened even though my office is in our home and neither one of us ever goes anyplace, or even takes a meal, without the other. We’re always in close proximity, yet we were hardly ever together. Believe me, it’s a real wake up call to realize that you’ve been ignoring the love of your life. What would I ever do without her?

I think a marriage is like a garden. If you want a garden to sustain you, you have to continually nurture it. You can’t just plant the seeds and then ignore it. Do that and you’ll get weeds instead of succulent fruits and vegetables. Leave even a fruitful garden untended for very long and you’ll find it’s also vulnerable to attack by predators who want to steal the fruits of your labor. And once in a while, a seed you didn’t know you had planted can begin to grow unnoticed until it blossoms into something beautiful but poisonous. Every gardener knows that the work begins before anything grows and continues unabated until the harvest.

And so it is with marriage. It’s a labor of love that begins before the wedding and ends when death parts us. Most of us know how to do the first part pretty well. It’s called the engagement. It’s exciting to begin planning and preparing for a future together, taking something that exists only in our imaginations and turning it into reality. But because we’ve been taught that the goal is to get married, it’s natural stop paying such close attention shortly after the wedding. We don’t realize that the real goal is to be married. If we worked as hard at being married as we did at getting married there would be many more happy marriages.

“Husbands, in the same way be considerate as you live with your wives, and treat them with respect as the weaker partner and as heirs with you of the gracious gift of life, so that nothing will hinder your prayers.” – (1 Peter 3:7)

And while we’ve been taught that marriage is the stable, permanent phase of a relationship, it’s really very transitional. Left to itself, marriage is simply the phase between engagement and divorce. The way we prevent this from becoming true in our case to make day to day decisions to stay as close to the engagement phase of the relationship as possible. That means we still date our wives, hold the door for them, compliment them on their wardrobes, buy them little things for no reason, listen to what they’re saying, ask their opinions and preferences, spend quality time together and in general put their needs above ours. In other words, love them. This not only pleases our wives, but according to Peter makes the Lord more attentive to our prayers as well. Everybody wins.

The Lord accused the church of being so busy doing His work that they had no time left for Him. We can become so busy building a life for our wives that we have no time for them. And I’ve never met a man who wasn’t perplexed when his wife didn’t accept his excuse for being away so much. “I’m only doing it for us.” We don’t understand that while our path to fulfillment lies in personal achievement, theirs is in relationships. If we’re to give ourselves up for them, that means applying our need for achievement to building and maintaining a great relationship. That way we’ll both be happier.

Obviously, if you’ve built a lifestyle that requires 2 or more incomes to support it, you’re in danger of trading long term love and respect for short term material gratification. There simply won’t be enough time or energy for both income production and relationship protection. It’s another good reason to scale back while you have the choice. When the hard times come, as they’re giving every indication of doing, you’ll find that it’s much easier to get along with out a bunch of stuff that you won’t have time for any way, than it is to get along without having someone you love at your side to help you through. Remember, love is not just something you feel, it’s something you do. Love is a verb. Selah.