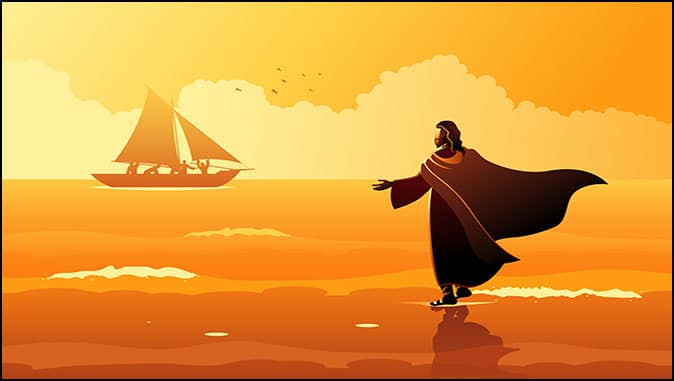 Jesus Walks on the Water
By Jack Kelley

Here is one of the truly remarkable bits of New Covenant symbolism to be found anywhere in Scripture.

Immediately Jesus made the disciples get into the boat and go on ahead of Him to the other side, while He dismissed the crowd. After He had dismissed them, He went up on a mountainside by Himself to pray. When evening came He was there alone but the boat was already a considerable distance from land, buffeted by the waves because the wind was against it. During the 4th watch of the night Jesus went out to them, walking on the lake. When the disciples saw Him walking on the lake they were terrified. “It’s ghost they said, and cried out in fear. But Jesus immediately said to them, “Take courage. It is I. Don’t be afraid.” (Matt 14:22-27)

This story also appears also in Mark 6:45-51 and John 6:15-21 and as in the feeding of the 5000 lots of additional insight can be gained by comparing all three accounts. All agree that this event followed immediately on the heels of the miraculous feeding, and that the disciples set out across the lake without Jesus, while He went up the mountainside alone to pray. If you read the preamble to the feeding of the 5000 you’ll recall that Jesus came to that remote area to be alone with His disciples to grieve the death of John the Baptist and hear the reports of their recent missionary tour. But their presence was discovered and they were followed by a huge group of people (Matt 14:13-14 & Mark 6:30). Putting aside His own needs, He ministered to the crowd, fed and dismissed them, and was now free to be alone. Perhaps sending the disciples out without Him was even an effort to divert the crowd and get some “face time” with His Father. John the Baptist was a relative (Luke 1:36) and had just been beheaded by Herod as a favor to his wife (Matt 14:1-12), and the 12 had just completed their first assignment, spreading the Gospel throughout Israel. It was time to check in.

In Matt 14:25 we are told that it was the 4th watch of the night (3-6 AM) and from John’s account that the disciples had only covered about 3-3 1/2; miles (1/2; the distance across the lake) (John 6:19) yet they had been rowing since early evening. They were straining at the oars but not getting very far. In fact Mark tells us that Jesus was making better time walking than they were rowing and was about to pass them by when they saw Him (Mark 6:48) even though they had a head start of several hours.

Thinking He was a ghost they were terrified. But Jesus calmed them by identifying Himself. “Take courage. It is I. Don’t be afraid.” By the way, the words translated “It is I” in verse 27 can also be translated “I am”, the same words spoken to Moses from the burning bush.

“Lord, if it’s you,” Peter replied, “Tell me to come to you on the water.” “Come,” He said. Then Peter got down out of the boat, walked on the water and came toward Jesus. But when he saw the wind he was afraid, and beginning to sink cried out, “Lord, save me.” Immediately Jesus reached out His hand and caught him. “You of little faith,” He said. “Why did you doubt?” And when they climbed into the boat the wind died down. Then those who were in the boat worshipped Him, saying, “Truly, You are the Son of God.” His mastery over the laws of nature had persuaded them. (Matt 14:28-33)

Here is one of the truly remarkable bits of New Covenant symbolism to be found anywhere in Scripture. Let the boat and disciples represent Israel, the Sea the unbelieving world (Isa. 57:20-21) and Peter the Church. I’ll use the term Church here to mean anything from a single believer to the entire body of Christ, so it’s OK to take this personally as well as institutionally.

As long as Peter stayed focused on the Lord he was able to remain above the waves, empowered by his faith to perform a miracle and sustained by his closeness to the Lord. When he was distracted by the winds he began to sink and his life was in peril. As long as we stay focused on the Lord, we’re able to remain above the ways of this world, empowered by our faith to perform miraculous works and sustained by our closeness to Him. When we’re distracted by the winds of controversy and deceit, we begin sinking into the world’s unbelieving ways and our spiritual life is in peril.

One more point. When Peter and the Lord got safely back into the boat, the wind died down and calm returned. When Israel and the Church are finally re-united in Christ, peace will reign in the world. In both cases the Lord’s gentle rebuke to Peter is appropriate. To both Israel and the Church He says, “O you of little faith. Why did you doubt?”

The Parable of the Shrewd Manager…Part 1

The Parable of the Shrewd Manager...Part 1 A Bible Study by Jack Kelley Jesus told…

The Parable Of The Shrewd Manager…Part 2

The Parable Of The Shrewd Manager...Part 2 A Bible Study by Jack Kelley “For my…

God's Argument Against Evolution By Jack Kelley (Note: Following up on the recent evolution/ creation…