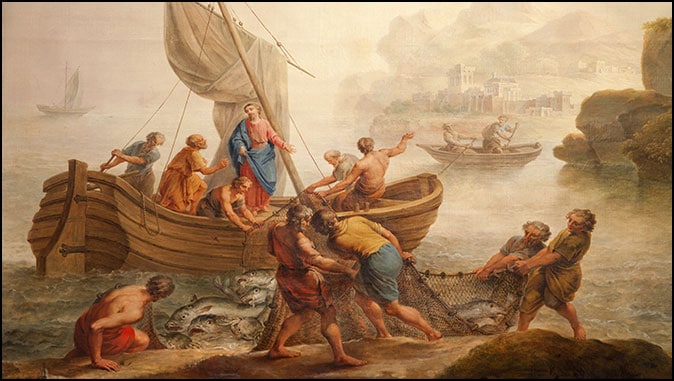 Jesus And Peter
By Jack Kelley

As Jesus was walking beside the Sea of Galilee, he saw two brothers, Simon called Peter and his brother Andrew. They were casting a net into the lake, for they were fishermen. “Come, follow me,” Jesus said, “and I will make you fishers of men.” At once they left their nets and followed him. (Matt 4:18-20)

According to John’s gospel Jesus and Peter first met after John the Baptist introduced Jesus to two of his disciples as “The Lamb of God, Who takes away the sin of the world.” (John 1:35). Andrew, one of those disciples, immediately rushed to inform his brother Peter that he had seen the Messiah. Peter and Andrew were fishermen from Bethsaida, a fishing village (Bethsaida means “House of Fishing”) on the northeastern shore of the Sea of Galilee. Jesus of course was known as a carpenter’s son who grew up in Nazareth, a town about a day’s walk up into the steep hills that separated the Galilee from the plains of Megiddo to the west.

Take Me To Your Leader

Andrew brought Peter to meet Jesus and within a day or two Jesus had asked them to follow Him. James and John, another pair of brothers who were also fishermen, were the next two disciples chosen and these four became the closest ones to Jesus, forming an inner circle of sorts. And of the 12, Peter became the group’s informal leader.

Peter’s small town naivete and unabashed machismo teamed up to make him a take charge kind of guy, and Jesus seemed to take a special delight in him. Peter’s periodic bouts of “foot in mouth” disease must have given the Lord countless hours of laughter.

But it was his courage that most distinguished him. When Jesus approached the disciples’ boat, walking on the water, it was Peter who got out of the boat and walked across the water toward him (Matt. 14:28-31). It was Peter who made the first public declaration of the Lords’ true identity as the Messiah of Israel (Matt. 16:13-16). When they were surrounded by a large contingent of armed temple guards on the night of the Lord’s arrest, it was Peter who drew a sword and cut off Malchus’ ear (John 18:10). He was ready to take on the whole bunch.

That’s why it was such a shock to everyone when a powerless servant girl scared Peter into denying the Lord three times later that night. It was so out of character for him. Jesus had anticipated this, predicting that Peter would do just that after hearing him boast that even if everyone else deserted the Lord, he would not (Matt. 26:33-34).

Reverting to Peter’s original name, the Lord had said, “Simon, Simon, Satan has asked to sift you as wheat. But I have prayed for you, Simon, that your faith may not fail. And when you have turned back, strengthen your brothers.” (Luke 22:31-32)

What an amazing thing to say! First of all, notice that Satan had to ask permission before he could touch the disciples (the Greek word for “you” in the first sentence is plural) and then see that Jesus was already interceding for Peter. Not that he would be spared his ordeal, but that his faith would be strong enough to sustain him through it. Finally Jesus told Peter to strengthen his brothers after his ordeal was over, showing that the Lord’s prayers on Peter’s behalf had already been answered.

None of what Peter was going to do would catch Jesus by surprise, and from His perspective, none of it would cause the slightest change in their relationship. But Peter’s failure would humble him, give him more compassion and make him a better leader. And the other disciples would be comforted in that the failure of their courageous leader would somehow make their own failures easier to bear.

Paul would later write, “Praise be to the God and Father of our Lord Jesus Christ, the Father of compassion and the God of all comfort, who comforts us in all our troubles, so that we can comfort those in any trouble with the comfort we ourselves have received from God.” (2 Cor. 1:3-4)

Someone has paraphrased these verses saying, “Our life is a ministry and our sorrows are our credentials.” Peter’s sorrows would make him a more effective minister to his flock. And the Holy Spirit would use Peter’s new-found compassion to demonstrate just how dramatic a change can be wrought in the life of a willing believer. His sermons in Acts 2:14-39 and Acts 3:11-26 must have astounded and amazed those listeners who had known him for any length of time.

Do You Still Love Me?

Perhaps the best way to understand the extent of the Lord’s faithfulness to Peter is to listen in on his so-called reinstatement. We’ll need to insert the Greek words for love to get the full impact.

When they had finished eating, Jesus said to Simon Peter, “Simon son of John, do you truly love me more than these?” The word He used for love here is “agapeo”, which in the Greek language is the highest and purest form of love.

“Yes, Lord,” he said, “You know that I love you.” But Peter used the word “phileo” which denotes a brotherly love or affection, a much less intense form of love. Jesus said, “Feed my lambs.”

Again Jesus said, “Simon son of John, do you truly love me?” (agapeo) He answered, “Yes, Lord, you know that I love you.” (phileo) Jesus said, “Take care of my sheep.”

By backing down to Peter’s all too human level of love, Jesus completed the reinstatement, in effect saying, “I know you’re giving me all the love you can and it’s enough.”

And so it is with us. None of what we’ll ever do can catch Jesus by surprise, and from His perspective, none of it can cause the slightest change in our relationship with Him. He knew every one of our sins before He went to the cross, and gave His life so we could be cleansed of all of them. We can’t surprise Him, we can’t disappoint Him, and we can’t let Him down. If He chooses to deliver us from a situation, He can. If not, He’s at the right hand of the Father interceding for us, praying us through it just like He was with Peter (Romans 8:34). And like he did with Peter, He’ll use the situation to make us a better model of what His love can accomplish in the life of a willing believer. Selah.